UCL MotionInput v3 could transform the way millions of people use their computers, thanks to an innovative project involving UCL, Intel, Microsoft, IBM and the NHS. 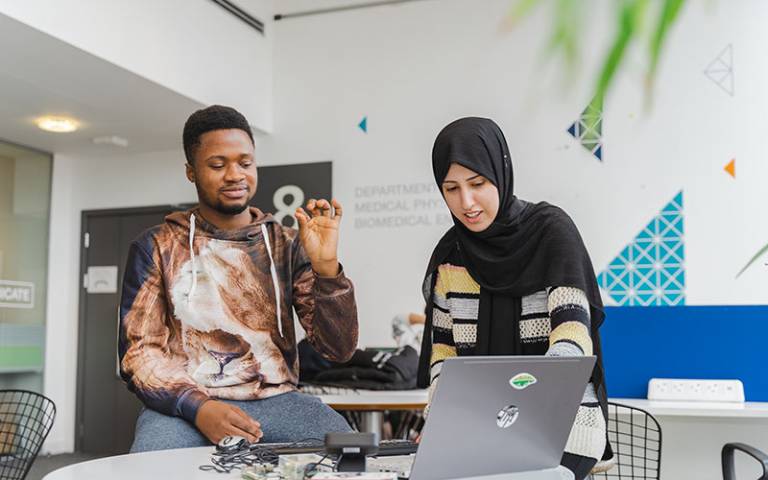 If people are using communal computers in places like hospitals and schools, what can be done to lower the COVID-19 transmission rates? And, alongside that, how can new technology help us make computer access more equitable for all, including people with physical disabilities?

That was the problem Professor Dean Mohamedally set for his students across several of his undergraduate and master’s Computer Science courses back in 2020.

This revolutionary piece of software allows people to use their computer without touching a keyboard or mouse. Instead, they can control what’s happening on screen using their own combination choice of voice commands, facial expressions or physical gestures captured by their webcam. For example, by moving their hands and pinching in the air. Although other systems have enabled some of these options, MotionInput v3 is the first to combine all of them into a single system.

As well as minimising the spread of COVID-19, the technology has huge potential for people with conditions like Motor Neurone Disease (MND).

A team approach to solving problems

Chair of IXN for Good, and PhD candidate at the UCL Interaction Centre, Sheena Visram was Clinical Lead on the project. She explains that UCL MotionInput was all about working with industry partners to solve real problems.

“We wanted to bring academic and industry expertise together to create something that could make a real difference to people’s lives with this. And, at the same time, give our students skills they could take with them into their careers by giving them a tangible problem to solve with the latest innovations in artificial intelligence and computer vision.

“Not being able to use a computer easily is an issue that affects many people globally, and we’re incredibly proud of what our students have achieved, working with colleagues in industry. The software is still in its infancy but the potential it could have is huge. To be able to have that impact is really exciting for us, our partners and our students.”

The potential to change the lives of millions

The UCL MotionInput software was developed initially in response to the COVID-19 pandemic as a way to support NHS frontline staff. Two Computer Science students, Sinead Tattan and Carmen Meinson, headed up the 54 UCL students who worked on developing UCL MotionInput version 3.

“We wanted to help prevent the spread of viruses and other bugs by enabling medical staff to use communal computers without touching their keyboard or mouse. But the applications of what the team has come up with are much further reaching than that,” explained NHS GP, trainer and UCL Honorary Lecturer in Computer Science Dr Atia Rafiq.

UCL MotionInput v3 is unique in that it can be used on most Windows PCs and doesn’t require any equipment other than a webcam and microphone. As most laptops already have these, there are very few barriers to access. It also doesn’t require cloud access and it does all processing on each user’s own device, an important consideration for privacy.

As well as its clinical uses and for those with mobility issues, the software can be used for teaching and presenting, and by people playing computer games.

UCL’s partnerships with global tech firms, including Intel, Microsoft and IBM, meant the team was able to draw on specialist technical expertise to help develop the software.
UCL MotionInput v3 combines the latest open-source machine learning, natural language processing and computer vision software in a way that hasn’t been done before.

For the firms and partners involved, it’s been an opportunity to tap into, and contribute to, globally-significant innovation being shaped at UCL.

Phillippa Chick from Intel said: “We’ve been involved as mentors to the students as they’ve been developing the different modes of use in UCL MotionInput v3. It’s been hugely rewarding to see them progress, and working with partners like UCL and the NHS means we’ve been able to try out new ideas like ‘Facial Navigation’ and ‘Pseudo-VR’ that haven’t been used on PCs and laptops before.”

Making a difference to people’s lives

UCL MotionInput v3 is freely available to download for users. The team hope to see it widely rolled out across NHS sites as well as schools, other industries and user groups, to drive and support the next generation of Equitable Computing access for all.

Former elite gymnast Paris Baker, who won medals for Great Britain at the European and World Championships, was diagnosed with MND at the age of just 26. Now 31 and living with the disease, she said “the potential for UCL MotionInput v3 to change lives is limitless,” after becoming one of the first users of the new technology.

Watch a video about MotionInput