UCL spinout at the forefront of the hydrogen revolution 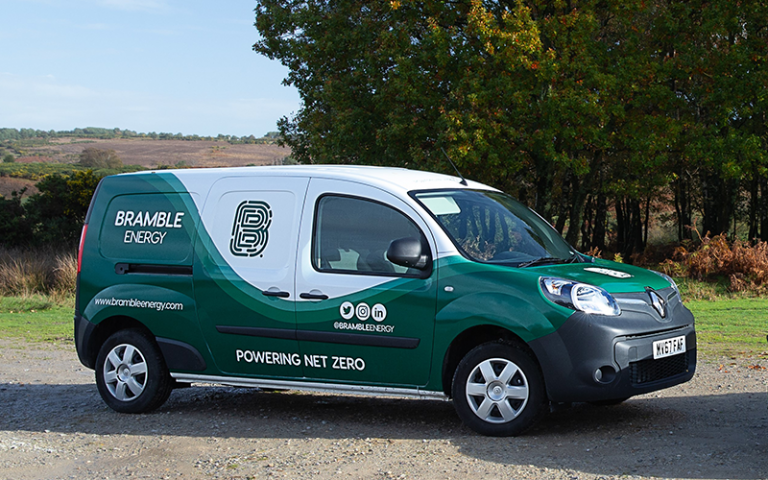 Because Bramble’s technology is inherently scalable, the company is developing a range of solutions. This includes small static fuel cells to replace dirty diesel generators as well as mobile solutions to power road haulage, shipping and aviation.

Having formed in 2016 as a spinout from UCL and Imperial College London, Bramble has since benefited significantly from the UCL innovation ecosystem.

A new dawn for hydrogen

In August 2021, the UK government set out its Hydrogen Strategy, with the ambition to scale-up hydrogen production capacity and infrastructure. The strategy document mentions Bramble Energy as one of a handful of innovative startups operating in the area of advanced fuel cells.

Hydrogen fuel cells generate power from the electrochemical reaction of hydrogen, rather than combustion. This eliminates carbon emissions and produces only water vapour and heat as by-products. However, high manufacturing costs have meant their use has been rather limited.

To address this, Bramble Energy has developed a patent-protected fuel cell that can be manufactured in almost all printed circuit board factories worldwide. This dramatically reduces the time and investment needed to scale up, compared with existing fuel cell designs.

“It’s a big time for hydrogen at the moment and I think everyone now realises that it has an important part to play, even those who have always favoured batteries. Batteries don’t cut the mustard for haulage and freight, in terms of weight and range.”

Five tranches of funding from the Engineering and Physical Science Research Council’s (EPSRC) Impact Acceleration Account, managed by UCL Innovation & Enterprise, have supported various energy-related projects led by UCL. At an early stage of development, this funding enabled Dan and his team to develop a prototype fuel cell. This in turn led to the formation of Bramble Energy.

Scaling up the technology

In August 2020, Bramble raised £5 million of investment in a ‘Series A’ funding round. Investment company BGF led the round and was joined by existing investors including IP Group, Parkwalk Advisors, and the UCL Technology Fund. In six months, they then set up a new 13,500 square foot hydrogen-safe facility from scratch and grew the team to 30. Notably, eight members of the team are former postdoctoral researchers or PhD students from Dan’s lab, including current CEO Dr Tom Mason.

Bramble has recently worked in collaboration with industrial partners in automotive and marine. Bramble launched a project in December 2020 with MAHLE Powertrain to put liquid-cooled fuel cell stacks into vehicles for the first time. The phase 1 demonstrator vehicle was launched at the Cenex Low Carbon Vehicle show in September 2021.

Bramble is also exploring applications in maritime and shipping, working with company SEA-KIT to develop a 12 meter long, ocean-going uncrewed surface vessel (USV). This is through a Clean Maritime Demonstration Competition run by the Department for Transport and InnovateUK.

The company is exploring making ‘green hydrogen’ itself, by using proprietary electrolyser technology. Electrolysis is the process of using electricity to split water into hydrogen and oxygen, which if done with renewable electricity results in a zero-carbon hydrogen economy.

Dan comments: “I think the key thing with hydrogen is that it's about connecting renewables. Where wind and solar energy is generated is often not where people are. You can use existing pipelines to move hydrogen around: it’s a fantastic energy vector, whereas electricity transmission is rather lossy. It's much easier to move chemical fuel around than it is electrons in a wire.”