Results from a field project focused on the impact of heavy vehicles on an Oxfordshire bridge have fed into Highways England’s updating of bridge design guidelines. 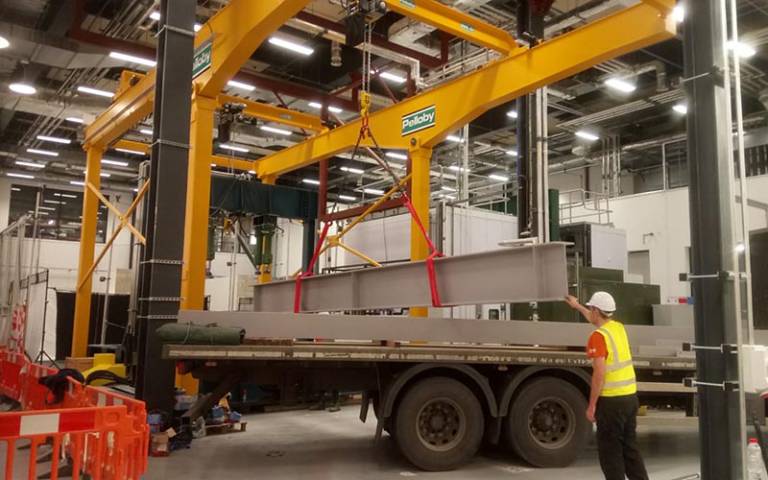 Glass and carbon fibre reinforced polymers (G/CFRPs) are materials which are low-cost and rustproof, with high stiffness and strength. They've transformed the wind turbine, passenger aircraft and high-performance yacht industries.

FRPs also show huge potential to revolutionise road bridge technology. However, to ensure that such bridges can become mainstream, the approaches to their structural design must evolve.

One key design consideration focuses on wheel load fatigue. This refers to the cumulative effects of passing lorry wheels on the structural integrity of the bridge deck over time.

An opportunity arose for Wendel to lead a study into wheel load effects during repair of the West Mill GFRP bridge in Oxfordshire. Constructed in 2002, this was the first all-FRP deck-and-beam bridge in western Europe.

High-speed sensors were installed on the bridge to measure both the wheel loads and the deck’s response to those loads. In parallel, a sophisticated numerical model of the bridge was developed to further elucidate the deck’s mechanics. It was verified by sensor data logged during lorry tests conducted on the bridge at various stages of repair.

Since the bridge was returned to service, the sensors (which continue to perform well) have gathered more data on the effects of fast-moving lorries on the deck. Hence the repaired West Mill bridge is also a unique testbed for underpinning innovation in FRP bridges.

This project’s outputs have been used to update the FRP bridge design guidance document, CD 368, released by Highways England in 2020. Consequently, such decks will be far less prone to progressive damage, with considerable savings on inspection and maintenance bills.

“CD 368 will help keep the UK at the leading edge of FRP bridge design and technology worldwide,” said Wendel. “This will in turn translate into better performing road networks, and so into enhanced economic prosperity and better connectivity between communities.”

Wendel is also feeding the key outputs from this project into a technical specification which is under development by a UK and pan-European committee. He recently hosted a meeting of this committee at UCL.

A scientific paper on this work has been published in the Engineering Structures journal.

The installed sensors continue to perform well, so structural health monitoring of the West Mill bridge will continue.

Wendel has also been invited by Highways Agencies in Europe to implement similar monitoring schemes on their FRP road bridges.