Contributing to the eruption monitoring efforts during an ongoing volcanic emergency is a fascinating yet deeply humbling experience. You have the unique opportunity to observe volcanic phenomena up close and may learn more in a day than you would otherwise learn in a year! 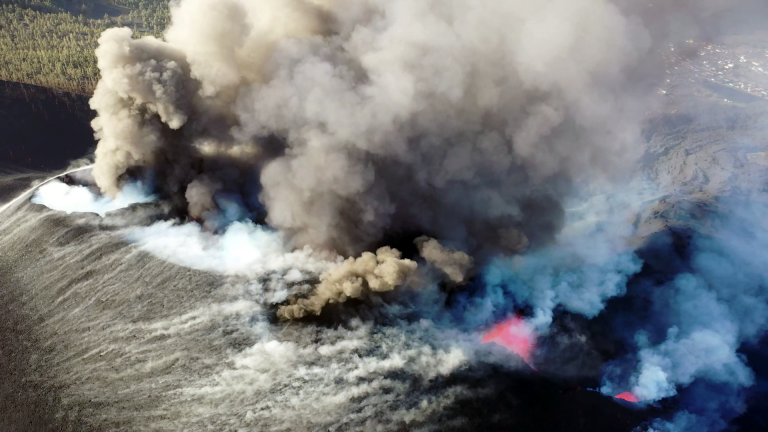 Caption: Multiple aligned vents were active during the Cumbre Vieja eruption, each exhibiting very different eruptive styles (from ash-rich and explosive, to ash-poor and effusive) and characterised by contrasting volcanic gas compositions.

Contributing to the eruption monitoring efforts during an ongoing volcanic emergency is a fascinating yet deeply humbling experience. You have the unique opportunity to observe volcanic phenomena up close (and may learn more in a day than you would otherwise learn in a year!) and yet you are acutely aware of how devasting these events are for the local communities, who will be rebuilding their lives for long after the eruption is over.
A new eruption began at the Cumbre Vieja volcanic system on La Palma on 19 September. To date, lava flows have covered ~10 km2 of land area, destroying almost 3000 homes and displacing ~7500 people. Volcanic ash has been deposited over much of the island of La Palma, causing continuous societal disruption and posing an air quality hazard. I, along with many in the volcanological community, had been tracking the elevated seismicity and ground deformation in monitoring data with concern and was in discussion with INVOLCAN (the local volcanological monitoring institute in the Canary Islands) about how I might contribute to the geochemical monitoring of the emitted volcanic gases, should an eruption occur. Together with colleagues from the University of Palermo and University of Bristol, we arrived in La Palma soon after the eruption began. Caption: Rapid processing of new gas data in the field following a UAS flight into the volcanic plume. We provided daily data reports to INVOLCAN.

Our group’s contribution to the eruption response included aerial measurements of the volcanic gas and aerosol chemistry. For this we used unoccupied aircraft systems (UAS)— or drones—to allow us to sample the gas plume much closer than would be otherwise safely accessible. The intensity of the eruption took many researchers by surprise, with vigorous lava fountaining activity from multiple vents feeding energetic, ash-rich eruption columns up to 5-7 km into the atmosphere. Alongside remote sensing observations conducted by colleagues, we acquired in-situ measurements of plume chemistry using a MultiGAS instrument (both ground-based and flown on a UAS), which analyses concentrations of SO2, CO2 H2S, H2 and H2O in real-time using both electrochemical and spectroscopic sensors. We observed extreme chemical fractionation between closely-spaced volcanic vents displaying contrasting explosive behaviour. From these data, we explore the depth and dynamics of gas exsolution in the shallow magmatic system using thermodynamic solubility models and attempt to constrain the overall volatile budget of the carbon-rich alkaline magmas characteristic of the Canary Islands, alongside petrological observations from erupted lavas. As well as emitted gases, there was concern over the air quality impacts of volcanic trace elements that are emitted as fine aerosol particulates. During the effusive eruption of Kilauea in 2018, I was involved in two studies that demonstrated how volatile metallic elements classified as environmental pollutants (e.g., Cu, Pb, Zn) are released from magmas in large amounts during degassing and can be transported up to hundreds of kilometres from the eruptive source within volcanic plumes (Ilyinskaya et al., 2021; Mason et al., 2021). I was interested in the “fingerprint” of these volcanic metals being emitted from both the high-temperature eruptive vents of Cumbre Vieja and also the ocean entry site, where lava flows were entering the ocean and interacting explosively to produce a plume rich in water and chlorine. I sampled these aerosols using filter packs and cascade impactors, which collect bulk and size-segregated particulates, respectively. I then digested the filter samples in the new metal-free laboratory at UCL and analysis of their trace element compositions is currently in progress.
The eruption lasted for 84 days, making it the longest eruption on La Palma in historical times. At the time of writing, activity has currently paused and only time will tell whether the eruption is truly over or whether magma is continuing to accumulate in the subsurface. For the communities living on La Palma, this end to activity brings the first hope that they may soon begin to rebuild and marks the beginning of a new stage of recovery. For the volcanological community, we have much to learn from this eruption. The breadth of monitoring data collected by so many international teams, all coordinated expertly by INVOLCAN, will provide many opportunities to improve our understanding of magmatic and eruptive processes for years to come.
I wish to thank my colleagues and friends who collaborated with me in this response effort and to INVOLCAN for their warm welcome and unbounded support.