In simple terms, weathering is the break down of rocks to form sediment. 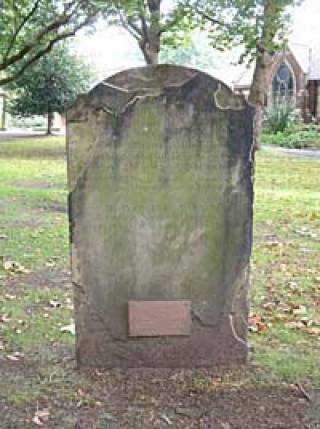 Gravestones provide a useful means of observing and measuring the weathering of different types of rock over relatively long and easily measurable periods of time (100 to 300 years or more).

Within the UK, gravestones are widespread and made of a variety of local and imported natural stones. These gravestones provide information on how such materials behave under different climatic conditions and under different intensities of atmospheric pollution. Using such information may be of use in assessing the relative durability of different types of natural building materials.

The three fundamental types of weathering are:

Weathering of the gravestones in St Pancras Gardens will probably be dominated by chemical weathering brought about by the acute atmospheric pollution of London, particularly in the vicinity of Euston Road where there is a concentration of vehicle exhaust fumes, containing sulphur oxides and nitrogen oxides.

The form of weathering observed on gravestones is a product of four interconnected factors and how they vary both spatially and temporally (i.e., in space and time).

The four factors are:

Forms of weathering produced are dependent upon a combination of factors:

Some Forms, such as flakes on sandstone or surface roughening on marble, may indicate the operation of particular weathering agents such as salts or acid rain. However, these Forms are only visible because they occur on particular Materials which decay in that manner in the presence of those agents.

Often the presence of a weathering agent is taken to imply the operation of a certain Process. The details of these Processes are often unclear or unknown, but in a particular Environment, combinations of Processes are more common than a single, isolated Process. Despite this, weathering rates and decay Forms are often presented as resulting from a particular Process.

Material refers to the substance (natural or artificial) from which a gravestone is made.

Even when identical Materials are in the same Environment, they can react in different ways to the same sets of weathering agents and produce very different weathering forms.

Variations in Material properties on the same gravestone can also produce different Forms and rates of weathering upon that gravestone. Variations in grain size and resistance of minerals in granitic gravestones, for example, can result in the preferential removal of particular mineral grains.

Environment refers to a gravestone’s surroundings.

It will mean different things at different scales:

Location of graveyard: Environment could be urban or rural, coastal or inland for example. This definition, however, can change over time. An area that was once rural or suburban can become incorporated into the polluted urban sprawl, thereby altering the weathering Environment experienced by the gravestone.

Within the graveyard: There may be variations in the exposure of different gravestones depending on the proximity of trees and footpaths or the position of the gravestone on a slope.

Environment can be viewed as the presence or absence of particular weathering agents or the operation of particular Processes, depending on the location of the gravestone.

Processes of weathering are generally associated with particular types of gravestone or particular environments.

Marble, for example, is assumed to decay mainly through dissolution by acidic rainfall (natural rainfall is slightly acidic, being a weak carbonic acid with a pH of 5.6). This removes matrix and grains from the surface of the gravestone leaving a rough 'sugary' feel.

There is an assumption of a one-to-one relationship between Process and Form, i.e. a particular Process will produce a particular Form. However, this is not necessarily the case. Processes never work in isolation from a particular Environment or upon a particular Material.

Flaking of the surface of a sandstone gravestone can produce large and small coherent flakes which become detached.

Often the flake can remain attached to the surface for so long that organisms begin to live in the gap between the flake and the gravestone, possibly causing biological weathering of the surface.

Eventually the flake becomes detached, leaving an uneven surface. Different rates of detachment produce a rough and discoloured surface which can be very friable.

Black crusts can be deposited on sandstone gravestones. These result from the deposition of particulate matter such as soot, but can also form by the reaction of sulfur dioxide and calcium carbonate that may be present.

Carving a surface can produce micro-environments that might enhance weathering.

Lower parts of gravestones can be preferentially weathered, possibly because of capillary rise concentrating moisture in the lower section of the gravestone.

Above: William Jones' grave in St. Pancras Gardens is composed of sandstone and exhibits an uneven surface, a black crust, and preferential weathering at its base.

Limestone is composed of at least 80% calcium carbonate (CaCO3) which is very prone to dissolution by acid rain (weak carbonic acid).

However, it is noticeable how fossils in limestone tend to be more resistant and thus protrude from the stone (below). This is due to their crystalline structure, unlike the surrounding limestone which comprises grains cemented together.

As the fossils would originally have been flush with the surface of the limestone, the amount of protrusion is an indicator of the amount and rate of dissolution that has occurred since the stone was cut.

New Blocks of Portland Limestone in the Walls of St. Pancras Old Church

Some freshly cut Portland Limestone blocks on the sides of St Pancras Old Church show how the fossils in the limestone gravestones would originally have been flush with the surface. 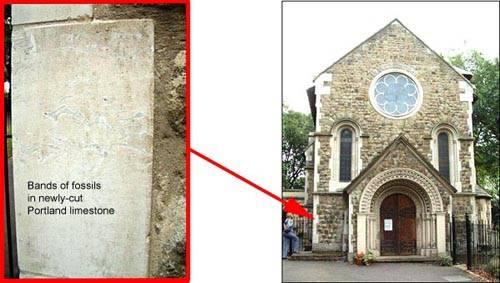 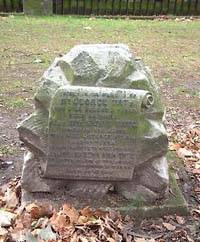 Marble gravestones only a few years old tend to be very smooth, with a pearly lustre. After ten or twenty years, however, these gravestones lose their lustre and become quite gritty.

If you stroke the white surfaces of the marble, you feel the fine grains that will detach themselves without difficulty. These are not the rounded grains that you should see in a sandstone, but slightly hollow-faced crystals that most closely resemble sugar grains.

What happens when granite is weathered?

The table below gives an initial classification scheme that might be of use. It should be noted, however, that often weathering forms appear in combination and trying to classify a surface as being of one particular form neglects the interactions and relationships between forms.

Leaded Lettering as an Indicator of Gravestone Weathering

The amount of material removed from gravestones by weathering is often measured using a reference called the Lead Lettering Index (LLI). This index assumes that the lead lettering inserted into gravestones was originally polished flush to the surface. Over time the stone has been eroded and left the lead lettering standing proud. It is assumed that the lettering has not been eroded to any significant degree itself.

Assuming a relatively uniform rate of erosion across the whole gravestone, measuring the height difference between the lead lettering and the stone surface indicates how much material has been removed since the gravestone was exposed. Repeated measurements across the gravestone should then provide a representative sample of height change. If the same letters are selected, for example the '1' in the date or the 'I' in died, then comparisons are possible between gravestones keeping the letter location approximately constant.

The John Walker Memorial and the base of the memorial, with lead lettering showing.

When this limestone was fresh, the lead lettering would have been flush with the surface. However, over the 127 years since it was first exposed (1877), the limestone has weathered away, leaving the lettering standing proud.

Where is the John Walker Memorial?

On closer inspection it is easy to see the that the lead lettering is raised above the surface of the limestone memorial: 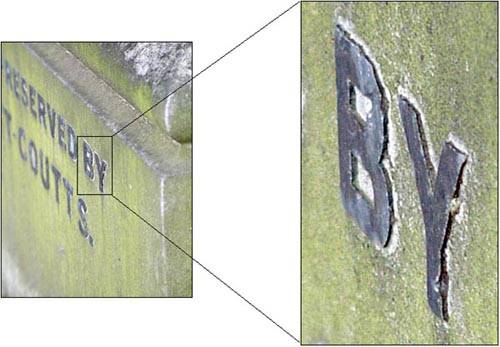 This marble gravestone has lead lettering similar to that of the John Walker Memorial. The two thus provide a useful direct comparison of weathering rates between different lithologies. The image on the right shows a close-up of the raised lettering on the surface of the grave stone.

Where is the Tate Family Grave? 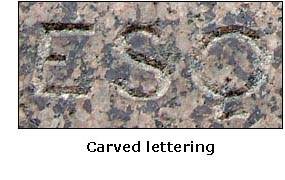 It has been suggested that the alteration of carved lettering on gravestones follows a sequence of deterioration. The lettering becomes progressively roughened and difficult to read. The edges of the carved surface at first become less distinct as granular disintegration occurs. The whole letter begins to merge into the surface of the gravestone as it is removed by erosion. Eventually the lettering becomes almost indistinguishable from the surface of the gravestone itself. Once the lettering is indistinguishable the method becomes inappropriate to use.

Although this method can not provide any absolute measurements of the amount of material lost, it can provide a relative measure of deterioration, i.e. it is qualitative rather than quantitative.

Above, carved lettering on the Jane Grundy Memorial

Because granite is so resistant to erosion, this carved lettering, now about 170 years old, is still very clear and has lost little of its original definition.

Where is the Jane Grundy Memorial?

On William Jones' sandstone grave, the lettering becomes progressively less defined towards the bottom of the stone due to the preferential weathering resulting from concentrated moisture in the lower part of the gravestone.

Where is William Jones' Grave? 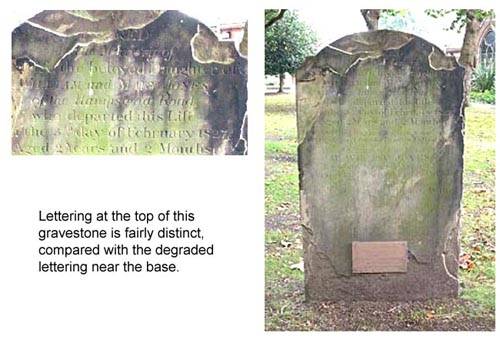 On this Portland Limestone grave, the lettering has been weathered to such an extent that the inscription on the stone is barely legible.

However, this could be partly due to the black layer that has accumulated on the surface of the stone.

Where is the Flaxman Family Vault? 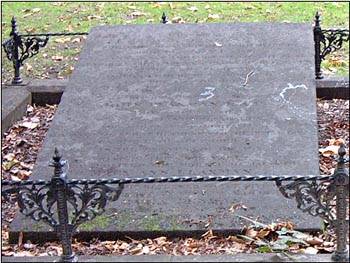