The Transcriptomic and Biophysical Basis of Mechanosensory Submodality: A Drosophila Model Organ Study

Mechanosensory organs directly couple the mechanical energy of a stimulus to the open-state of an ion channel in the membrane of a mechanosensory cell. This process, known as mechanotransduction, lies at the heart of all mechanosensation. Conceptually, it is clear that the specific nature of this coupling will distinguish, and define, the various mechanosensory submodalities (such as sound, touch, balance, wind, pain, gravity or proprioception). But the concept is misleading in its clarity. It hides the fact that it is unclear how that coupling should differ between, say, a proprioceptive and tactile hair on a spider leg, a vestibular hair cell, or an auditory hair cell in the vertebrate cochlea. Adding darkness to short sight, the molecular identities of the actual transducer channels are still unknown for all of the above given examples. But even if we did know all the respective requirements, we would still not know how these are implemented molecularly for submodality-specific mechanotransduction, to occur.

One of the most amenable mechanosensory model organs, the Drosophila Johnston Organ (JO), sits in the 2nd antennal segment and harbours discrete populations of mechanosensory neurons which have been linked to the submodalities of wind/gravity and sound. However, all neurons attach to the same receiver structure, the third antennal segment. Large parts of the submodality-specific adaptations thus have to be implemented downstream of the receiver on the level of the respective cellular and molecular components. We intend to carry out a comprehensive molecular, and functional, dissection of modality-specific mechanotransduction in JO.

We will first profile the specific mRNA transcriptomes, (i.e. the complete sets of produced mRNAs) for different types of neuronal and non-neuronal cells. Such cell-type-specific transcriptomic analyses will unveil the molecular (and cellular) divisions of labour in JO and help identify the distinct roles of individual genes for subset-specific mechanotransduction and mechanosensory behaviours. Our behavioural analyses will use novel tools that we have specifically devised for this project. Combining molecular and biophysical analyses (laser vibrometry, extracellular and intracellular recordings) with predictive computational tools, this project will put particular emphasis on the identification of modality-specific differences in higher order regulatory genes, such as specific transcription factors. The identification of modality-specific transcription factors is expected to enable the identification of distinct modules of sensory transduction, which act as functional units within mechanosensory cells of different modalities.

Understanding how the underlying transcriptional pathways, which can be expected to be conserved across the animal kingdom, are being recombined during the process of evolution to create sensory systems of various modalities and submodalities will be of great value for better understanding of the myriad of human disease syndromes such as Usher syndrome Type IIA + IIIA or Bardet-Biedl syndrome, which simultaneously affect multiple sensory systems. Eventually, this research into the molecular and mechanistic fundaments of sensory modality will lead the way towards new therapeutic avenues.

Homeostatic maintenance of the auditory system and its relation to age-dependent hearing loss: A Drosophila model organ study

In the UK, some 70% of people over 70 suffer from decline of hearing. Yet, we have acquiesced into this age-related decay of our senses almost as tacitly as we take their faultless operation for granted for most of our lives. Scientifically, both of these phenomena are equally remarkable. Our eyes and ears are parts of the living world and as such they are in constant need of metabolic energy and permanently exposed to countless environmental challenges. In contrast to a granite rock, a biological system that retains constant properties over periods of days, months, or even years, needs an explanation. If then at some point, and without any obvious external cause, system performance eventually declines, a second explanation is required. This research project will study both of these phenomena and test the hypothesis that they are mechanistically interlinked. In other words, what are the cellular mechanisms that maintain our sense of hearing and how do these mechanisms deteriorate over time? Using the antennal ears of the fruit fly Drosophila melanogaster as a model sensory organ, we will (i) dissect the molecular network that maintains sensitive hearing throughout the fly's life course and (ii) study how this maintenance, or homeostasis, changes during ageing. We will specifically test the hypothesis that the same molecular networks that direct the construction of the ear in the growing fly (about which we already know quite a lot) also contribute to its homeostatic control during adult life (about which we know very little). Importantly, the molecular networks of ear construction are known to have much in common between flies and humans, and we expect our research will provide a relevant model to understand decline of hearing in humans.

All forms of life adjust themselves to the daily rhythms of their environments using endogenous oscillators collectively referred to as circadian clocks. Peripheral and central body clocks exist, which both require extrinsic information (e.g. light or temperature changes) to keep in sync with the geophysical cycle (entrainment). In addition, intrinsic cues (e.g. activity levels) have been linked to clock entrainment. Recently, we could show that activation of proprioceptors is sufficient to entrain the central clock of the fruit fly Drosophila melanogaster. Proprioceptors are mechanosensors that monitor the positions, and relative movements, of an animal’s own body parts. The existence of proprioceptive entrainment pathways has significant implications; it implies that an animal’s ‘clock time’ is computed by integrating, and weighting, various external and internal conditions, suggesting the existence of external and internal time.

Using Drosophila, I will investigate the relationship between mechanosensory and circadian systems in a dual, and bidirectional, approach. The project’s first aim is to dissect the neurobiological bases of proprioceptive clock entrainment (i) identifying the specific stimulus requirements for effective entrainment, (ii) determining its mechanosensory pathways and, in a combined computational and experimental strategy, (iii) quantifying the precise contributions of an animal’s activity to its sense of time. The project’s second aim, in turn, is to unravel the roles of the clock, and clock genes, for the function of mechanosensory systems. Previous studies have linked the clock to noise vulnerability in mammalian ears, and clock genes to regeneration in avian ears. Our own preliminary data reveal severe mechanosensory defects in flies mutant for core clock genes. I will use the Drosophila ear as a unifying model to analyse the specific roles of the clock, and clock genes, for the function of mechanotransducer systems.

At the heart of all sensation lies a common process: The opening or closing (called the gating) of dedicated ion channels in the membranes of sensory cells. These so-called sensory transducer channels convert external stimulus energy- such as the mechanical energy contained in a sound wave- into an electrical current that flows through the sensory cell's membrane. In the case of the classical mechanical senses, i.e. the senses of touch, hearing and balance, these mechano-transducer channels are deemed to be gated in the most direct way possible, namely by the stimulus forces themselves. This direct mode of activation implies that the transducers must somehow be mechanically coupled to specialized stimulus receiver structures, such as our ear drums or the antennal sound receivers of fruit flies, for example. Somewhat ironically, however, the astonishing simplicity of their mode of activation appears to have greatly complicated the molecular identification of true mechano-transducer channels to this day. Recently, it was demonstrated that mechano-transduction in the sensory cells of the fruit-fly (Drosophila) ear, relies on mechano-transducer channels that operate according to the same biophysical principles as those in the inner ears of vertebrates. Fortunately, in Drosophila, the function of these transducer channels can be assessed in vivo, in the ears of intact flies. Given the enormous genetic tractability of the fruit fly, along with the availability of a multitude of mechano-sensory mutants, the Drosophila ear therefore constitutes an ideal system in which to probe the specific roles of identified proteins in the process of mechano-sensation, particularly their contributions to mechano-transduction. This proposal will initiate the molecular dissection of mechano-transducer function in the Drosophila ear by specifically assessing the role of an ion channel called NompC. The NompC channel, which reportedly serves mechanosensory functions in the ears of both vertebrates and invertebrates, is presently the best candidate for a true, auditory mechano-transducer channel. A common feature of mechano-transducers in the ears of both fruit flies and vertebrates seems to be their ability to adapt to a maintained stimulus: in vertebrate hair cells this adaptation is mediated by specialized adaptation motors which act to release tension from those elements that couple forces to the transducer channels, thus allowing for the channels to close despite the presence of the stimulus. Most remarkably, the adaptation of transducer channels in the Drosophila ear appears to operate in the same way as in vertebrates. Several lines of evidence have suggested an involvement of NompC in the process of mechano-transduction or mechano-transducer adaptation in Drosophila but more direct evidence remains outstanding. By using biophysical, transgenetic and modelling approaches, I will investigate the specific contribution of NompC to mechano-transduction and/or adaptation in the Drosophila ear. Despite the fact that the NompC channel, though present in the ears of non-mammalian vertebrates, seems to be absent from the ears of mammals, the study proposed here will also provide for a better understanding of our own ears' workings. Studies in non-mammalian vertebrates, such as turtles and frogs have provided much insight into fundamental mechanisms of auditory function that also apply in mammals, This study in the fruit fly is likewise expected to make a significant contribution to our molecular understanding of how ears translate the mechanical forces provided by sound into electrical signals which can be processed further on in the brain.

From genes to circuits: the evolution of species-specific communication in Drosophila

All phenomena of the living world shape, and are shaped by, the process of evolution. In perhaps no other area of biology this fundamental duality becomes as evident as in the complex communication systems that mediate mate recognition in the animal kingdom. Both neurobiologically and evolutionarily, the task of recognizing a potential mate for reproduction is truly a multiple-task including the fundamental challenge of sex and species recognition as well as the more sophisticated exercise of taxing the potential mate’s fitness, i.e. its likely reproductive value. Unsurprisingly thus, when it comes to their mating decisions animals usually rely on signals from multiple sensory information channels. One sensory system that is frequently involved in the mating negotiations of both vertebrates and invertebrates is the sense of hearing: From marine mammals to air-borne mosquitoes, acoustic courtship rituals have evolved that include the generation, reception and subsequent analysis of species-specific sound signals. A prominent example is the acoustic courtship of flies of the genus Drosophila. As part of their mating ritual, male flies sing a ‘love song’ to their females. These songs differ across fly species and are deemed to contribute to both species isolation and speciation in Drosophilid flies. We here attempt to elucidate the evolutionary, material and mechanistic bases of species-recognition in the Drosophila acoustic communication system. Applying state-of-the art techniques in biophysics, bioinformatics, genetics, bioengineering, neuroanatomy, behavioural analysis, and in vivo electrophysiology, across the 12 recently sequenced Drosophila species, we will explicitly probe for species-specific mechanisms underlying the emission, reception, and processing of sound in the fly. Our project represents an unprecedented multi-level approach, not only to acoustic courtship in Drosophila, but to animal communication, molecular evolution and speciation in general. 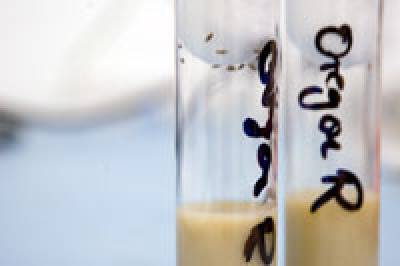