The term Posterior Cortical Atrophy (PCA) literally means back ('posterior') of the brain ('cortical') shrinkage ('atrophy'). In people with PCA, there is loss and dysfunction of the cells at the back of the brain, particularly in areas called the occipital, parietal and temporo-occipital regions.

PCA is most commonly caused by Alzheimer's disease (AD). However, the brain scans of people with PCA and typical AD (characterised by prominent memory loss and confusion) can look very different. Examples of the magnetic resonance imaging (MRI) brain scans of a healthy individual, someone with typical AD, and someone with PCA are shown in Figure 1. These images all show a side profile, as though the person were looking to the left. Healthy individuals have tightly packed brain tissue (grey) with only very small spaces between folds (black). People with typical AD have a general loss of brain volume with particular loss of a structure called the hippocampus which is important for memory (red arrow). By contract, people with PCA have particular loss of volume in the occipital and parietal lobes which are important for perception and literacy (blue arrow). 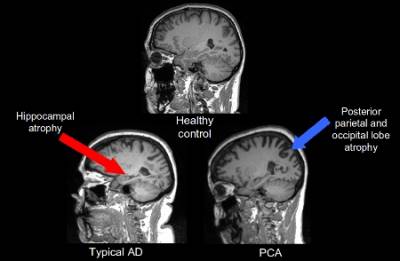 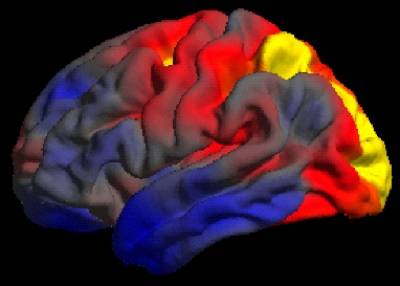 As with typical Alzheimer's disease, PCA is a progressive condition. This progression can be observed in the following video clip, which shows the loss of brain tissue in one individual with PCA over the course of 58 months (see Video 1). Watch the video a few times focussing on the front of the brain (on the right) where there is little change. Then watch the video a few more times focussing on the back of the brain (on the left). The greater loss of brain tissue at the back of the brain, typical in people with PCA, is clear to see.