UCL's Digitisation Suite is a facility for teaching and research, coordinated by UCLDH. It hosts a range of cameras, scanners and other equipment. It is co-located with UCL Special Collections, one of the foremost university collections of manuscripts, archives and rare books in the UK. We have worked together on a number of projects, testing new advanced imaging techniques on real historical objects and using imaging to answer questions posed by librarians and conservators in Special Collections. 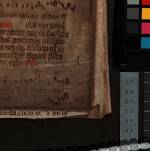 This sheet of medieval music unexpectedly turned out to have been written over another piece of music that was revealed in one of the first tests of our new multispectral imaging system.

The text of the music that appeared under multispectral illumination has been tentatively identified as "Libera Me", a Catholic prayer. 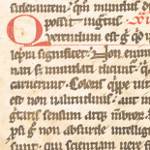 UCL acquired a collection of 157 fragments of medieval manuscripts, collected in the early 20th century by Prof Robert Priebsch to be used to teach palaeography. They include examples of musical, religious and legal works mainly from the 10th-14th centuries in different European languages. Many were used as book bindings and have suffered a range of different types of damage. We obtained funding to fund a researcher to examine the collection and carry out some initial imaging studies. The work was presented at the Digital Humanities 2015 conference. 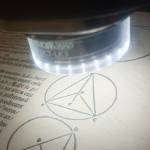 Euclid's Elements was a maths textbook that defined mathematics for 2000 years. Early printers didn't have the technical ability to print mathematical diagrams until Erhardt Ratdolt worked out a method and published the first printed edition in 1482. Special Collections have a copy and were keen to find out whether imaging the depressions in the surface of the paper would give any clues as to how Ratdolt solved the problem. We chose to use optical coherence tomography, an imaging technique more usually used to image the retina.

Book that opens to show an abacus 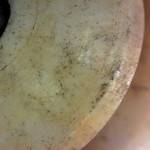 This 18th century French book opens to reveal an abacus that is made up of beads on metal wires.

We used a microscope to examine the beads to find out what they were made of, and used photogrammetry to generate an interactive 3D model of the book.

Hyperspectral imaging of a genealogical roll 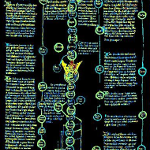 Special collections holds a 6 m long genealogical roll (Ms. Angl. 3) that traces the ancestry of Edward IV back to Adam and Eve. Charlie Willard, a SEAHA PhD student, imaged this using a hyperspectral imaging camera that he mounted on a frame that he build. He presented the work at a Gordon Conference in 2018. Andreas Vesalius was a 16th century anatomist who wrote  De humani corporis fabrica (On the fabric of the human body).

Its remarkable illustrations include some pages with pop-up figures with instructions to the owner explaining how to assemble them. We used a laparoscope, intended for foetal surgery, to image underneath these pop-ups.

Multispectral Imaging of a Botanical and Zoological Compendium 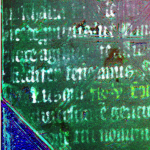 Cerys Jones, a SEAHA PhD student, used multispectral imaging to recover text on the binding of a 17th century book called Exoticorum libri decem (or ‘Ten books of exotic life forms’) and discovered writing that was illegible to the naked eye.

Looking for DH Jobs in London 2022

My postgraduate digital humanities students are working away diligently on their dissertations, but understandably they’ve also got one eye on what might come next. For most of them, that means a transition into the world of work.

The UCL Centre for Digital Humanities (UCLDH) was founded in 2010 as a cross-faculty research centre that brings together a vibrant network of people who teach and research digital humanities in a wide range of disciplines, in the heart of London.

Join us 5-6:30pm Thursday (19 May 2022) via Zoom for our very own Professor Tim Williams (Archaeology), for the next Digital Humanities Longview seminar, which explores digital scholarship and the Silk Road. Professor Williams’ research considers urban archaeology, especially in Roman, Islamic, and Central Asian contexts. He’s the Director of a long-running research project at Merv, Turkmenistan, which has been operating since 2001.

The VISion for Art (VISART) workshop is an interdisciplinary workshop held with the European Conference on Computer Vision (ECCV) on a bi-annual basis. The workshop is now on its 6th edition and has had great success over ten years since starting in Florence (2012), with the 2022 edition in Tel Aviv, Israel. The success has led to VISART becoming a staple venue for Computer Vision and Digital Art History & Humanities researchers alike.

Extending the history of digital humanities by 510 million years

UCLDH was fortunate to be awarded funds through UKRI’s Research Capital Investment Fund in 2019 in a bid led by our previous director Prof Simon Mahony. The bid funded the purchase of a Bruker Tornado M4+ x-ray fluorescence scanner. This is a unique system that uses x-rays to excite the atoms making up a substance which then emit x-rays that are characteristic of the elements making up the sample. The beam is narrow and scans across an object, allowing an image to be built up of the elemental composition.

An article co-authored by UCLDH team member, Prof Julianne Nyhan and co-author, Dr Alexandra Ortolja-Baird, has been nominated for a Digital Humanities award.

We are very pleased to announce the programme for the 2022 Digital Humanities Longview (virtual) seminar series, co-hosted with our friends at CESTA (Stanford, US) and the Centre for Digital Humanities (Uppsala, Sweden). In this our second year of the series, our focus is on the idea that technology is global, but where we live affects how we apply digital solutions to humanities work. We all have what Roopika Risam described as a digital humanities (DH) “accent”. This seminar series explores those accents by looking at DH research here, and there, and over there too.

UCL Dept of Information Studies are seeking an innovative researcher and experienced lecturer to appoint to a full-time post beginning in March 2022.

They are particularly interested in applicants with demonstrable experience and expertise in cross disciplinary research which intersects with one or more of the broad areas represented in the Department, which includes Digital Humanities.

At the end of this year Prof Julianne Nyhan will be stepping down as UCLDH Director to focus on her new AHRC-funded project, The Sloane Lab: Looking back to build future shared collections. Our Deputy Director, Prof Tim Weyrich also stepped down earlier this year as he became Professor of Digital Reality at Friedrich-Alexander University Erlangen-Nürnberg (FAU).