What's more gripping, video or audiobooks? UCL and Audible team up to find out 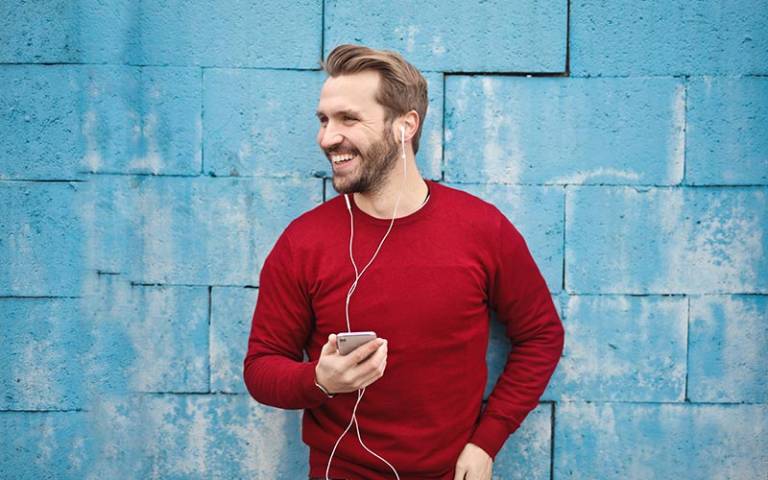 Joe Devlin, Head of Experimental Psychology and Vice-Dean (Enterprise) at UCL and UCLC teamed up with Audible to help them discover more about their listeners, and found out something ground-breaking.

Audible, the largest producer of digital books, approached UCL Consultants (UCLC) to find out what happens in people's brains when they listen to audio books. How does listening to a story being told versus watching it on screen influence your emotional engagement?

Bjorn Christianson at UCLC introduced Audible to Dr Joe Devlin and his team in the Department of Experimental Psychology.  And the story unfolded from there.

Joe's team ran experiments with over 100 volunteers across a big demographic, measuring their physiological responses when either listening to or watching a particularly dramatic scene from one of eight bestselling and blockbuster stories: A Game of Thrones, The Girl on the Train, Pride and Prejudice, The Silence of the Lambs, Great Expectations, The Da Vinci Code, The Hound of the Baskervilles, and Alien.

Each person saw four video clips and four audio clips, listening to all eight stories. But no one person had the same story twice. While the participants watched and listened, the team measured the participant's physiological responses - their heart rate, their emotional arousal, and their body temperature.

The first set of data was really clear - videos win.

The behavioural data analysis for video was ambiguously much stronger. When asked about their experience of these clips the participants said they felt they paid more attention, engaged with the character more and felt more in the story with the videos than the auditory.

But looking at the physiological data, the team found a startling result - the participant's physical reactions were completely the opposite to what they thought they were experiencing.

Like when you're reading a book, when listening to an audio book your imagination works to create the images, voices and special effects. When you're watching a film, all that's done for you. As a result you're working harder when reading and listening, which in turn leads to a greater emotional engagement.

When listening to the audio, participants' heart rate was higher, they had a stronger galvanic skin response, and their body temperature rose.  All three of these are indications that they're doing more work. And as a part of doing more work, the participants were engaging more deeply.

On average, the participants' heart rate went up by two beats a minute when listening to the audio. This doesn't seem like much, but it was remarkably consistent and didn't vary by age or gender, so the chance of an error was less than 1 in 100,000.

The grand finale (with hints of a sequel and spinoffs)

The success of this project has led to an ongoing relationship with Audible. There have been talks of a number of spin-off projects, like research around the difference between listening to stories through different channels in relation to empathy.

Don Katz, Audible founder and CEO, said: "Audible was founded because we believe deeply in the impact that powerful listening experiences can have on hearts and minds.

"This first phase of UCL research confirms what millions of Audible listeners already know - the spoken word enthrals, entertains, inspires and, most importantly, moves us like nothing else."

The story went to press on 21 June 2018, and the findings from the study can be found on bioRxiv. The research will be submitted to a peer reviewed journal in the next few months.

" "Trying to bridge some of those gaps between academics and industry is super exciting. The first step is recognising those gaps, and the second is being able to speak a common enough language set that you can communicate effectively in these areas. And that's where the people in UCL Innovation & Enterprise are invaluable.

" "Bjorn Christianson at UCLC has been instrumental throughout the whole process. Breaking down what we can offer before we even started, helping mediate, and understanding both the science side and the business side - that's immensely helpful."

Watch a film of Joe discussing his research