The current House of Lords appointments system lacks public support, with demand for better regulated appointments and an upper limit on the size of the chamber, according to new research by UCL’s Constitution Unit. 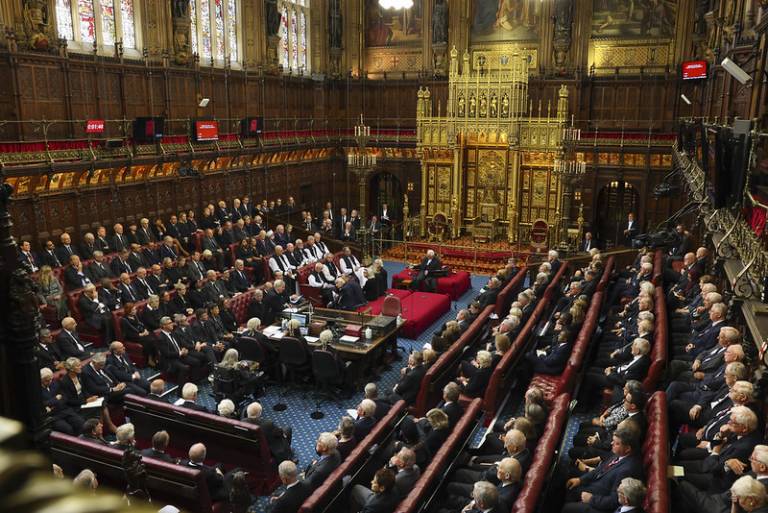 The current House of Lords appointments system lacks public support, with demand for better regulated appointments and an upper limit on the size of the chamber, according to new research by UCL’s Constitution Unit.

Released today, the findings come from a survey carried out for the Democracy in the UK after Brexit project, in which over 2000 members of the public were asked a trio of questions about their views on the House of Lords.

The public strongly supports an independent body, rather than the Prime Minister, making appointments to the Lords

The survey asked respondents to choose between three options on how members are appointed. Only 6% supported the current system, whereby the Prime Minister appoints new members to the House of Lords. In contrast, 58% supported an independent body appointing new members (including 54% of those who voted Conservative in 2019). An additional 17% indicated that they agreed equally with both proposals, while 19% selected ‘Don’t know’. Excluding those who answered ‘Don’t know’, just 7% supported the current system, while 72% supported change (21% supported both equally).

The UCL survey revealed that only 3% of respondents supported the current lack of size limits of the House of Lords, which is the largest second chamber in the world, at around 800 members. Instead, 65% believed that the number of members in the Lords should be no greater than the 650 MPs in the House of Commons (rising to 77% among 2019 Conservative voters). A further 9% of the overall sample agreed with both statements equally, while 23% responded ‘Don’t know’. Excluding ‘Don’t knows’, just 4% supported the status quo, against 84% who wanted change (11% agreed with both equally).

However, the results did not show strong support for moving towards a system of elected members in the Lords – with a roughly equal number of respondents supporting elected members as appointed. According to the survey, 29% of respondents agreed that the chamber ‘should include elected members to ensure that it is democratically accountable to the people’, while 28% agreed that the Lords ‘should include appointed members to ensure that it contains experts and people independent of political parties’. Meanwhile 26% agreed or disagreed with both statements equally, and 18% responded ‘Don’t know’. Opinion was relatively evenly split across the respondents, regardless of how they voted in the 2019 general election.

These last results strongly echo a 2006 survey for the Times (PDF) , which found that 72% agreed that ‘at least half of the members of the House of Lords should be elected so that the upper chamber of parliament has democratic legitimacy’, but 75% of the same respondents agreed that ‘the House of Lords should remain a largely appointed house because this gives it a degree of independence from electoral politics and allows people with a broad range of experience and expertise to be involved in the lawmaking process’. Sixteen years later, the public remains equally divided about large-scale Lords reform.

Professor Meg Russell, Director of UCL Constitution Unit, said: “These new survey results are particularly striking in the context of speculation about Boris Johnson’s anticipated final appointments to the Lords. They clearly demonstrate public rejection of the system of prime ministerial patronage to the Lords, and the chamber’s growing size.

“The public want a more clearly regulated system, involving an independent appointments commission and a clear cap on the size of the Lords. But this does not necessarily mean rejecting appointments altogether. In the short term, politicians should urgently focus on cleaning up the present system.”

The Democracy in the UK after Brexit project is funded by the Economic and Social Research Council, and led by Professor Alan Renwick.

YouGov interviewed 4,105 respondents between 26 August and 5 September 2022 as part of the second population survey of the Democracy in the UK after Brexit project. Half of the sample received these three questions, each of which was framed by asking ‘Which comes closest to your view?’. The survey closed just before Liz Truss was announced as the new leader of the Conservative Party.

The full report on the results of this survey, among the most detailed of its kind conducted in the UK, will be published later in 2022. The survey investigated public attitudes on a range of issues including the role of democratic institutions, standards in public life and the state of democracy. More details about the survey can be found here.