Monitor 82: Achieving a new normal for the constitution?

The latest issue of the Constitution Unit’s newsletter on constitutional developments is out now and available for free download. 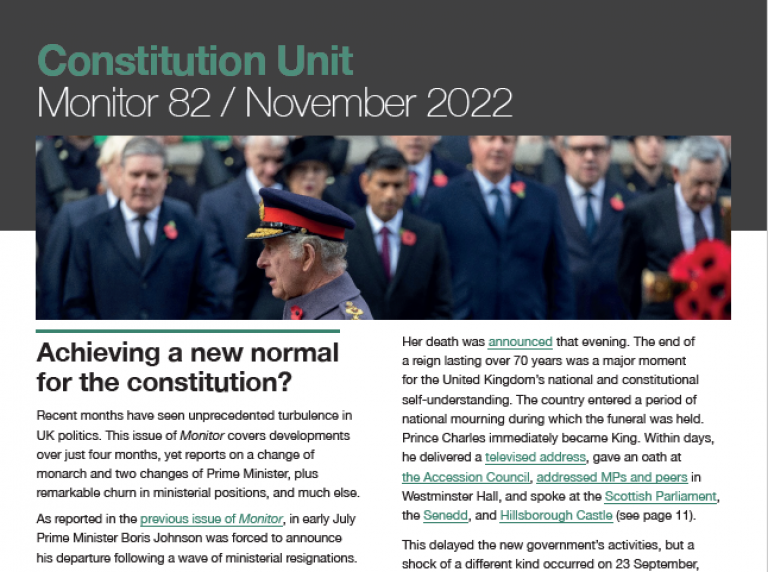 The new issue of the Constitution Unit’s Monitor is available now. Published three times a year, Monitor provides a unique round-up of constitutional developments in the UK over the preceding months.

This issue catalogues just four months of developments – but covers a change of monarch, two new Prime Ministers and remarkable ministerial churn, among much else.

This issue details a tumultuous period following the fall of Boris Johnson. Johnson was brought down by a wave of ministerial resignations prompted by concerns about propriety and ethics. Yet these themes played little role in the subsequent leadership election. The period of public grieving following the sad death of Queen Elizabeth delayed the early activities of Liz Truss’s government, but the announcement of Chancellor Kwasi Kwarteng’s ambitious ‘mini-budget’ caused a shock of a different kind. The grave financial instability caused by the fiscal statement highlighted the risks of evading expert advice and independent scrutiny. Truss sacked Kwarteng, but was herself forced to resign just nine days later.

Rishi Sunak promised when he took over as Prime Minister to restore ‘integrity, professionalism and accountability’. However, he has been beset by challenges over ministerial ethics in light of allegations of ministerial misconduct – and must also deal with the longer-term legacies of his predecessors, including:

All of these issues are discussed in this edition of Monitor, along with:

Beyond Westminster, meanwhile, as Monitor went to press the Supreme Court found that the Scottish Parliament lacks the competence to legislate for an independence referendum on reserved competence grounds. The Scottish government continues to make the case for independence. Northern Ireland still lacks a functioning Assembly. And the Independent Commission on the Constitutional Future of Wales continues to gather expert evidence.

This edition also reports on the publication of a new book on the prerogative co-authored by Unit Founder Robert Hazell, two new reports on the monarchy, and new briefings under the Unit’s project on Constitutional Standards and the Health of Democracy.

As with all issues of Monitor, this includes a handy list of key ‘people on the move’ in the constitutional field, and all Constitution Unit publications and media appearances.

This edition of Monitor, along with all previous editions, is available to download free from our publications page.