The Constitution Unit publishes a new report setting out the findings of a major survey of public attitudes to democracy in the UK. 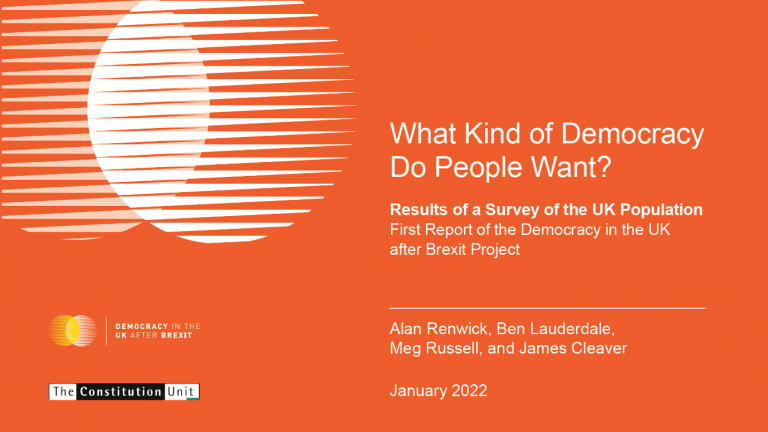 The Unit has published a new report – What Kind of Democracy Do People Want? – setting out the findings of a uniquely detailed survey of public attitudes to democracy in the UK. The survey was conducted in July 2021, with a sample of almost 6,500 people, representative of the voting-age population across the whole of the UK.

The report has two core findings. First, the UK public want politicians who are honest, have integrity, and operate within the rules. Second, they are wary of concentrating power too much in the hands of government ministers, but rather want power shared with parliament, judges, civil servants, regulators, and the public.

When asked to ‘imagine that a future Prime Minister has to choose between acting honestly and delivering the policy that most people want’, 71% chose honesty and only 16% delivery. When asked about a range of characteristics that politicians should have, ‘being honest’ came top, followed by ‘owning up when they make mistakes’. ‘Getting things done’ and ‘being inspiring’ were far behind.

One example of people’s desire for power not to be unduly concentrated in the hands of the executive is their view of the role of judges. We asked respondents to ‘imagine there is a dispute over whether the government has the legal authority to decide a particular matter on its own or whether it needs parliament’s approval’, and to consider how the dIspute should be settled. More than half (51%) said it should be settled by judges, against only 27% choosing government ministers or politicians in parliament.

The survey also asked about whether judges should play a role in resolving whether a new law violates rights. Depending on the rights that were asked about, between 65% and 77% of respondents said that the courts should have their current powers under the Human Rights Act or stronger powers to strike down laws directly.

A large majority (60%) also said that civil servants should be ‘neutral and permanent government employees’ rather than ‘appointed by the government of the day’ (on 13%). And most respondents said that someone who had previously said the BBC should be neutral in its reporting could be a suitable candidate for BBC Chair.

The survey was conducted in summer 2021, when support for the Conservative government led by Boris Johnson remained high. Since then, the government has been hit by rows about parliamentary standards, MPs’ second jobs, and claims about breaches of the Covid rules. However, even last summer, a strong public appetite for greater integrity in politics was evident.

“It’s often said that people aren’t interested in political processes – they just want government to deliver. It’s true that few people pay much attention to the fine details of democratic institutions. But people do want a system in which politicians act with integrity and where power isn’t unduly concentrated with ministers in government.

“Most people, across different political affiliations, think that’s not the case at present.”

“The results of this survey and a recent Citizens’ Assembly on Democracy in the UK show that concerns about standards in public life have really cut through. Across all parts of society, and across political allegiances, people are angry and frustrated and want their elected representatives to do better.”

The survey and the Citizens’ Assembly on Democracy in the UK – whose initial findings were recently released – form part of a wider research project. Called Democracy in the UK after Brexit, it is led by Professor Alan Renwick, with Professors Meg Russell and Ben Lauderdale. You can view members of its Advisory Board on the project webpage. The project is funded by the Economic and Social Research Council (ESRC) as part of its Governance after Brexit research programme. There will be a further follow-up survey of the UK population in spring 2022.