Alan Renwick gives evidence on the conduct of referendums

Alan Renwick gave evidence last week to the House of Commons Public Administration and Constitutional Affairs Committee, on the role of the Electoral Commission in referendums. 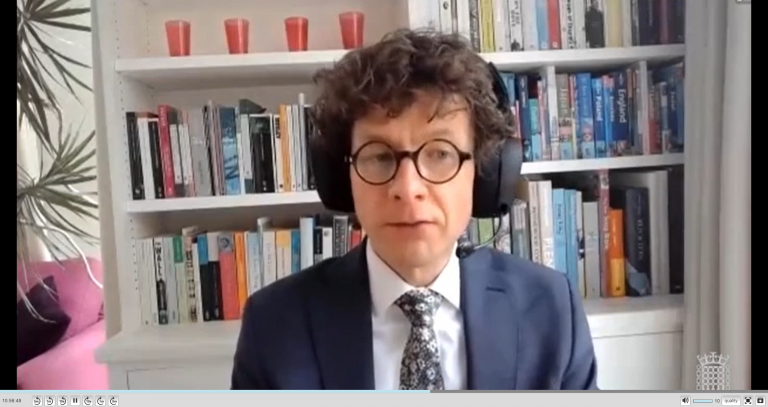 Dr Alan Renwick, the Unit’s Deputy Director, appeared before a parliamentary select committee last week to provide evidence on the role played by the Electoral Commission in the conduct of referendums. The session was part of an inquiry into the work of the Electoral Commission being conducted by the House of Commons Public Administration and Constitutional Affairs Committee (PACAC). Dr Renwick spoke in his capacity as Research Director for the Unit’s Independent Commission on Referendums (ICR), which reported in 2018. Also appearing as witnesses were two members of the ICR: the former Conservative MP Dominic Grieve; and former Labour MP and Vote Leave Chair Baroness (Gisela) Stuart.

Echoing comments by Mr Grieve and Baroness Stuart, Dr Renwick argued that the ICR’s recommendations stood up well after three further years. He particularly highlighted the need for greater transparency in campaign spending. He pointed out that, while weekly reporting of donations to political parties is required during general election campaigns, the equivalent provision for referendums is much weaker. He argued that quicker reporting of spending by campaign groups is also needed, that the information that must be provided in spending returns should be enhanced, and that rules on coordinated spending between campaign groups should be clarified and set out so that they apply to all future referendums.

Dr Renwick also pointed towards the opacity of online campaigning. Information on digital advertising has improved since the ICR reported, as social media companies have created searchable ad libraries. But more information on how much is spent and who is targeted is still needed.

All of the witnesses also spoke of the need to improve information provision during campaigns. In 2016, the government had been able to publish pro-Remain literature up to four weeks before polling day, even though the campaign had started long before. By contrast, voters seeking credible sources of independent analysis of the options struggled to know where to turn. Yet Dr Renwick cautioned against giving the Electoral Commission too great a role in plugging this gap – as his 2019 report with Michela Palese on Doing Democracy Better argues, an independent body may be preferable. He also agreed with Mr Grieve and Baroness Stuart that giving the Electoral Commission an official fact-checking role would be undesirable.

Finally, Dr Renwick emphasised that the Electoral Commission’s governance arrangements must protect the institution’s impartiality, and be seen to do so. That requires cross-party and non-party oversight of its functions. He said it was a matter of concern that the Speaker’s Committee on the Electoral Commission currently – for the first time in its history – has a majority of members from one party. He argued that such a situation should not be allowed to recur.