Alan Renwick appeared last week before a committee of the Legislative Assembly of Alberta, Canada to give evidence on citizen-initiated referendums. 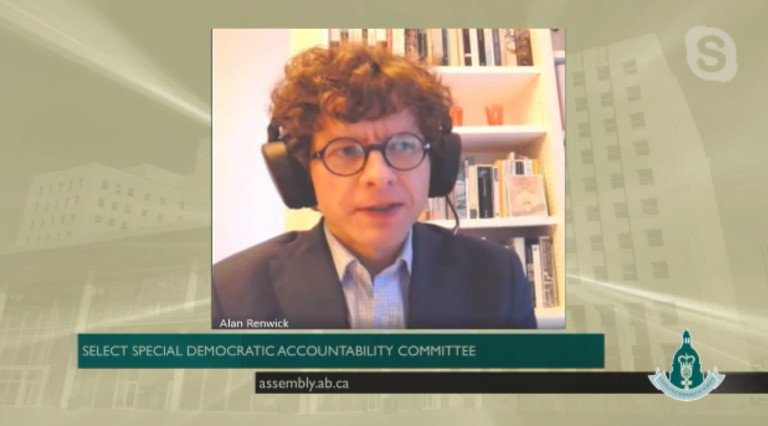 The Select Special Democratic Accountability Committee has been established to examine a proposal for the introduction of citizen-initiated referendums in Alberta. Dr Alan Renwick, Deputy Director of the Unit, took part in the committee’s first evidence session, on 23 September.

Drawing on the findings of the Independent Commission on Referendums and his own international research, Alan began by setting out some key aspects of citizen-initiated referendums that the committee might consider. He highlighted the type of referendum: whether it is an ‘abrogative’ vote (repealing an existing law or stopping a newly passed law from coming into force) or an ‘initiative’ (allowing voters to introduce a new policy or law). He also mentioned whether the result of the referendum is binding or advisory, and how signatures to call the vote are collected.

Alan then focused on the pros and cons of citizen-initiated referendums. He explained that such referendums can bolster democracy by giving people a direct voice in decision-making, and he noted that research suggests they tend to lead to policy outcomes that are closer to the preferences of the average voter.

On the other hand, Alan cautioned that citizen-initiated referendums often fail to encourage or facilitate meaningful deliberation. If badly designed, they cut out the legislature – the normal forum for such deliberation – from the legislative process. That can have harmful effects on the quality and sustainability of the measures passed. Such initiatives can also be dominated by campaigning voices, which in turn has the potential to silence rights and concerns of vulnerable minorities.

Alan noted that there are several ways in which deliberation can be inserted back into the process of citizen-initiated referendums. In Switzerland, initiatives are subject to detailed parliamentary scrutiny before going to a popular vote, and parliament can make a counterproposal. In Oregon – as set out in our Doing Democracy Better report – a citizens’ panel is often established early in the campaign period to examine the proposals. Alan particularly recommended a third option: a successful petition for an initiative should lead not directly to a public vote, but to a citizens’ assembly. This would examine the proposal in detail and decide whether it should go to a popular vote or not.

You can watch Alan’s presentation here from 11:32.