The Brexit process may no longer dominate the news, but it remains far from over, and parliament will face further Brexit-related challenges. Today, the Unit launches ‘Parliament and Brexit’, a new joint report with the UK in a Changing Europe which explores these challenges. 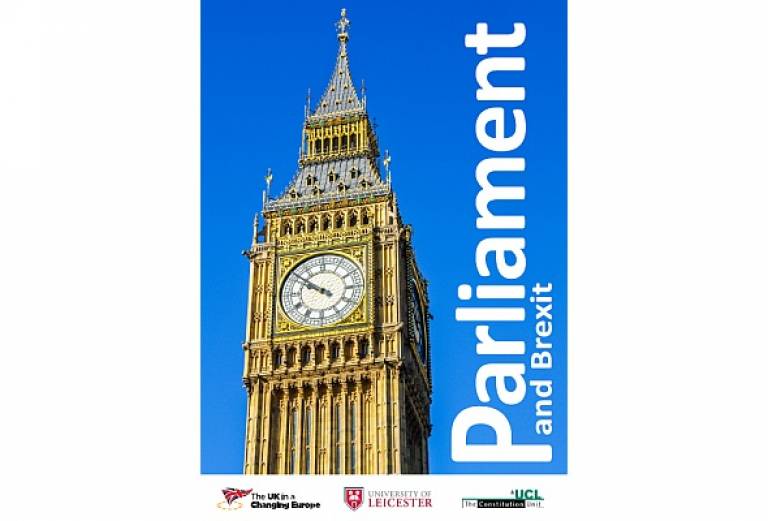 The Brexit process may no longer dominate the news, but it remains far from over, and parliament will face further Brexit-related challenges during and beyond the transition period. Today, the Unit launches ‘Parliament and Brexit’, a new joint report with the UK in a Changing Europe and the University of Leicester. The report analyses parliament’s role in the Brexit process to date, and asks what changes may be needed to ensure that parliament is ready for phase two of the negotiations and beyond.

While the nation and government are currently responding to the Coronavirus outbreak, this report holds important lessons about the past, and ideas for the future when parliament is able to resume its business fully.

The Brexit process brought parliament right into the political spotlight; never before has there been such great interest in its role in our constitution. The challenges and opportunities which have arisen thus far have taught us many lessons about parliament’s somewhat contested position.

This report looks back on the Brexit period from 2016 onward, and examines what we’ve learnt from the process so far. It also casts an eye ahead, looking at parliament’s role in the transition period and beyond, and analysing what that could mean for its structures and ways of working.

The 'Brexit and Parliament' report, published jointly with the UK in a Changing Europe and the University of Leicester, brings together leading academic and practitioner voices to provide a thorough analysis of parliament’s past and future Brexit role. The sections of the report explore parliament’s role in the UK constitution, Brexit and the parliamentary parties, Brexit scrutiny so far, and both the topics and mechanisms for parliament’s future scrutiny work.

Providing the first main chapter in the report, Unit Director and UK in a Changing Europe Senior Fellow Meg Russell emphasises parliament's unique and central role in the country's political system. Parliament found itself subject to mounting attacks in the wake of the EU referendum. Yet, her chapter points out, the real conflict was not between parliament and people, but between a Conservative government and its own backbenchers over how to interpret the 2016 referendum result. In a separate chapter, Unit researcher Lisa James reviews the passage of two key Brexit bills, demonstrating how the level of parliamentary scrutiny built into the next stages is much curtailed compared to what went before.

Other contributions to the report look forward to the transition period and beyond, identifying key challenges which lie ahead for parliament - including a wealth of primary and secondary legislation, the need for effective treaty scrutiny, and the challenge of resettling relationships with the devolved administrations. Several contributors have affiliations with the UK in a Changing Europe, as well as with their own institutions.

Chapters and contributors of the report:

The role of parliament in the constitution

Brexit and the parliamentary parties