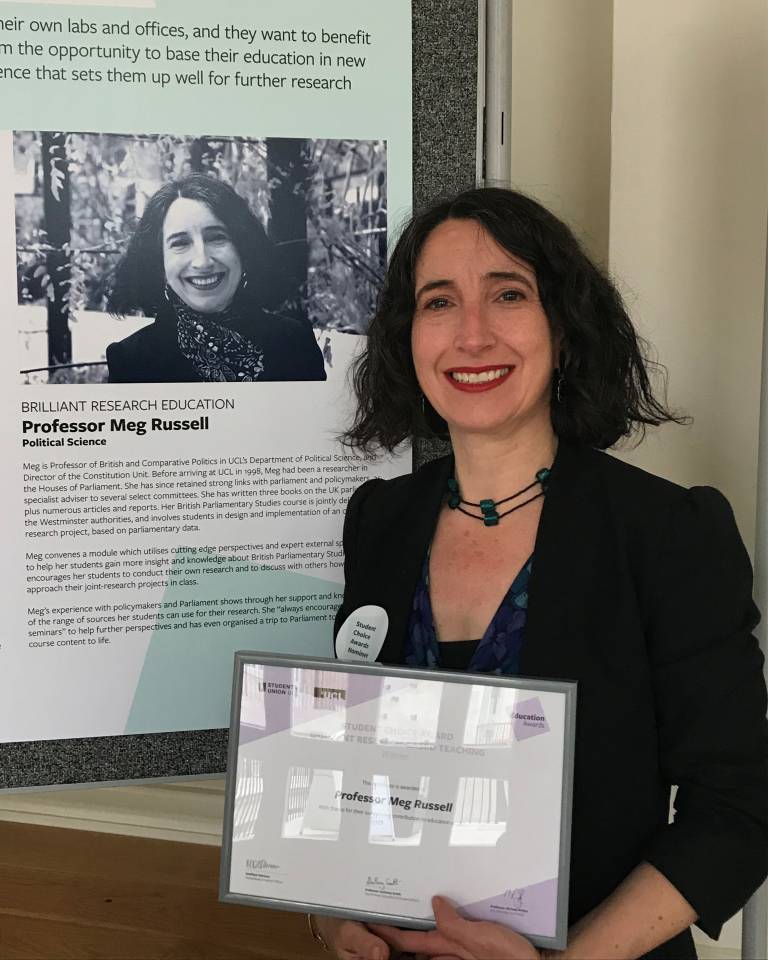 Constitution Unit Director Professor Meg Russell has been awarded a prize for “Brilliant Research-Based Education” at the annual UCL education awards. This was a “Student Choice Award” meaning that nominations came from UCL students. In total 54 UCL academics were nominated for the award, and Meg was chosen from a final shortlist of three. The award recognises “members of staff who educate students about the latest, cutting-edge knowledge, or who enable taught students to create knowledge by conducting their own research”.

Meg was nominated for this award by her undergraduate students on the course British Parliamentary Studies, which is part of the national parliamentary studies programme coordinated by – and joint delivered with – the Westminster parliamentary authorities. As well as lectures by Meg as course convenor, the students get to hear from several visiting speakers from parliament, and enjoy a visit to parliament where this year they heard talks from, amongst others, Shadow Foreign Secretary Emily Thornberry. A key innovation of the course, which explains the link to this award category, is that the students collectively conduct a research project on parliament which forms part of their final assessment. This year students collected data on what kinds of people and organisations submit evidence to select committees. In previous years student projects have included the pattern of ‘urgent questions’ under Speaker John Bercow and the effect that the arrival of Jeremy Corbyn as Labour Party leader had on the culture of Prime Minister’s Questions.

I’m absolutely delighted to have won this award, particularly as the nomination came from students themselves. I’m both grateful and flattered by the fact that my students enjoyed the course enough to nominate me, and that the judges chose me from such a wide field. I hope the award reflects my teaching abilities, but it surely also reflects what a fascinating time it is to be studying the British parliament. My own research shows that parliament matters more than people often think, but that point has been underlined a hundredfold by the recent Brexit process. The students and I spent a fascinating and enjoyable term together discussing and watching developments, and as ever I was very impressed by their enthusiasm and hard work for the class project.

Head of Teaching in the Department of Political Science Dr Christian Schuster said:

As a Department, we are thrilled that Professor Russell has won a UCL-wide, highly competitive award for Brilliant Research-Based Education. It speaks to the outstanding quality and cutting-edge nature of her teaching, and the value that UCL and the Department of Political Science place on integrating frontier research and policy-making experience into our teaching.