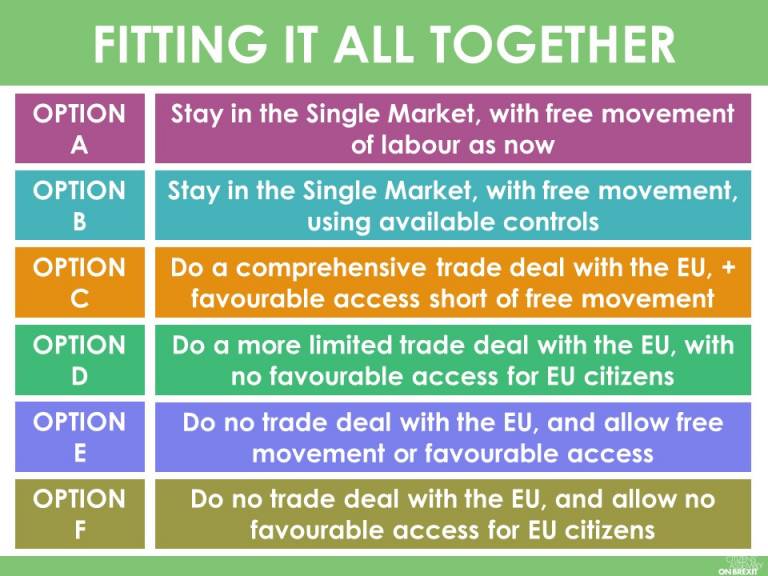 A representative body of UK citizens today sent politicians a clear message in favour of a 'soft' Brexit. Faced with the range of possible outcomes, they chose to retain free movement of labour, but with the UK government exercising all available controls to prevent abuse. If a deal can't be reached in negotiations on trade, staying in the Single Market and Customs Union was preferred to no deal at all.

Members of the Citizens' Assembly on Brexit [1], randomly selected to capture the diversity of the UK population, met in Manchester this weekend to consider options for the UK's post-Brexit relationship with Europe.

After hearing from a range of experts [2], and from politicians from both sides of the Brexit divide, they took four key votes [3]:

The Citizens' Assembly on Brexit is part of the UK in a Changing Europe programme, which provides high-quality objective analysis of Brexit-related matters. The research team is led by the Constitution Unit at University College London. The Assembly has been endorsed by a range of high-profile figures from across the Brexit divide, including Conservatives Bernard Jenkin and Nicky Morgan, Labour's Chuka Umunna, and UKIP's Suzanne Evans [4]. Crucially the Assembly's members were selected to reflect last year's Brexit vote, alongside social class, region, age, gender and ethnicity. Of the 50 members, 25 voted Leave in the 2016 referendum, 22 voted Remain and 3 did not vote [5].

This weekend the members heard presentations from Conservative MP Graham Brady - chair of the prestigious 1922 Committee, and a prominent Leave supporter - and Labour MP Kate Green - a strong supporter of remaining in the Single Market.

"These findings are important, because this is the first opportunity UK citizens have had since the 2016 referendum to consider in depth what version of Brexit they want, and to communicate that to policy-makers.

"After two weekends of study and deliberation, drawing on expert evidence and balanced briefing materials, citizens concluded that politicians should seek a bespoke deal with the EU. But if that proves impossible, they would rather remain close to Europe than follow some politicians' proposal to go it alone.

"The Citizens' Assembly on Brexit not only demonstrates citizens' views on this key issue, but also the wider benefit of such deliberative processes. Members with very different views came together, listened to each other and to the evidence, and were prepared to reach compromises. Feedback from members was overwhelmingly positive. This exercise shows that citizens are willing and able to tackle complex divisive issues. Now that they have done so, politicians should take those views seriously."

"It's a great pity that we didn't have a citizens' assembly before the referendum took place, on what is actually the biggest political, economic and constitutional decision of my adult lifetime.

"I think we have an opportunity now to use the outcome of the Assembly to inform decision-making as we leave the EU."

Graham Brady MP, Chair of the Conservatives' 1922 Committee, said to the Assembly:

"Brexit is an issue that divides political parties, so I want to thank participants for doing what they have been doing. This is an important issue for our country.

"Members have worked together in a constructive spirit - a great model for us to follow.

"After Brexit, we will have resumed our position as a sovereign, independent, democratic country. That only works if people get involved and are prepared to contribute to the debate and process."

The Citizens' Assembly was organised by a consortium of universities and civil society organisations: the UCL Constitution Unit, Centre for the Study of Democracy at the University of Westminster, University of Southampton, Involve, and the Electoral Reform Society.

> Recap on the weekend's activities on Twitter by searching #BrexitAssembly

[1] The Citizens' Assembly on Brexit is an opportunity for a diverse group of 50 UK voters with different viewpoints to learn about the issues of trade and immigration, to deliberate with each other and come to recommendations on the form Brexit should take. The Assembly has met over two weekends: 8-10 September and 29 September to 1 October 2017.

The Assembly's deliberations and conclusions will be summarised in a report, to be presented to government and parliament.

[2] During the first weekend, Assembly members heard from various academic experts with differing views on trade and immigration post-Brexit. They also received a range of balanced briefing papers which had been approved by the project's Advisory Committee (see [6] below). The presentations and briefing papers can be found on the project website.

[3] Assembly Members voted four times, ranking their preferences for the UK's policy on trade with the EU, trade with countries outside the EU, migration, and the complete deal on trade and immigration, respectively. Full details on the votes are available in a post on the Constitution Unit blog.

In the first vote, a limited trade deal won the largest number of votes, but once other preferences were taken into account a more comprehensive trade deal found the greatest support. As this may not prove achievable the votes showed what would happen if it is taken off the table. In this case the preferred option is a limited deal. But if no deal is available members split 31 to 19 in favour of staying in the Single Market.

In the third vote, members chose between five options for post-Brexit migration policy. On first preferences, a majority of members (26 out of 50) wanted the UK to maintain free movement of labour but make full use of controls so that migrants who are unable to support themselves financially cannot abuse the system.

In the final vote, members reiterated their earlier preferences for a bespoke trade deal and an arrangement allowing EU citizens favourable access to the UK. If no deal is available, 38 members supported options whereby the UK would stay in the Single Market, against 12 members who would favour no deal.

[4] A full list of endorsers, with quotations, can be found on the project website. The Assembly design, briefing materials and the selection of experts were reviewed by an Advisory Board that included both Leave and Remain supporters, as well as experts in the presentation of neutral information on Brexit-related matters.

[5] The following table shows how the diversity of the Assembly matches with the broader UK population. 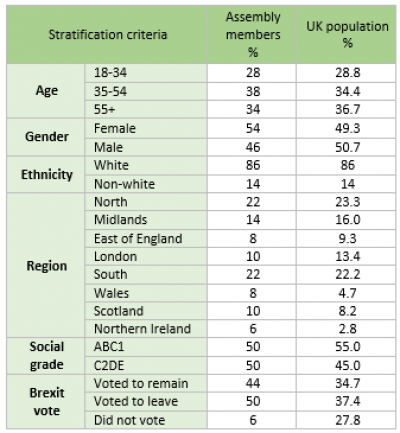 Image: Members of the Citizens' Assembly on Brexit and the assembly team courtesy of Cade Hannan