What is the royal prerogative? 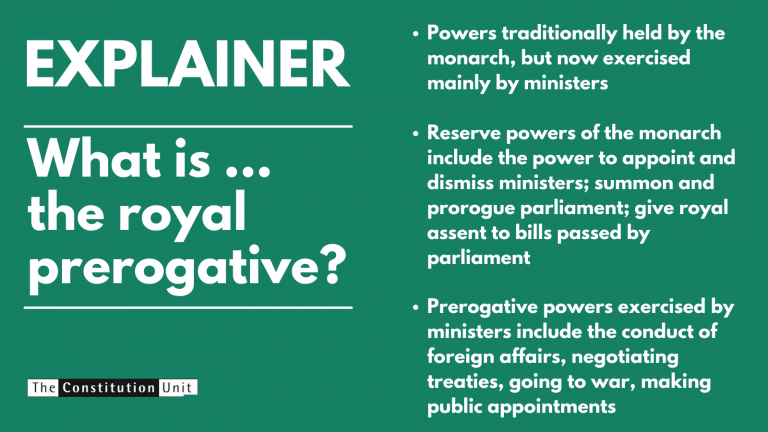 Prerogative powers are powers which have belonged to the monarch since the Middle Ages, but in modern times are exercised largely by government ministers. The most important powers exercised by ministers are the power to make war and deploy the armed forces; to conduct foreign policy and make treaties; to make public and judicial appointments; to issue passports; and to grant pardons and honours.

But the King still exercises some prerogative powers himself, known as his reserve powers or the personal prerogatives. The most important of these are the power to appoint and dismiss ministers, including the Prime Minister; to summon and prorogue parliament, i.e. end the current parliamentary session; and to give royal assent to bills passed by parliament. Royal assent to bills is automatically granted, once a bill has been passed by both houses of parliament. The other powers are exercised on the advice of ministers, advice which—by convention—the King is normally expected to follow. But as the ultimate guardian of the constitution, the King has power to dismiss a Prime Minister who refuses to resign after losing the confidence of the House of Commons; and in future the King may be expected to refuse an untimely request for prorogation, lest it be declared unlawful.

Ministers are accountable for their use of prerogative powers – the same is true for statutory powers (powers conferred on ministers through Acts of Parliament). If there is concern that ministers have used prerogative powers improperly, the exercise of these powers can be regulated by the courts. A recent example of this is the 2019 prorogation ruling in which the Supreme Court decided that Boris Johnson’s advice to the Queen to prorogue parliament for five weeks was unlawful.

The past two decades have seen certain prerogative powers become subject to greater control by parliament. Some have been replaced by statutory powers. The power to appoint and regulate civil servants was placed on a statutory footing by the Constitutional Reform and Governance Act 2010 (CRAG 2010), and the Fixed-term Parliaments Act 2011 removed the monarch's prerogative power to dissolve parliament, and placed dissolution in the hands of parliament. This may be reversed by the Dissolution and Calling of Parliament Bill 2021, which would restore the prerogative power of dissolution. In other cases, the power remains a prerogative one, but statute gives parliament control over its use: CRAG 2010 codified the convention that new treaties have to be laid before parliament before the government can ratify them. Lastly, some prerogatives, like the war-making power, may be regulated by constitutional convention. Following the decision to intervene in Iraq in 2003—which was approved by a vote in the commons—a convention seemed to emerge that, before troops are deployed overseas, the commons should normally be allowed to vote on the matter; but that was not followed when Theresa May authorised airstrikes in Syria in April 2018.

The reform of the prerogative in the UK (and in other ‘Westminster’-style democracies) is currently the subject of a five-year comparative research project, involving the Constitution Unit’s founder, Professor Robert Hazell.