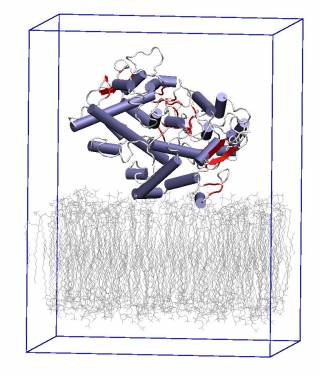 COX was the first monotopic enzyme to have its structure experimentally determined. Being monotopic, it is bound to one side of a cell membrane (see figure), in this case the endoplasmic reticulum, and it synthesizes prostaglandins, a local hormone, from fatty acid substrate. There are two genes that encode COX proteins, COX-1 and COX-2, and these are genetically and structurally similar but have different biochemical function.

COX is inhibited by non-steroidal anti-inflammatory drugs (NSAIDs), the most common examples of which are aspirin and ibruprofen. These drugs have significant side effects and these result, it is assumed, from the inhibition of COX-1. So-called "COX-2 inhibitors" are designed to minimise these side-effects by preferentially binding COX-2 over COX-1. Unfortunately, several of these drugs (e.g. Vioxx) have been recently shown to have further side effects. These drugs were primarily designed using static structural information.

We are using large-scale classical molecular dynamics to study the differences in the dynamics between COX-1 and COX-2. It is hoped that the differences revealed will aid the development of future NSAIDs.