How clean is your phone?

Find out the results from one of the Healthy Infrastructure Research Group's most popular public engagement activities - phone swabbing.

At our stand, you swabbed the back of your phone and then placed the swab in a machine. The machine measures the level of microbial activity on a surface by measuring the amounts of a chemical microbes use for energy, ATP. Your results were shown in Relative Light Units (RLUs): the more microbes present, the higher the RLU value.

The graphs below show the distribution of results on the night you took part in our activity. The numbers under each bar show the range of RLUs and the number above the bar show the number of phones we found to be in that range.

There was a variety of results on the night – the lowest was 105 RLUs, the highest was 5807 RLUs. The average level was 1089 RLUs. Have a look at the relevant table below to see how your phone did…

Growing microbes from your phone

We used dipslides with special gel that has the right balance of food for two different types of bacteria, Staphylococcus aureus and coliform bacteria, to press on to your phone. We then put the gel into an incubator at 37 °C for 72 hours to let any bacteria that were picked up from your phone grow.

Staphylococcus aureus is a bacterium that is often found on our skin and in our nose. It is often resistant to antibiotics. Coliform bacteria are a group of different species of bacteria, including E. coli, which live in the human gut.

The overall results for the evening showed that most people had quite a few Staphylococcus aureus bacteria on their phones, but we didn’t find any coliform bacteria. This makes sense as Staphylococcus is often found on your skin, whereas we’d only expect to find coliforms if you touched your phone without washing your hands after going to the toilet.

You can find your results from the experiment you took part in below. The numbers under each bar show the range of cells per phone and the number above the bar show the number of phones we found to be in that range. 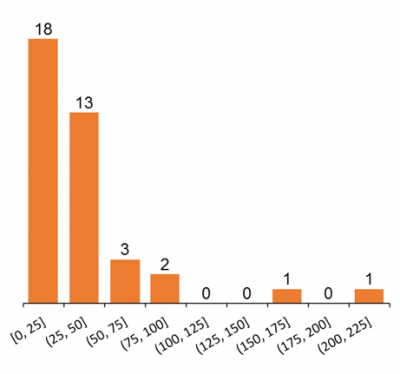 For the Feb 2019 data, the average number of Staphylococcus aureus cells per phone was 37, with the maximum being 209 and the minimum being 0. You can see your personal results in the pdf table above (look for the Phone ID you were given). As a rule of thumb, less than 50 cells is low, 50-100 cells is moderate, and over 100 cells is high.