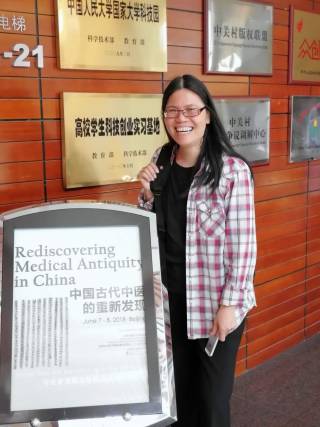 One of the important early Chinese medical texts to include therapeutic exercise as a treatment is Zhubing yuanhou lun (Treatise on the Origins and Symptoms of Medical Disorders, hereafter Bingyuan). It was produced by the court physician Chao Yuanfang 巢元方 (fl. c. 605–616 CE) and his colleagues at the decree of the second Sui emperor in 610 CE. Bingyuan, the earliest known nosological text to be found in China, is a medical compendium in 50 juan, describing 1739 diseases and, under seventy-one headings, detailing their aetiology and symptoms. It lists 110 sets of therapeutic exercises, known as daoyin (lit. guiding and pulling) which were believed to be helpful in the treatment of specific diseases.

The content of these daoyin exercises is the main focus of my PhD thesis. My initial task was to translate the descriptions of the relevant diseases, together with their corresponding daoyin instructions. This was followed by an examination and analysis of the text, in order to gain a deeper understanding of the daoyin practices recommended in Bingyuan.

To establish a foundation for my research, a literature review was undertaken. Western scholars such as Catherine Despeux and Livia Kohn have already conducted valuable research into the daoyin tradition, mainly in the context of Daoist longevity and yangsheng practices.

This research focuses on the curative aspects of daoyin practices as described in Bingyuan. It seeks answers to the following questions:

In order to answer some of these questions and to understand more fully the medical aspects of daoyin exercises in Bingyuan, the research draws insight from the Chinese medical theories which inform these exercises. Techniques employed in the exercises, including those relating to posture, breath and moving the qi, are examined.

A synopsis of the textual history of daoyin helps to clarify the historical development of the daoyin tradition and the particular contribution made by its practices in Bingyuan. The primary task is to trace the relationships between different daoyin manuscripts and books. Texts including Yinshu引書, Huainanzi 淮南子, Baopuzi抱朴子, Qianjin yaofang千金要方, Yangsheng yaoji 養生要集, Zhengao 真誥, Yangxing yanming lu 養性延命錄, Taiqing daoyin yangsheng jing 太清導引養生經,Yunji qiqian 雲笈七籤, and Ishinpō 醫心方 are examined. Secondary sources, written in English, French, German and Japanese, are explored, as well as those in traditional and simplified Chinese.

The research examines the historical background and political context in which the text was compiled, seeking answers to questions such as: