Chemistry and the Environment

Chemistry can help us to understand, monitor, protect and improve the environment around us. Many environmental problems and processes are chemical, and to understand them requires knowledge of the fundamental chemistry involved. At UCL Chemistry we focus on development of new tools and methods for probing the environment in its natural and perturbed state, including under extreme terrestrial and extra-terrestrial conditions.

We undertake research across a wide range of areas including laboratory study of gas phase kinetics and photochemistry of trace species applied to environmental issues such as stratospheric ozone loss, urban smog formation, and global warming, studies on the formation, properties and reactivity of molecular dications of relevance in (exo)planetary ionospheres, and understanding the fate and impact of materials on environmental ecosystems.

The chemistry and properties of charged species are important in determining the composition and chemistry of the upper layers of planetary atmospheres. Perhaps surprisingly, modelling has indicated that the properties and chemistry of di-positive ions (dications) can influence such energized media (planetary atmospheres, cometary tails, etching plasmas, interstellar clouds. Indeed, for example, O2+, S2+ have been detected in planetary ionosphere and CO22+ has been recently detected in a cometary tail. To understand the influence of these unusual and highly-reactive species on these environments a laboratory investigation of their chemistry is required. We have developed a number of original experimental approaches, involving the design and construction of unique high-vacuum apparatus, to probe the formation, unimolecular and bimolecular chemistry of dications. For example, we have recently published a study of the reactivity of Ar2+ with O2 – encounters that are thought to be important in the Earth’s ionosphere. The investigation reveals that several different reactive pathways are available in these collisions (single electron transfer, double electron transfer, bond-formation), including the formation of ArO+. The relative importance of these different reactive pathways is quantified and a detailed insight into their energetics is revealed. In addition the experiments reveal detailed pictures of the mechanisms of these different processes. A recent highlight from the Rowley research group has focussed on the cross coupling of reactions between chemical families which exist in the atmosphere.1,2  These reactions are of profound interest in middle latitude stratospheric ozone loss, which may be exacerbated with a warming climate.  However, such processes are notoriously difficult to characterise in the laboratory given the complex self-reaction chemistry of the radicals involved.  The figure below shows a series of temporal traces of ClO radical abundance obtained with increasing presence of the co-generated HO2 co-reactant, both produced in laser flash photolysis and monitored using broadband UV spectroscopy.  These data were analysed to extract the rate constant for the ClO + HO2 reaction and quantify the considerable impact of this and analogous reactions on the environmental threat of increased solar UV irradiance. 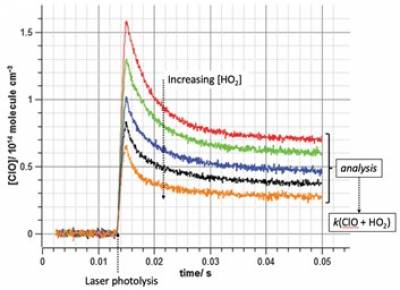 Assessing the Risk of Nanomaterials in the Marine Environment

We have recently published two papers which describe the impact of manufactured metal oxide nanoparticles (nTiO2 and nCeO2) on marine microbes, in collaboration with Dr Christie-Oleza, University of the Balearic Islands, Spain.

Titanium dioxide (nTiO2) represents the highest produced engineered nanomaterial worldwide, yet its impact in the marine environment is poorly understood. Despite 70-80% use in the cosmetics industry, typically only pristine research-grade materials are examined. In our work recently published in Environmental Science: Nano, the effects of research-grade and nTiO2 extracted from common consumer goods upon marine microbial species were investigated, demonstrating cell decline of the cyanobacterium Prochlorococcus during short-term exposure (72 h), but ultimate recovery under environmentally relevant conditions. Exposure of natural communities reveals negligible effect of nTiO2 on marine microbial community structure. Therefore, the risk of nTiO2 exposure in the marine environment appears low. 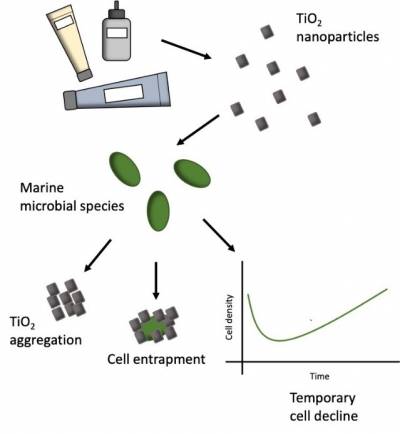 Transportation that improves accessibility is a major economic driver although it is largely ‘driven’ by the combustion of liquid fuels. In the mid-1970s perhaps, the best-known application of heterogeneous catalysis, the catalytic converter used to clean up the side-products of the internal combustion process, had become widespread. The ‘three-way catalyst’ is now widely applied for the purification of emissions from petrol-driven engines, whereas for the hotter-burning diesel-powered vehicles, an alternative technology is required, particularly to deal with higher levels of NOx. The modern-day technology uses a combination of NH3 as a selective catalytic reduction (SCR) agent and Cu and Fe containing zeolites and is capable of reducing these emissions almost to zero. Recent work by the Beale group has applied advanced spectroscopic techniques, particularly operando X-ray absorption, X-ray diffraction and modulation excitation Infra-red (IR) absorption spectroscopy to determine that single Cu ions are able to convert NOx via a Cu2+/+ redox mechanism and the formation of nitrosamine (a) and nitrate intermediates (b) – see figure 1 below. The results from these studies are useful for improving the performance of this technology as well as providing some design criteria for the next generation of this technology. 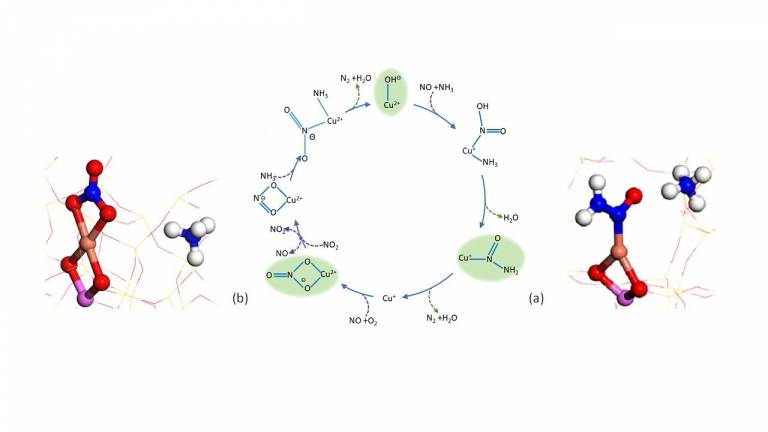