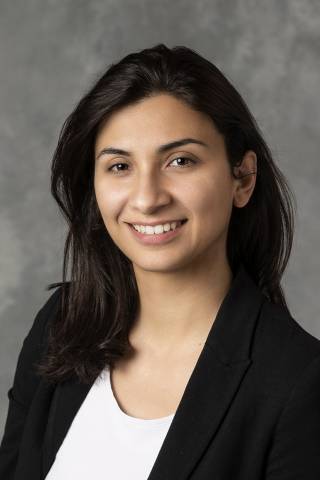 How would you describe your area of study or work?

I am interested in the future of cities and how technology and people will shape our planet.  My background is in architecture and engineering and if I were to describe my area of study, I would say that it falls between design and science. The past couple of years, I have been working on the integration of urban planning and design with urban science, and in the development of applications and visualisations to communicate the produced future city scenarios to the public. However, I am also working in the study of new technologies for urban practices, such as remote sensing, virtual and augmented reality, IoT, as well as creative technology.

What is your favourite part of your job/area of study/area of research?

I enjoy working in multiple research areas and applying my knowledge and skills in several different fields. This is a characteristic of engineering studies that is not often mentioned and yet is really powerful. I have been involved in projects from research in data science and coding, to designing animations, to teaching, to flying drones in Lima, Peru and demonstrating 3D modelling and drone technology to young people whilst enjoying flying and crashing drones in the process. I am truly grateful to be given the opportunity to collaborate with incredible people around my field, from brilliant software engineers, to designers, animators, planners and librarians. I believe that being capable of understanding and implementing more than one discipline makes you a more versatile employee or candidate.

What is the most valuable lesson you have learnt during your studies/career so far?

To have faith in myself. In the social media era, it is not unusual to receive unconstructive criticism and allow negative comments to get to you. I have learned to follow my own passion and do what I think is right. I am really grateful to have had the support of my mentors and professors while I was studying who believed in me and allowed me to be involved in some really cool academic activites during my studies. This has allowed me to keep growing as a person; I never stop learning.

Describe your day-to-day life as an engineer/engineering student

The majority of my day is spent in the Alan Turing Institute, where I work on urban analytics. I also spend some of my days teaching on the Enviromental Architecture MSc in RCA and also on different external projects. I am involved in outreach, game development, and workshops. Even in my free time, I often catch myself watching a TV show such as Game of Thrones and breaking down in my mind how the introduction was animated and thinking of the software applications and techniques used.

What attracted you to participate in outreach and engagement activities?

I was always interested in the communication of science. As an architect and a designer, I had the need to communicate and make my work understood to people outside my field. My first outreach activity in UCL was in my first year of my PhD in The Barttlet Centre for Advanced Spatial Analysis (CASA), when lecturer Dr. Martin Awstwik suggested orginising a 3D printed workshop at the Green Man festival in Wales. This workshop received a lot of interest and I was amazed at how much young people were interested in the engineering part of the work and how many interesting questions we received. From that point on, I was compelled to bring my work to the public.

What is the best thing about being involved in outreach activities?

I believe that it is important to bring work outside of the closed walls of a field or enviroment. Communicating research can empower people to understand the state-of-the-art technology in a given field without going into technical details, thus, allowing a better view of how the future is going to be shaped. I am always extremely happy when one of the projects I am involved in is picked up by the mainstream media, as it means that it can relate and be of interest to a larger number of people. It is something that I always consider when developing new ideas.

What type of activities or programmes have you led/run?

The type of outreach activities I run are usually creative technology projects that relate to the better understanding of the urban environment and the data it produces. From 3D modelling and 3D printing mini-skyscrapers for London, to using drone outputs for participatory mapping, to making Arduino workshops for creating physical objects that run with city data.

What outreach activity or programme are you most proud to have been involved with?

The CASAUCL “Drones4Good” workshop series which won the "Collaborate to Innovate" Provost's Engineering Engagement Award. This workshop is very dear to my heart as it was inspired by my PhD supervisor, CASA’s Professor Andrew Hudson-Smith, who sent me to Lima in Peru to fly drones as part of the RemapLima project. The project, a collaboration between The Bartlett’s Development Planning Unit, CASA and Drone Adventures, used drones to map favela areas and used outputs for engaging citizens in the urban planning processes.

The Drones4good worshop is itself based at the Bartlett’s Centre for Advanced Spatial Analysis (CASA) and we founded together with CASA’s Senior Researcher Dr. Richard Milton. It is run with the help and support of a collaborative group of students and researchers from CASA and UCL. The purpose of the workshop is to educate young people in the use of drone technology for “good”, such as capturing and mapping the environment, search and rescue applications, 3D printing custom drones and 3D reconstruction of objects by capturing imagery and turning it to 3D objects. Drones4Good runs several workshops a year for 12–18 year-olds, mostly for disadvantaged schools around London, organised in partnership with UCL Engineering. It was an incredible honour to see the workshop being selected and featured in the “Bartlett 100”  this year,  celebrating the school’s 100 years, as one of the best architecture schools in the world.

What advice would you give young people wanting to study or work in STEM-related fields?

I would say to find a mentor, someone more experienced, to support your path and a role model to look up to. Ask questions and never stop learning.