There are many ways in which GO data is used to inform research decisions, from describing the roles of a gene product to analyses aimed at interpreting large-scale proteomic or transcriptomic data. The purpose of Gene Ontology curation is to provide accessible data to researchers. This YouTube summary of one of our papers provides a very nice overview of how manual curation makes an impact on data interpretation. Many of our publications demonstrate how GO annotation data is being used and the need to continue to improve the GO resource. Below we also show a few examples of how our curation projects have added the descriptive detail needed for scientists to make informed decisions about the directions of their research projects.

As a result of this curation project, we now have a improved the representation of the role of the TGFβ signalling pathway in heart development The GO annotation of the heart development role of 17 key proteins from the TGFβ signalling pathway.

Re-analysis of a hypertension microarray dataset

We have demonstrated an improved interpretation of the PAH-SSc dataset with the annotations supplied by the Cardiovascular GO Annotation Initiative (Alam-Faruque et al., 2011). 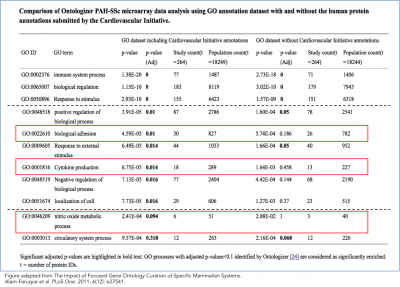