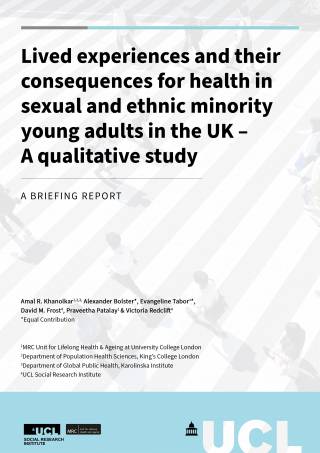 Sexual and gender minority individuals have substantially higher risk for mental ill-health, poorer wellbeing, and report higher rates of adverse health-related behaviours. Most of this evidence comes from studies conducted on White individuals, especially in the European context. Less is known about health and wellbeing in those individuals who identify with more than one minority identity (ethnic, sexual, gender, religious). Our study 'Multiple Minority Identities & Mental Health - A mixed-methods approach to addressing health inequalities', is designed to address this gap in knowledge. The qualitative component of this study is based on interviews with 29 young individuals who identify as being both ethnic and sexual/gender minority and resident in the UK.

The preliminary findings are summarized in this briefing report. Participants’ experiences at the intersection of minority identities were very diverse and they described several challenges, barriers & behavioral changes that impacted their health and wellbeing, and their integration in both ethnic minority and sexual minority communities. Dominant findings include participants experiencing high levels of mental ill-health, a severe lack of appropriate mental health support, and significant discrimination from within the sexual minority community including stereotyping and racism. Participants described physical rejection from LGBTQ+ spaces as well as a more general lack of representation in the LGBTQ+ community, and the need for ethnic minority specific queer spaces.

Despite the significant negative experiences and challenges faced by participants, some also highlighted key 'protective factors’ such as 'Queer Joy', and pride in identifying as ethnic and sexual minority, and the value of 'microcommunities' where they didn't have to explain themselves.

Some policy implications include improving accessibility to formalized mental health support including greater representation of ethnic minority and sexual minority therapists and stronger government policies to efficiently tackle sexual, ethnic, gender and faith-based discrimination in physical and virtual spaces. There is an urgent need to educate both the wider LGBTQ+ and heterosexual communities of the potentially adverse impacts discrimination may have on individuals identifying with multiple minority identities and improve access to ethnic minority specific LGBTQ+ virtual and physical spaces.

This study is a collaborative project between the MRC Unit of Lifelong Health and Ageing at UCL and the Social Research Institute at UCL (Co-PIs Dr Amal R. Khanolkar & Dr Victoria Redclift).

To read the report: