Professor Tammaryn Lashley is Professor of Neuroscience and Director of Research at Queen Square Brain Bank for Neurological Disorders. 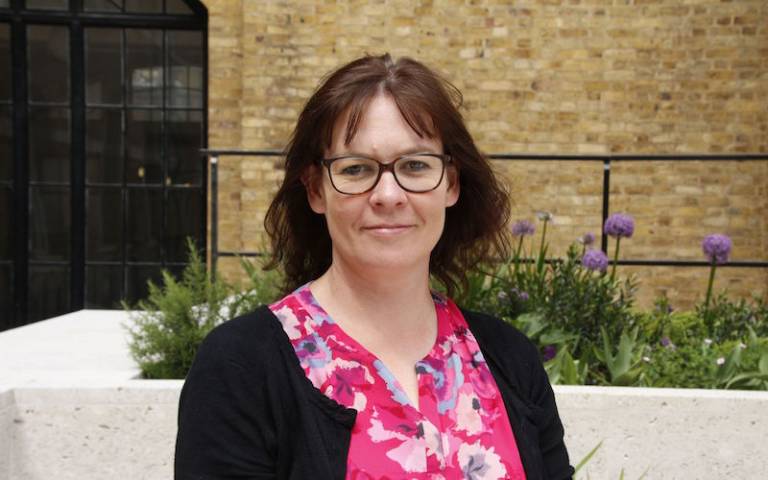 To mark International Day of Women and Girls in Science and International Women's Day, we caught up with Professor Lashley to ask her about her research, her advice for women who want to follow a career in scientific research and her goals for the future.

Can you tell us about your interest in studying Alzheimer’s disease and why you think this is an important area to study?

I don’t think I need to tell anybody how important the research is on Alzheimer’s disease and all of the dementias. They are devastating diseases that we need to urgently find cures for. My interest into these diseases developed over time, mainly during my PhD, where I got to see first-hand the devastation that is caused in the brains of people with these diseases.

Can you tell us about what you are working on at the moment in this area?

My current research projects all involve using post-mortem human brain tissue from people that have donated their brains to research. This is an absolute necessity to be able to investigate the changes in the brains of people that have had the diseases. I have projects looking at the morphological changes in the brains, so we observe the differences between diseased brains and normal brains - through to other projects developing potential biomarkers that will be able to diagnose neurodegenerative diseases correctly and earlier during life.

You held the position of co-chair of the UCL Alzheimer’s Research UK Network. Can you tell us about your role there and how you began in this position?

I held the position of co-chair of the UCL Alzheimer’s Research UK Network, although I have recently stepped down from this position. The role of the network is to bring together researchers from around UCL that are all working on dementia to share expertise and ideas for future projects. There is also a budget to fund junior researchers and PhD students to attend conferences and pump-priming and equipment grants to facilitate research ideas.

Your public engagement activities are vast and include delivering several lectures to the public on dementia research; taking part in events including Silvering the Cerebrum, a UCL event combining art and research; as well as appearing on live TV in the Victoria Derbyshire Show; and being interviewed by the Financial Times Magazine. Can you explain why you believe in the benefit of raising public awareness?

It is vitally important to raise awareness not only of the diseases themselves but also the research that is being undertaken. As scientists working in a laboratory we need to convey or raise awareness of what we are doing. I always find that as scientists we also learn things from engaging with non-scientists who also have an interest in curing these diseases.

You have a track record of promoting women in science and encouraging girls and women of all ages to follow a career in scientific research. Why are you passionate about getting more women involved in science?

I am passionate about promoting science to both women and men, certainly girls need to see role models in scientific positions. However, I think it is important not to forget to raise awareness about both genders being able to work together.

Find an area of research that you enjoy, it is easier to work hard if you enjoy what you are doing. There are also multiple ways of getting to where you want to be. I didn’t start my PhD until after I had already had two research technician positions. I then undertook my PhD part-time, because I wasn’t in a position to live on a student stipend. This was because I had two children while doing my PhD. So it took me a little longer but I got there in the end.

What advice or inspiring words do you have for young females interested in studying STEM subjects, particularly those in their last year of school who are considering their next step?

Make contact with scientists, PhD students and post-doctoral scientists and talk to them. Ask them about their jobs, what they do day-to-day. Often the idea and the reality of a job are very different. It may seem daunting to contact scientists and often people won’t reply but at Queen Square Brain Bank we run several work experience workshops for students at different stages and this is a good way to interact with scientists.

I used to play in a Brass Band and play the tenor horn. Something I wish I had more time to do now...

That’s a hard one, because there are so many people that I have been fortunate to interact with in both my professional and personal life. In my professional life then Professor Tamas Revesz has been my PhD supervisor and mentor for many years and I have certainly learned learnt so much from him. Personally my husband and three children, as we have been through tough times with our youngest daughter, but we have all learnt so much through these times.

That’s a hard one too! I am always moving the goal posts. Although this year has been difficult with lab closures and limited occupancies. The next year I would like us to return to some kind of normality in the lab where we can push forward with our projects and to get the whole team back together in the lab.

Professor Tammaryn Lashley took up a position at the Queen Square Institute of Neurology after working at the National Institute of Medical Research where she focused on spinal cord regeneration.

Her research compares the underlying pathology with detailed clinical histories, which enables a more accurate diagnosis in life for future patients. Her research team has expanded to cover many different disciplines including neuropathology, multi-omics approaches and epigenetics to understand the initiating processes in different neurodegenerative diseases.