This Pride Month we speak to Professor Edward Wild (IoN) about the importance of Pride Month to the UCL community and what it personally means to him. 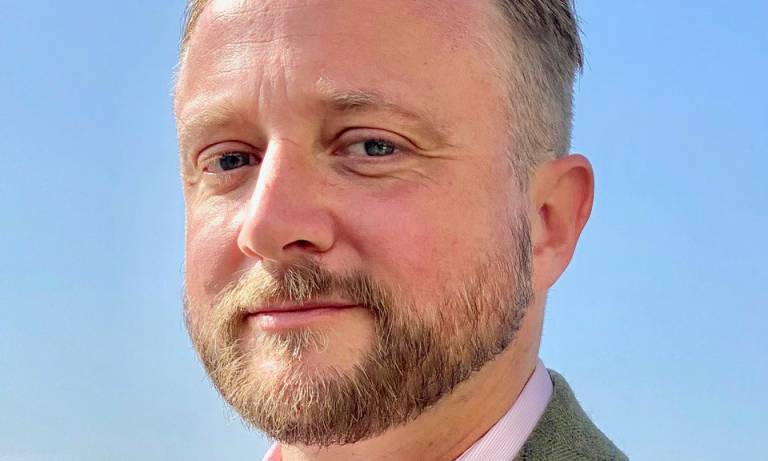 Edward Wild is a Professor of Neurology at UCL Queen Square Institute of Neurology, Associate Director of UCL Huntington’s Disease Centre, and a Consultant Neurologist at the National Hospital for Neurology and Neurosurgery. Since 2015 he's led a research team with a focus on developing new biomarkers to track the progression of Huntington’s disease, a lethal, inherited neurodegenerative disease, and testing new treatments for this devastating condition. He joined the LGBTQ+ steering group, in late 2020. Being new to the group he is so mostly in listening mode to figure out where we are and where we’re heading. The role is multifaceted, but its main aim to provide an amplified voice to the sections of UCL’s LGBTQ+ community who may need it.

What is the importance of Pride Month to the UCL community and what does it personally mean to you?

Pride is a celebration and a protest: it celebrates how far we’ve come in the fight for equality, and celebrates the diversity, creativity and general fabulousness of the LGBTQ+ community; and it’s an opportunity to take stock of what remains to be done and reflect on how we must work together to lift up those who remain marginalised or discriminated against. I went to medical school in the late nineties when Section 28 prevented “promotion of homosexuality”, gay people couldn’t marry or have civil partnerships, and there was no protection against homophobic discrimination at work. For me Pride month and Pride events were a chance to grab the attention of the world in general, through a colourful show of numbers and unity, to hold it to account for the unequal treatment of LGBTQ+ people in society. As much as anything this was about showcasing the fact that the doctors, police officers, firefighters, accountants and others upon whom society depends, had many gay and queer people among their numbers.

What motivated you to join UCL’s LGBTQ+ Steering Group?

When I was promoted to Professor in 2020 I looked back and reflected that I’d never knowingly been the victim of prejudice in my clinical or research career, despite having been open about my sexuality since qualifying in 2001.  Although I am gay, as a white cisgender man I have a lot of innate privilege that had probably benefited me along the way. I looked at the worldwide resurgence in discrimination against marginalised groups and the new language and politics that’s increasingly used to cloak this discrimination in a veneer of respectability – notably including academia – and resolved to use my promotion to try to support less privileged sections of the LGBTQ+ community, especially trans and BAME people, to try to help lift us all towards true equality. On a purely selfish level, trans people, black people (or members of other marginalised groups) should see UCL as a place where they will be welcomed for their unique qualities, ideas and talents, and if they are not, it is a  huge waste of smart people who could be helping us solve the problems we’ve chosen as our life’s work.

What are the aims of group for the next year?

The LESG has a number of standing functions like overseeing the Out@UCL staff network, the general promotion of positive attitudes to LGBTQ+ people at UCL, while advising the University on relevant matters and promoting best practice to support students and staff. One major initiative we’re undertaking at the moment is a formal research project aimed at collecting quantitative and qualitative data about the experiences of LBGTQ+ staff and students at UCL – not just numbers in each “group” but the extent and nature of discrimination they may have experienced and the extent to which they were supported. UCL has statutory duties to staff and students to create an atmosphere free from hate-speech, bullying and harassment, and a big part of accomplishing that is to first find out how we’re doing at the moment.

What can we do as a Faculty to support LGBTQ+ equity at UCL?

I think our Faculty is pretty diverse and supportive overall, but that diversity isn’t always visible, and the support isn’t always necessarily as active as it could be. I’m delighted that Carolyn McGettigan has been appointed as the Faculty EDI Lead and has set up a network of LGBTQ+ staff. Across the University, ‘intersectionality’ – a recognition that discrimination and support is seldom isolated to one characteristic – is increasingly becoming part of efforts to promote equality, notably the hugely successful Athena SWAN initiative. Personally, I would love to see more small acts of visibility in our everyday interactions.  I have a supply of spectacular Out@UCL lanyards which encompass the colours of the Progressive Pride flag, including black and brown stripes to represent marginalised LGBT communities of colour, along with the colours pink, light blue and white, which are used on the Transgender Pride Flag.  LGBTQ+ people and allies are welcome to email me (e.wild@ucl.ac.uk) to get one; and small acts like putting preferred pronouns in social media biographies or email signatures can go a long way to making it clear that one is an ally to others who may be struggling with their identity or against discrimination. There is, let us be clear, no world shortage of pronouns.

Young Ed was so scared of being visibly identifiable as gay that he had some quite judgemental attitudes about how gay and queer people should look and sound. I’d tell him that it doesn’t diminish a person if others who identify as having something in common with them appear or act differently; and that no one individual has the right to tell others how they should express their identity. There’s plenty of room for everyone, diversity is enriching and life is short – don’t waste it on negativity.