A philanthropic grant to UCL will support the establishment of a pioneering multi-arm multi-stage (MAMS) clinical trial platform to quickly assess potential protective therapies that may slow or stop Parkinson’s progression. 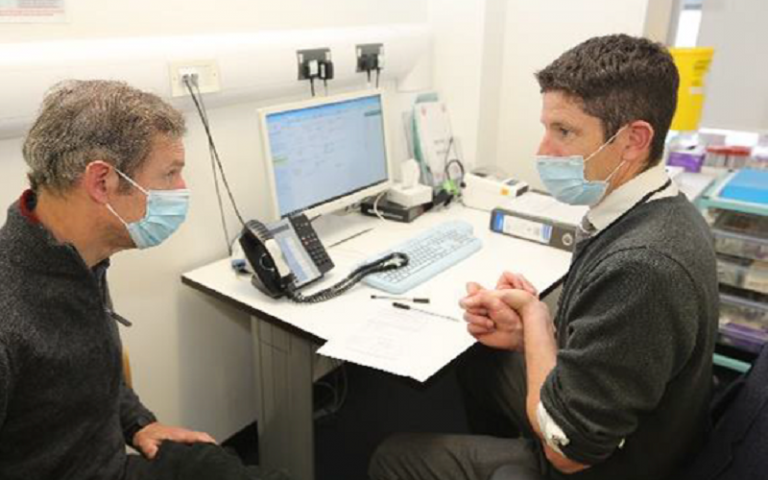 Parkinson’s disease is a progressive condition of brain degeneration resulting in tremors, stiffness and slowness of movement. Existing treatments can alleviate the symptoms, but do not alter the course of the disease.

The Accelerating Clinical Treatments for Parkinson’s Disease project – to be known as the Edmond J. Safra ACT-PD Initiative – will be co-led by Professors Thomas Foltynie and Sonia Gandhi at the UCL Movement Disorders Centre and Dr Camille Carroll from the University of Plymouth, and carried out in partnership with the Medical Research Council Clinical Trials Unit at UCL and leading Parkinson’s disease researchers from across the UK, people living with Parkinson’s and their care partners as well as major UK Parkinson’s charities.

The Edmond J. Safra ACT-PD Initiative will run until the end of 2023, during which period the project team will design the Edmond J. Safra PD MAMS Trial Platform. This innovative platform will subsequently be launched as a clinical trial of potential treatments that may slow or stop Parkinson's disease progression.

MAMS represents a new approach to clinical trial design which addresses inefficiencies in “conventional” trial models, allowing for multiple drugs to be tested simultaneously and a seamless transition from early to later stage clinical testing. Prospective therapeutics are rapidly eliminated and replaced at the early stage if they are shown not to be effective. Using this platform, 12 drugs can be initiated into a trial over five years – a process which would take 40 years and ten times as many patients using established protocols.

The MRC Clinical Trials Unit at UCL pioneered the MAMS approach to assess treatments for prostate cancer in 2005. To date, it has evaluated ten therapeutics and reported clinical practice-changing results. Earlier this year, the UCL Queen Square Institute of Neurology also adopted a MAMS platform for the OCTOPUS trial to identify treatments for progressive multiple sclerosis (MS) at up to three times the standard pace.

“We are delighted to embark on this project with the support of the Edmond J. Safra Foundation,” said Professor Thomas Foltynie, Professor of Neurology in the Department of Clinical and Movement Neurosciences at UCL. “Our existing process of ‘one drug at a time’ is far too inefficient, and it is high time that we had a platform capable of assessing multiple approaches simultaneously.”

“This project will revolutionise the way we perform clinical trials of potentially disease-modifying drugs for people with Parkinson’s.”

Dr Camille Carroll, Associate Professor and Honorary Consultant Neurologist at the University of Plymouth, and NIHR National Specialty Lead for Neurodegenerative Diseases said: “The funding provided by the Edmond J. Safra Foundation will enable a sea change in how we investigate therapies that could slow or stop Parkinson’s progression. We are very pleased to be partnering with colleagues at UCL to realise the vision of developing this trial platform for Parkinson’s.

“Supported by the National Institute of Health Research, with expertise in trial development and provision of trial delivery infrastructure across UK healthcare, the UK is the right place to deliver this ambitious, world-leading project, which we hope will herald the beginning of the end of Parkinson’s disease.”

“I am so incredibly proud to be able to offer our support to those undertaking visionary research at UCL and the University of Plymouth,” said Mrs Lily Safra, Chairwoman of the Edmond J. Safra Foundation. “I have witnessed first-hand the effects that Parkinson’s disease has on patients and their loved ones, and I feel great hope and excitement at the prospect of the Edmond J. Safra ACT-PD Initiative identifying the treatments which hold the promise of a brighter future.”

One of the most accomplished bankers of the 20th century, Edmond J. Safra was also a devoted philanthropist, generously supporting education, medical research and care, and Jewish religious life around the world throughout his lifetime. Under the chairmanship of his beloved wife Lily, the Edmond J. Safra Foundation faithfully continues this work in his memory.

The Edmond J. Safra Foundation has provided significant support for Parkinson's disease research and patient care at dozens of hospitals and institutes worldwide. At UCL, it previously funded the establishment of a new clinical research team within the UCL Movement Disorders Centre, contributing to a fully integrated platform of Parkinson’s disease and movement disorders studies. It also supported the activities of the Edmond J. Safra Chair of Functional Neurosurgery.

“The UCL Movement Disorders Centre is part of what makes UCL one of the most productive and highest-impact neuroscience centres in the world,” said Professor Alan Thompson, Dean of the Faculty of Brain Sciences at UCL. “This generous grant from the Edmond J. Safra Foundation highlights the critical role of philanthropy in enabling us to take the next step and build upon more than three decades spent at the frontiers of brain science and neurodegeneration.”

“Together with our partners at the University of Plymouth and a community of Parkinson’s expert clinicians and academics throughout the UK, this project can deliver benefits for Parkinson’s patients worldwide.”