Researchers from UCL Queen Square Institute of Neurology (IoN) have identified a cell pathway that impacts the ability of nerve cells to maintain their health and functionality, which could help develop treatments for motor neuron disease. 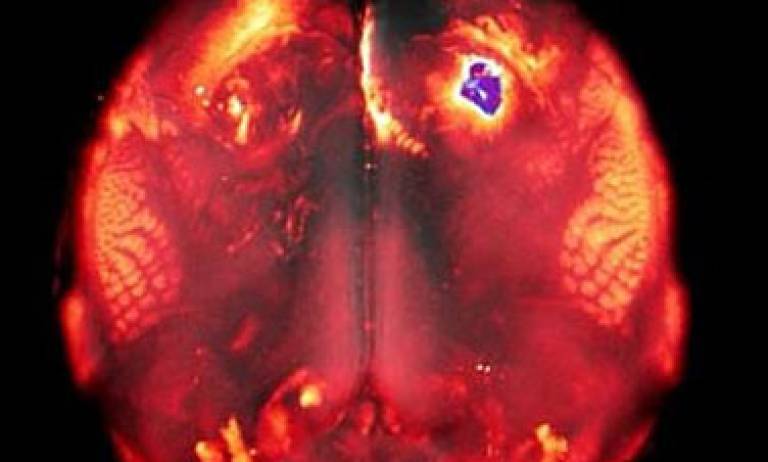 One of the causes of motor neuron disease is the disruption of a protein in the brain which results in the death of motor neurons, the nerve cells that control the function of our muscles.

The new research published in ScienceAdvances sheds light on the cellular mechanisms by which the disruption of this protein occurs.

The researchers examined a form of motor neuron disease called amyotrophic lateral sclerosis (ALS). ALS is a devastating condition for which there is no cure, and affects around two in every 100,000 people in the UK each year. There are about 5,000 people living with ALS in the UK at any one time.

A protein in the brain, known as FUS, regulates molecules that take our genetic code and translate it into proteins, which are known as RNAs. RNAs are essential actors for any cellular function. In ALS, FUS is displaced from the nucleus to the cytoplasm, where it forms droplets, like oil would do in water - a process called phase-separation. Crucially the researchers discovered that FUS traps other very important proteins in these droplets, and that the presence of these impacts on the neuron’s capability to translate RNAs into proteins, reducing the ability of motor neurons to maintain their health and functionality.

Lead author Dr Nicol Birsa said: “Understanding the cellular mechanisms underlying ALS is essential to design novel therapeutic approaches as well as identifying new targets to revert the pathological alterations. The identification of cellular pathways causing pathogenesis is the first step in the generation of new treatments and therapies.”

Dr Birsa said further investigation into this new finding is needed. “In ALS, the contacts between motor neurons and the muscle that they innervate - key to control muscle function - are lost before the neurons die. I want to investigate how the cellular alterations induced by FUS affect innervation, and whether modulating these can promote the stability and regeneration of the neuromuscular contacts.”

Many research groups are working very hard to improve our understanding of the disease, which is essential to find new treatments and improve the lives of people with ALS.