The 7-Tesla MAGNETOM Terra (7T) scanner at the Wellcome Centre for Human Neuroimaging, Queen Square, is enabling breakthrough research into the intricacies of the brain. 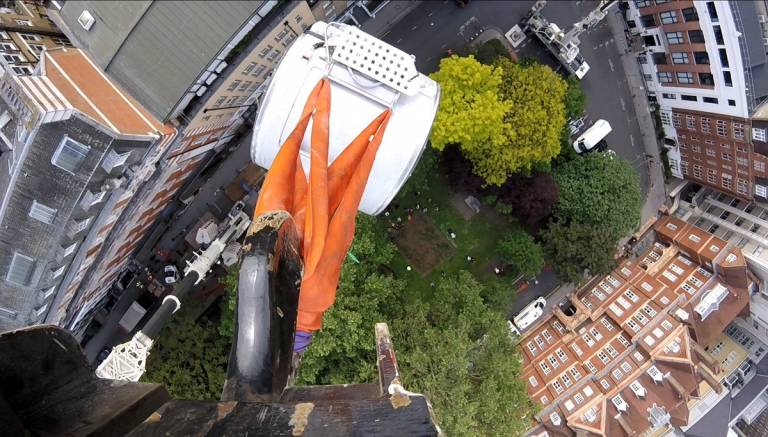 Dr Joost Haarsma, a Research Fellow in the Centre’s Visual Perception team, is using the scanner to explore communication between different layers of the cortex – the outermost layer of the brain, responsible for many higher-order brain functions such as sensation and perception.

“Your grey matter and your cortex is about two and a half millimetres thick. And that’s divided into roughly six layers,” he explains. “In order to look at those individual layers, and how they talk to each other, you need an even smaller resolution. This is what we get with 7T.”

The 7T scanner stands out because of the strength of its magnetic field. This dramatically increases the resolution of scanning images and reveals more intricate details about the structure of the brain.

Dr Haarsma’s research is primarily concerned with how the cortex allows us to see things. Specifically, things that aren’t actually there.

“The idea is that the brain has an expectation and these expectations are the brain’s best guess at what’s going to happen next. Now these guesses are often not correct, and when they’re not correct, they need to be corrected.

“If there is a new sensory input, which doesn’t match the expectation, then certain signals in the brain, called ‘prediction error signals’, will correct that expectation. And then hopefully, your best guess is going to be better next time and your perception is correct.”

It is particularly the deeper layers of the cortex that become activated by expectations. If hallucinations are a result of stronger expectations, then researchers should be able to observe increased activity in the deep cortex when people are hallucinating.

The powerful 7T scanner is needed to distinguish between distorted expectations and another possible culprit for hallucinations: the visual input system.

“You can only tease those things apart when you have a high enough resolution to look at the different layers.”

Dr Peter Kok, Principal Investigator of the Visual Perception Team, is also pleased with the results so far: “We’ve compared the kind of data we’ve been getting from these different scanners and as it stands it’s looking promising.”

“What’s also really crucial for that is the Physics team we have at the [Centre],” he said, “Because this magnet doesn’t do anything on its own. It all depends on programming it in the right way so that you get the right type of data out of it. And that’s what the Physics team is really good at. So we’ve been working with the Physics team and optimising the data collection.”

Joining forces with other groups across the Centre and the wider UCL community has also been one of the highlights for Physics team leader Professor Callaghan.

“What I absolutely love about it is the attitude people have. The people who are most active in the area are just really excellent to collaborate with. They want to do new things and they’re always coming to us with new challenges. I would say that’s invigorating.