The new diagnosis-support tool provided by the ASPIRE consortium could lead to earlier dementia diagnosis and prognosis in pharmaceutical studies and clinical practice by facilitating brain perfusion imaging by MRI. 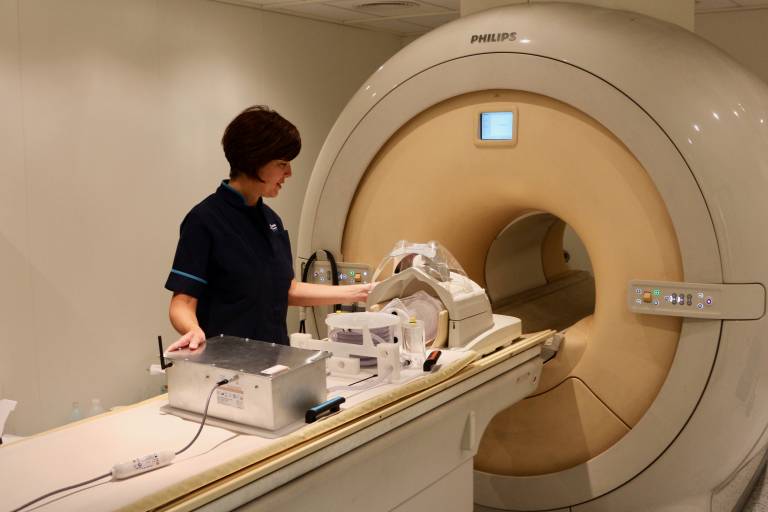 A consortium – ASPIRE (Arterial spin labelling Scanner- and Patient-Independent Robust Evaluation) – based on a technology led by Gold Standard Phantoms Limited, a UCL Spinout company, has been awarded a grant from the European Union Horizon 2020 Framework Programme to launch into mainstream practice.

UCL Queen Square Institute of Neurology and CEO of Gold Standard Phantoms, Professor Xavier Golay, said: “The measurement of blood flow using MRI has been available for years, yet is still not use today. The UCL Spinout, Gold Standard Phantoms, was launched six years ago to do exactly this; create reference objects to help revolutionise MRI by making it quantitative and more reproducible.”

Professor Golay explained to establish the diagnosis of dementia – such as Alzheimer’s disease – and the effect of medication on prognosis doctors and pharmacists rely on imaging biomarkers.

“Early signs of dementia seem to be linked to change in how the brain uses glucose for its energy demands, which is directly linked to changes in blood flow pattern, possibly appearing earlier than the measurable loss of neurons appearing as a reduction in the volume of grey matter. Also, the changes in perfusion, as well as its position within the brain, allows differentiating between different types of dementia.

“As such, this project would allow to provide earlier diagnosis and or prognosis of a patient with dementia, as well as improve the use of the technology by combining automatic analysis of MRI images with the use of a reference object which would streamline the diagnosis process.”

Arterial spin labelling is a MRI measure and potential biomarker that can accurately measure brain blood flow, also known as perfusion, without the administration of contrast agents. As a result, this technique is entirely harmless to patients and can be repeated as often as necessary, offering patients an earlier diagnosis.

The only available method that is currently recognised and approved to measure subtle changes in energy is using a PET scan. Because of its costs and the lack of availability outside of specialised centres, this is either not done at all, or when it is performed, it requires the patient to set up a second appointment to have a separate exam which involves the patient getting a dose of radioactive sugar injected in them.

“If this method makes it into clinical practice, it will help every patient getting an MRI having their brain perfusion measured at the same time, at the cost of only a few additional minutes, without the need to reschedule an appointment. That is time saved, and money saved for the NHS, this with the addition of new information allowing to improve the patient’s diagnosis,” said Professor Golay.

This new technique could also lead to the development of much more effective drugs as it can be used to demonstrate whether blood flow improves with new drugs developed to alter the course of the disease.

All partners bring their specific scientific excellence into the project. Gold Standard Phantoms has developed a unique MRI phantom QASPER, which simulates the blood circulation and perfusion in the brain, and will be using it for standardisation of the imaging methods. Amsterdam UMC leads the development of the advanced ASL analysis software ExploreASL, which is already widely applied to quantify brain perfusion in 10,000 brain scans in more than 30 studies worldwide. MEDIRI provides the cloud-based medical image platform mTRIAL, serving secure image upload, pseudonymisation, and processing in current multi-centre clinical trials.