Dennis Chan is a clinician scientist at the UCL Institute of Cognitive Neuroscience whose research focuses on the development of new tests for diagnosing earliest stage Alzheimer’s disease. 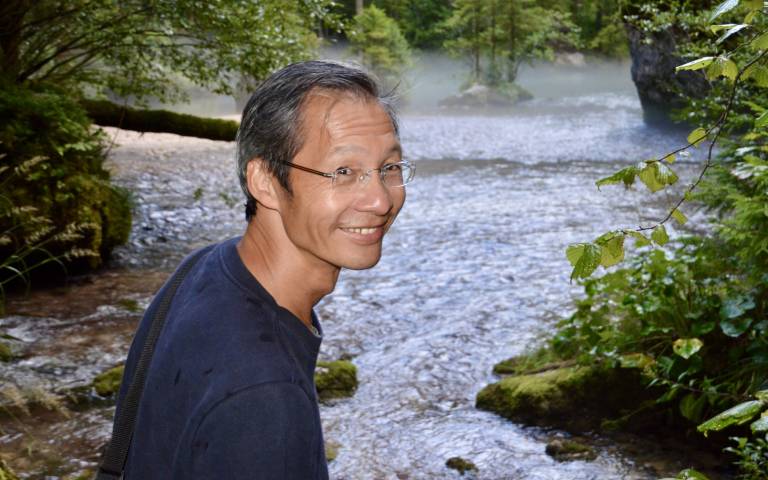 We caught up with Dr Chan to ask him about his research, what excites him most about his work and what advice he would give his younger self.

What attracted you to the area of neurodegenerative disease and why is it important?

My PhD was in hippocampal neurobiology and I was lucky enough to work with one of the world’s leading hippocampal scientists, John O’Keefe.

The hippocampus is one of the brain regions first affected in Alzheimer's disease, and it seemed to me that there would be great value, both for basic as well as clinical science, in determining whether our highly sophisticated understanding of hippocampal function, based on studies of single cell physiology, could be used to develop better tests for detecting Alzheimer's in its earliest stages. Early detection is crucial, since this would allow application of drugs and other interventions that might be able to delay or even prevent the onset of dementia. At present our tools for early diagnosis are imperfect.

For many years I have been working with UCL hippocampal scientists, most notably John O’Keefe and Neil Burgess, with the aim of developing spatial tests for probing entorhinal-hippocampal function in humans that are based on animal cellular work.

We have shown that VR navigation tasks are superior to current gold standard cognitive tests in diagnosing patients with mild cognitive impairment due to Alzheimer's disease. We are now testing whether our VR tasks can detect Alzheimer's even earlier, prior to symptom onset.

This interest in tech and early diagnosis means that I am also heavily involved in a national initiative to develop digital tools for detecting early Alzheimer's disease, using wearable tech (eg smartphone and smartwatches) to acquire data on multiple aspects of everyday behaviour and function and then feeding into AI systems to extract diagnostic signal. More recently I have been involved in studying cognitive impairment in long Covid. There are links between Covid and Alzheimer's; there is evidence that the neurotropic SARS-CoV-2 may preferentially affect the hippocampal formation, and there are concerns that CV19 may increase risk of future Alzheimer's.

It is vastly rewarding and enjoyable to work with world-class scientists in a number of different fields. It is very exciting to think about ways to apply the insights gained from cutting edge neuroscience to Alzheimer's, and the opportunity to work in this space is a rare privilege for a jobbing clinician like me.

Same goes for the technological revolution taking place right now; wearable tech and AI will be transformative for the diagnosis and management of Alzheimer's disease and it is a huge pleasure to collaborate with computer scientists in ushering in this new era.

What would you say to someone who is considering whether to study cognitive neuroscience at UCL?

The UCL neuroscience community is by some distance the biggest in the UK and one of the biggest and best in the world. This gives undergraduate students an enviable range of options when it comes to taught courses and research modules, while postgraduates have the opportunity to research in world-leading labs. Outside of formal study, the huge number of lectures and symposia and the interdisciplinarity of the research community foster intellectual growth and encourage creative thinking.

OK DC junior, listen up. One, always stick to first principles. Two, never just accept what you read or what you are told, especially in medicine, always question. Three, don’t ever make the mistake of thinking you know anything, you don’t. The more you learn, the more you realise the extent of your ignorance. But that is OK; it is the path to wisdom. Four, focus on the big issues that make a difference. And finally, only do things that are fun.

Dr Dennis Chan undertook a PhD (1991) in neurobiology in the lab of John O’Keefe at UCL, before completing his medical degree at the University of Cambridge (1993).

After junior medical training he undertook a further research doctorate at the UCL Dementia Research Centre, studying under Martin Rossor and Nick Fox, before accrediting as a consultant neurologist in 2005. He worked at Brighton and Sussex Medical School, then the University of Cambridge, before moving back to UCL.

Translating cellular studies of entorhinal cortex and hippocampal function to clinical practice, Dennis has successfully used app- and VR-based navigation tasks to detect pre-dementia AD. He is also a research lead for a new initiative exploring the use of wearable tech and AI as digital tools for detecting early AD.