Tardigrades are microscopic creatures that have managed to survive on this Earth for over 600 million years. They have survived extremes of heat and cold and also have the ability to dry out and come back to life. For this reason, they are being studied by scientists. Their unique abilities could be used to preserve other biological materials, such as blood cells in blood banks or towards engineering crops that can resist extreme temperatures. 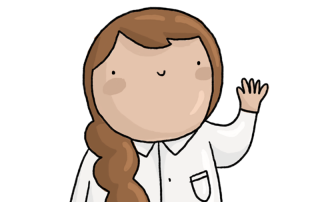 I graduated from UCL in 2016 with a degree and masters in Cell Biology.  I'm super interested in research and brain development. Therefore, I decided to do a PhD in Developmental Neurobiology with Professor  Stephen Price where I study the question of how brain cells know where to go and set up neural circuits when an embryonic brain is growing.   I hope to obtain a post-doctoral position in academia or industry where I can do more research and hopefully lead my own group someday, although I’m going to keep an open mind to other opportunities too!   My hobby is illustrating and I drew the images in this project.

The problem of preserving sensitive biological materials (be that cells, living tissue or even vaccines) for long periods of time is a massive one and scientists all over the world are trying to figure out alternative solutions. In 2017, Dr Thomas Boothby and colleagues at the university of North Carolina conducted a study on tardigrades and their ability to survive extreme heat to try and solve the problem. In the video below, you’ll learn the molecular biology and experimental designs Boothby and colleagues used and designed to figure out the exact protein tardigrades use as a cryoprotectant to survive those extreme conditions and how they applied that mechanism to other sensitive biological molecules and systems.

A short video on Tardigrades

By the end of this video you should have learnt: I was always that kid that was outside collecting things, but I don’t think I met a “real scientist” until high school. In high school, I worked for one of my professors collecting bats at night (one of the best jobs I’ve ever had). But what really got me hooked was taking cell and developmental biology courses. Along with being interesting, cells and embryos are just really visually stunning.

Reading around a subject is a requirement that most lecturers expect of their students at university. Below are some resources you can use to dive deeper into the topic and strengthen your own understanding. Don’t worry if they don’t all make sense to you; this is all still very much university-level stuff, and a few are professional scientist level! Your only job here is to just give it your best go and gain a better personal insight into what your own university experience might entail in the future, as well as part of what it means to be a scientist!   I have included my own guide to reading a research paper.

Key words in this web page

A substance that prevents the damage to cells during freezing

The removal of moisture from something.  In science, this refers to the drying out of a living organism.  Scientists frequently study and assess various organisms' susceptibility to desiccation

Also known as genome editing, is a group of technologies that give scientists the ability to change the organism's DNA.  These technologies allow genetic material to be added, removed or altered at particular locations in the genome.