The public economy: Understanding government as a producer

A reformation of public economies 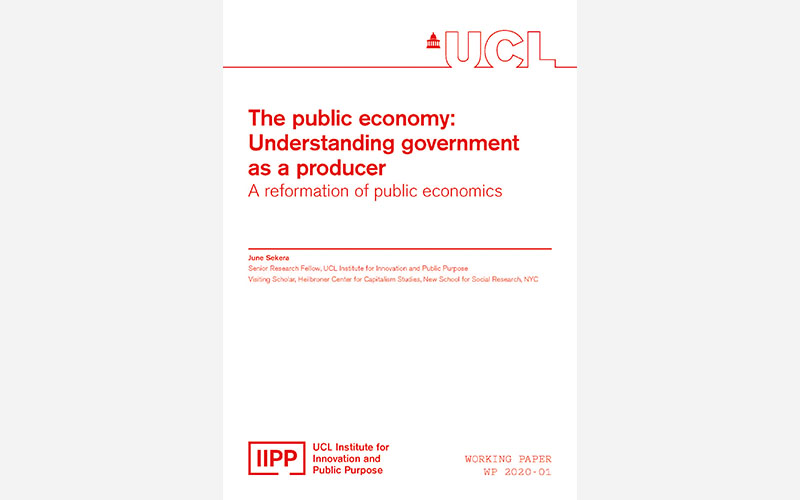 In mainstream economics scripting, government is either bumbler or villain. Cast as market fixer, intervenor, enforcer or redistributor, the state cannot but act inefficiently or, worse, illegitimately. Public goods and collective action are called ‘problems’, the commons a ‘tragedy’. Even today’s so-called ‘public economics’, as represented by the ‘public choice’ school, is decidedly anti-public. It was not always thus. More than a century ago, economists theorised the state as a framework of collective agency for public purpose and understood government as a producer meeting collective needs. A cogent concept of ‘the public economy’ guided this nascent field of public economics, long since lost to historic upheavals and repression by proponents of market-centric rational choice theory.

This paper rejects today’s orthodoxy and the artful, but artificial, construct that subverts the ability of the public economic system to produce on behalf of the polity. I call, instead, for a new public economics that returns to lost roots, while breaking new ground by taking into account the biophysical imperatives of production. The model offered here takes a systems perspective (as did Quesnay and early 18th-century physiocrats); recognises a public economy with distinctive purpose and drivers (as did the German public economics theorist, Gerhard Colm, in the 1920s); and focuses on government as a producer (as did Paul Studenski in the 1930s to 1950s). Finally, it draws on two centuries of physics and 21st- century systems ecology in recognising biophysical imperatives inherent to production. Developing and promoting a cogent theory of the public economy system is vital to the effective operation and, ultimately, survival of the governmental systems by which democratic nation-states function today. The simplistic typecasting of government, the ‘market-failure’ rationalisation for state action, the invalid imposition of market axioms and assumptions on the public domain, and the disregard of public purpose must all be rejected. It is time for a reformation of public economics.