UCL IIPP and the Scottish Government hosted an all-female panel at COP27, moderated by Mariana Mazzucato, which called for better quality financing for climate and health – particularly in the Global South – a need the panellists described as “globally urgent”. 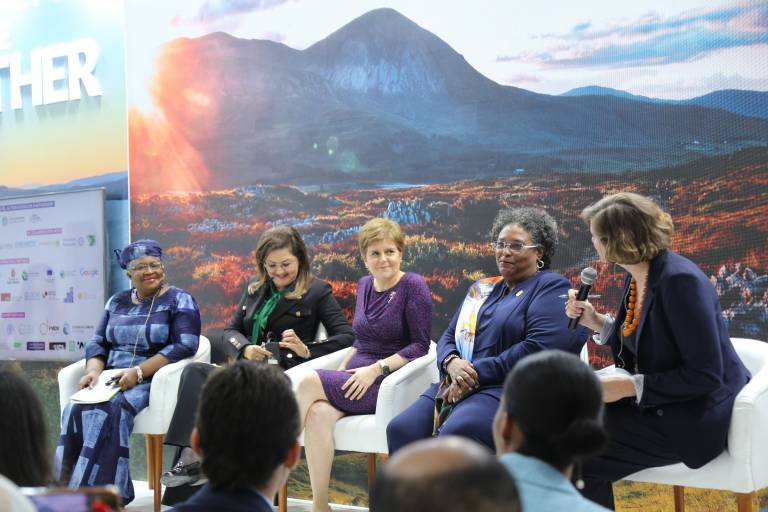 The UCL Institute for Innovation and Public Purpose (IIPP), together with the Scottish Government, hosted a ground-breaking all-female panel at COP27. The panel, moderated by Mariana Mazzucato, Professor in the Economics of Innovation and Public Value at UCL and Founding Director of IIPP, called for more fiscal space – particularly in the Global South – and better quality financing for climate and health – a need the panellists described as “globally urgent”.

The panel comprised Mia Amor Mottley, Prime Minister of Barbados, Hala El Said, Minister of Planning and Economic Development for Egypt, Ngozi Okonjo-Iweala, Director-General of the World Trade Organization and Nicola Sturgeon, First Minister of Scotland. Entitled ‘When will leaders lead?: Creating fiscal space and directed finance for climate and health goals’, the discussion was co-hosted by IIPP and the Government of Scotland in the Multilevel Action Pavilion in the Blue Zone of the COP27 site in Sharm-El-Sheikh, Egypt, on Monday 7th November 2022.

At COP26, Prime Minister Mottley called on ‘leaders to lead’ in financing an equitable green transition. One year later, investment still falls short of what is needed to limit catastrophic global warming. It is for this reason that the panellists set out to reflect on, and envision, a radical redesign of the global financial architecture. To fundamentally shift financial flows, states must mobilise, direct, and shape finance to align with climate and health goals. Tackling ongoing climate and health crises requires not just more, but better finance.

Prime Minister Mottley gave a powerful keynote address. She said it is “fundamentally unfair” that countries that have not caused the crisis are bearing the brunt of most climate disasters. Many of these countries – largely in the Global South – have insufficient fiscal space to pursue decarbonisation and adaption agendas. They already have significant debt overhangs and consequently struggle to recover from, and build resilience against, extreme weather events.

Panellists discussed several ways that such disparities can be overcome. Director-General Okonjo-Iweala emphasised the importance of bringing trade cooperation into alignment with climate cooperation. First Minister Sturgeon and Minister El Said underscored the importance not only of getting cooperation between states right, but also of ensuring that public-private cooperation is designed with climate goals front and centre. First Minister Sturgeon pointed to the example of the mission-oriented Scottish National Investment Bank – which Professor Mazzucato and IIPP helped to set up – and ScotWind. Prime Minister Mottley also called for investments in green industrial strategies to promote production and deployment of climate technologies in the Global South – highlighting how dependence on COVID-19 vaccines and ventilators from the Global North jeopardised pandemic preparedness in many regions.

The panellists agreed that on top of bridging the existing finance gap, there is a need for a much bolder approach – from the public and private sectors – to design financial institutions, partnerships and policies capable of realising a just green transition. The challenges are urgent. If states fail to take the lead on climate finance, a just green transition will remain out of reach.

“It was an honour to moderate an all-star panel at COP27 with Mia Amor Mottley, Prime Minister of Barbados, Hala El Said, Minister of Planning and Economic Development for Egypt, Ngozi Okonjo-Iweala, Director-General of the World Trade Organization and Nicola Sturgeon, First Minister of Scotland. This panel underlined the need to open fiscal space for a just green transition - especially for countries exposed to the harshest impacts of climate change. It also highlighted that the type of finance and the type of partnerships matter. We face not only a financing gap but also a huge gap in thinking about how to structure that finance - with the right institutional design, policies and conditions to achieve our underlying goals”, says Professor Mazzucato.

"Trade will be critical to the global response to climate change – providing worldwide access at scale and speed to the critical technologies and services needed for greenhouse gas mitigation and adaptation. You can have all the finances in the world, but if the trade policies are not right, you will not get anywhere. Our message today, a unified message, is that we need an invigorated partnership of trade and new strategies of finance to deliver the world community's commitment. Indeed, trade and finance must go hand in hand," says Director-General Okonjo-Iweala.

IIPP has released a statement for COP27 calling on states to take the lead in mobilising finance to avoid catastrophic global warming. More details, the full statement and supporting research is available on our Green economy webpage.

View more images of the event on our Flickr gallery.