The Council on Urban Initiatives co-hosted a Special Session, Shaping Equitable Urban Futures, at the World Urban Forum in Katowice, Poland on 29 June. Chaired by Mariana Mazzucato and Ricky Burdett, this session explored examples of cities developing critical transformations ‘on the ground’ that could deliver more equitable futures, with a particular focus on public value and quality design of the built environment.

The panel spoke to how cities are now at the forefront of multiple and intersecting crises: climate change, pandemics, forced migration, systemic inequality and financialization, to name a few. When these crises culminate and reach a tipping point, city leaders must use them as an opportunity to make fundamental shifts that improve the lives of urban residents. This was emphasized by the chairs, who also stressed the importance of drawing lessons from cities and local initiatives that have already been successful in promoting such innovations.

The first example was provided by Diana Rodriguez, Secretary for Woman’s Affairs for the City of Bogotá who spoke of care as a gendered issue with 30% of women in the city devoting an average of 10 hours per day to caring activities, leading to time poverty, lack of financial autonomy and health issues. Bogotá’s Sistema de Cuidados (care system) is an integrated response to the unequal burden of care faced by women, by providing education, wellbeing activities, care support, cultural transformation programmes, and fundamentally, a plan to redesign the built environment around ‘care blocks’, placing caregivers at the centre of urban design. In turn, Chan Heng Chee commented on the importance of securing sustainable financing mechanisms to institutionalise the system beyond short term political cycles, and Richard Sennett noted the cultural importance of framing services such as these as a right to urban residents, breaking with past conceptions of welfare as an act of generosity.

This was followed a discussion on urban planning in the context of uncertainty and flux with presentations by Fatma Şahin, Mayor of Gaziantep, Turkey and Yvonne Aki-Sawyerr, Mayor of Freetown, Sierra Leone. Şahin drew parallels between the conflicts and in Syria and Ukraine, and their effects on regional displacement and migration, which, in the case of Gaziantep, had resulted in the city receiving over 450,000 Syrian refugees. She stressed the need to adopt social justice as key tenant, ensuring that refugees have access to public services alongside education and employment. Aki-Sawyer outlined the financial context in her city, which has attempted to bolster its tax revenues stressing while this had resulted in significant progress, the city still faced considerable financial challenges in ensuring truly equitable public service provision. She highlighted the complexity and fragility associated with operating in and against poverty, confounded by limited municipal autonomy within a highly centralised state.

Lastly, Javier Burón, Housing Manager for the City of Barcelona, spoke about the city's efforts to reorient the housing market to deliver public value and the challenges associated with solving complex issues that extend beyond metropolitan jurisdictions. He stressed the need for reliable data and explained how the city had progressed in the measurement of public and private land stock. Mazzucato, in turn, praised the City’s efforts as market shaper, while Leilani Farha commented that she regarded this as an example of human rights in action and asked about the city’s prevention against predatory actors to which Burón spoke of the importance of zoning, imposing standards and regulations on the market. He concluded by emphasising the City’s attempt to attract long-term core investment funds that want to join forces with the public sector.

During the session, the Council on Urban Initiatives also launched the first in a series of Case Study Reports featuring both Bogotá’s Care System and Gaziantep’s urban response to refugee integration. 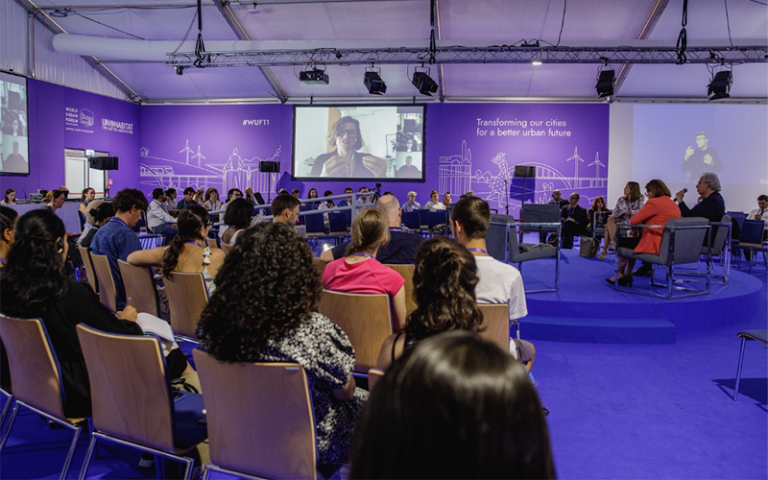 About the Council on Urban Initiatives:

The Council on Urban Initiatives was established in November of 2021 as a partnership between UN-Habitat, UCL’s Institute for Innovation and Public Purpose (IIPP), and LSE Cities. Co-chaired by Mariana Mazzucato, Director of UCL IIPP and Ricky Burdett, Director of LSE Cities, the Council brings together an international group of eighteen pioneering mayors, practitioners, activists and academics. The Council advocates for the power of cities to promote systemic change to achieve the goal of the green, just, and healthy city.