Creating public value on the high street: A mission-led vision for the future

Public value needs to be at the heart of London’s high streets as they adapt and diversify for the next decade, according to a new Mayor of London report influenced by IIPP Director, Professor Mariana Mazzucato. This week the Mayor of London Sadiq Khan released a new report called The High Streets - Adaptive Strategies as part of his Good Growth by Design programme.

The research-led report, offered guidance on how London can create a “mission-oriented approach” when it comes to developing its high streets for current and future generations.

The report took a broad and inclusive view of the high street, rather than just looking at store closures and the retail element of a high street. The report highlighted the need to examine the full high street ecosystem: how it provides economic value, commercial value, social and environmental value.

Professor Mazzucato’s work on mission-oriented innovation policy, spearheaded here at IIPP, acted as the thought-starter for the report, which was co-written with IIPP Head of Green Economy and Sustainable Growth Martha McPherson. Mazzucato outlines ‘missions’ as bold and ambitious commitments from governments (at state and local level) to stimulate cross-sectoral, bottom-up innovation to meet specific place-based environmental, social or economic challenges. Through this lens, a shop front on the high street wouldn’t just exist for the sake of it, instead there could be “conditions of occupancy put in place for high street stakeholders to design the transformation of any given high street, in recognition of their role in the economy".

“Taking on missions could make for a high street which has public value creation at its heart, and specific missions – such as carbon reduction aims, or inclusive growth aims – agreed by local people as its adaptive strategy. Understanding how to involve citizens both in the formation of missions and in public value planning and implementation, is key to making both citizens, and their high streets, more resilient and radical,” Mazzucato said in the report. 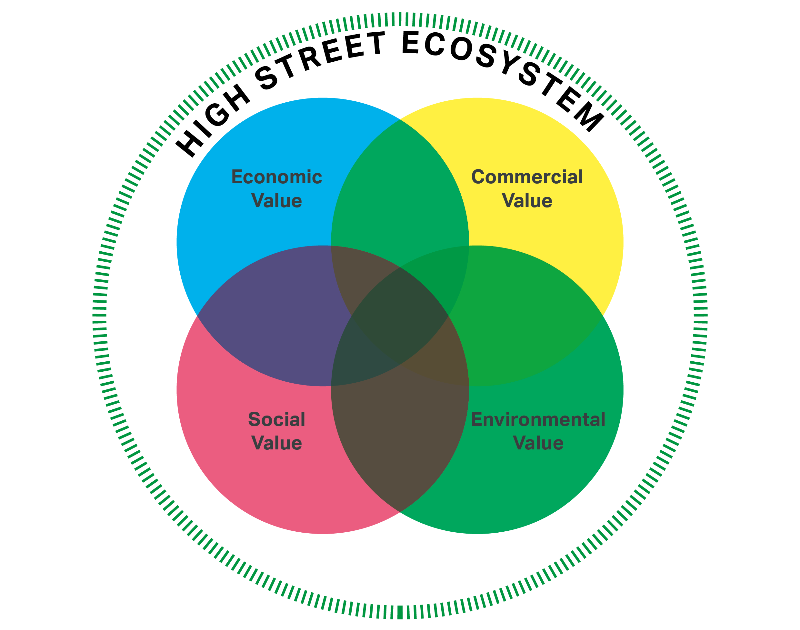 The report also went on to showcase case studies from across London boroughs where innovative-led approaches and exciting strategies (like those suggested in the guidance) are already being put in place to support the renewal of the high street. An example of this is Church Street, where an ambitious regeneration plan has been started by Westminster City Council and will take place over the next 15-20 years. Here the focus is on retaining the community value through the transition. So in 2015, the council set up a Regeneration Base in a former shop and started a 'Vacant possession tracker' which gave them an interactive record of their high street shop occupancy so the council could better understand the social and financial value businesses provide and encourage a proactive and innovative curation of commercial units.

The report also featured thought starter suggestions from another member of the IIPP family, visiting professor and designer Dan Hill, who also pushed for mission-oriented innovation. Hill recommended the need to think seriously about the future of e-commerce and the challenge posed by new technology.

“One thing is clear: we cannot use the old tools to approach an entirely new challenge. The traditional methods of architecture, planning and urban design cannot move at the speed of Amazon, AI, or autonomous shuttles – or Extinction Rebellion, for that matter. We need to find new modes of engagement, and a richer array of toolkits and practices, to address the high street: prototypes, actions, acupunctures, all framed by a continual inquisitive reflection on “what the high street is for”, ”said Hill.