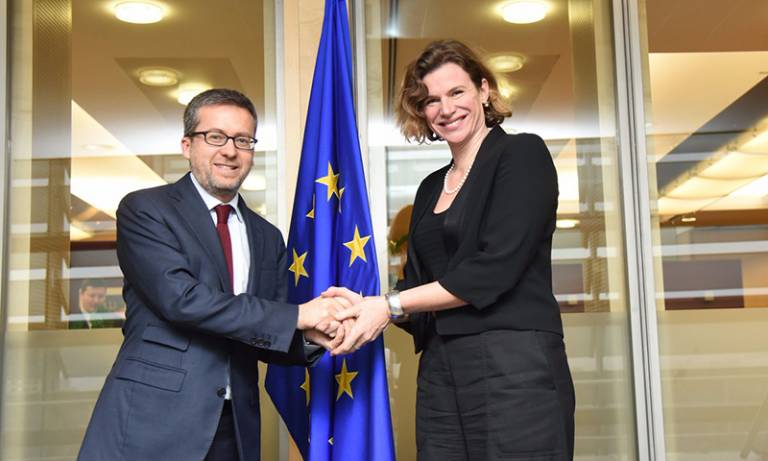 From 1 January 2018, IIPP Director Professor Mariana Mazzucato will become the Special Advisor on Mission Driven Science andInnovation to EU Commissioner for Research, Science and Innovation, Carlos Moedas. Her role is to help shape the Framework 9 programme so that it is more mission-oriented—transforming societal challenges (from climate change to care issues) into concrete problems that multiple sectors and different types of public and private actors can work together to solve.

Carlos Moedas has previously spoken of his admiration for Mazzucato’s approach to the role of national governments. In December 2016, he stated: “I believe that, in innovation and research, the role of the Member States and the Union are essential. It is a very good example where the role of the public sector should not only be to tackle a market failure but also to set directions. As Mariana Mazzucato says: Innovation-led growth is not just about fixing a market failure but also about setting direction and creating new markets. If you just tackle the market failure you can head into the wrong direction.”

In December 2017, Professor Mazzucato, was invited to give a lunch keynote to the Council on “mission-oriented” policy across Europe. Her IIPP working paper on Mission Oriented Innovation: Challenges and Opportunities was circulated to all ministers beforehand, and she fielded questions for 40 minutes afterwards. The meeting was hosted and chaired by Mailis Reps, Estonian Minister of Education and Research and representative of the Estonian Presidency of the European Council. Mazzucato was introduced by Moedas, and around the table were 28 Ministers (listed below) including Jo Johnson, UK Minister of State for Universities and Science and the Director General Economic Affairs and Competitiveness of the General Secretariat of the Council, Carsten Pillath.

After the event, Moedas tweeted his thanks to Mazzucato: “Thank you @MazzucatoM for having accepted to be EU Special Advisor for Mission Driven Science and Innovation. The link between citizen and science is crucial. So it is fantastic to count on the “mother” of the concept of “missions” to help us. Europe counts on you.”

Professor Mazzucato’s work on mission oriented innovation policies was cited in the UK’s first industrial strategy, published in November 2017, and she is currently working with Rt Hon Greg Clarke MP, UK Secretary of State for Business Energy and Industrial Strategy, on ways to transform challenges into missions.

Mazzucato is also a founding member of the European Commission expert group on Economic and Societal Impact of Research and Innovation (ESIR). On October 3, 2017, Mazzucato hosted the first meeting of ESIR at UCL's Institute for Innovation and Public Purpose.

In preparation for the Council meeting, the delegates received introductory comments from Professor Mazzucato about her talk:

“Many countries across the globe are pursuing growth policies that seek to be smarter, more inclusive and more sustainable. My intervention will argue that the types of long-run strategic investments which such growth requires, means public policy must be justified, nurtured and evaluated in a different way. Instead of policies being motivated purely in terms of ‘fixing’ market failures and/or ‘system failures, policies can be justified and measured in terms of their ability to create and shape markets—with markets as outcomes of the interaction between public, private and third sector actors. A market shaping process can benefit from understanding the lessons from the ‘mission oriented’ investments of the past aimed at technological and societal challenges—from putting a man on the moon—to those that are today tackling climate change. The talk will reflect on key questions which arise from mission oriented innovation: (1) how to envision the direction of change, tilting rather than levelling the playing field; (2) how to create public organizations that can welcome the underlying uncertainty and discovery process; (3) how to evaluate dynamic mission-oriented and market creation policies; and (4) concrete ways in which public and private can share both the risks and rewards underlying the innovation process—so that ‘smart’ innovation-led growth can also produce ‘inclusive’ growth.”

Attendees at the Competitiveness Council where Mazzucato gave a keynote talk  included: 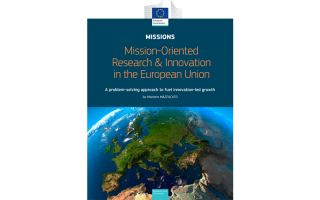 Mission-oriented research and innovation could tackle plastic in seas, dirty cities and dementia. 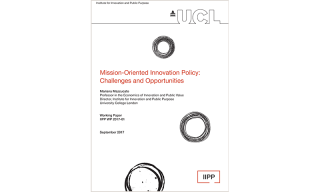 Mission-oriented policy lay behind some of the biggest innovative leaps forward of the last century and can offer the transformative approach needed today.

IIPP's work on mission-oriented innovation policy is shaping global discussions about what a modern industrial strategy should look like.