Gabriella Gómez-Mont is a Visiting Professor of Practice & Senior Policy Fellow at the UCL Institute for Innovation and Public Purpose (IIPP). 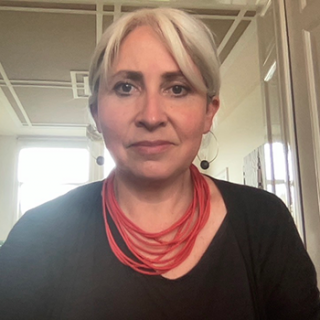 Gabriella Gómez-Mont is the founder and CEO of Experimentalista, a novel type of nomadic and creative office specialized in cities – and that constantly shifts shape to accommodate high-level, transdisciplinary collaborations across the world.

She was also the Chief Creative Officer of Mexico City, and the founder of Laboratorio para la Ciudad (2013 – 2018), the award-winning experimental arm and creative think-tank of the Mexico City government, reporting to the Mayor. As director of the Lab she headed a highly transdiciplinary team: from urban geographers, political scientists and civic tech experts, to artists, historians and philosophers. The Lab was created to tackle urban challenges – from experiments in democracy and mobility to projects related to spatial justice, play as a city making tool; new models of dynamic governance and civic tech platforms etc – creating novel transdisciplinary methodologies and participatory practices, exploring ways to find common ground in a gargantuan, diverse (and often divided) city. Hence the Lab’s projects were multiple, often paradigmatic and covered widely in international publications.

Besides her fascination with all things city, Gabriella ihas been a journalist, visual artist, and director of documentary films, as well as a creative advisor to several universities and companies. She has received several international recognitions for her work in different fields, such as the first prize in the Audi Urban Future Award, the Best Art Practice Award given by the Italian government, The Creative Bureaucrats Award by the city of Berlin, and the TED City 2.0 Prize, among others. She was also named one of the 100 most creative people in business by Fast Company magazine. Gabriella is a Yale World Fellow, TED Senior Fellow, MIT Director´s Fellow, Georgetown University Visiting Fellow, Canadian Urban Institute Senior Fellow, Institute for the Future Fellow, a Salzburg Seminar Fellow, a Fabrica Alumni and a World Cities Summit Young Leader.