Ecosystems and competition law in theory and practice 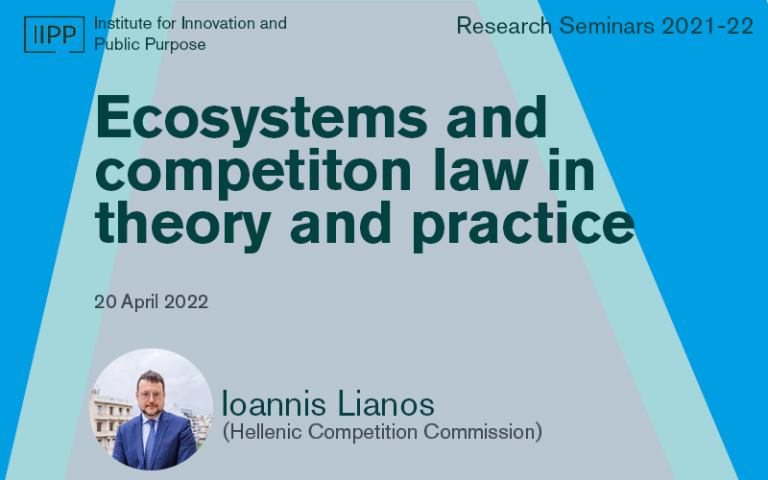 Join us to hear Ioannis Lianos talk about his recent paper 'Ecosystems and competition law in theory and practice'. This talk will be chaired by IIPP’s Antonio Andreoni with a discussion from Simon Roberts, IIPP Visiting Prof. Followed by questions from the audience.

This seminar will explore Ioannis Lianos' recent paper on 'Ecosystems and Competition Law in Theory and Practice'.

One of the most profound changes in the industrial landscape in the last decade has been the growth of business ecosystems—groups of connected firms, drawing on (digital) platforms that leverage their complementors and lock in their customers, exploiting the “bottlenecks” that emerge in new industry architectures. This has created new asymmetries of power, where the “field” of competition is not the relevant product market, as is usually the case in competition law, but rather the ecosystem of various complementary products and associated complementor firms. These dynamics raise novel concerns over competition. After examining the foundational elements of the ecosystem concept, we review how ecosystems are addressed within the current scope of competition law and identify the gap in the existing framework of conventional competition law. We then move to a critical review of current efforts and proposals in the European Union for providing regulatory remedies for ex ante and ex post resolution of problems, focusing on the proposals of the Digital Market Act on ex ante regulation, with its particular focus on “gatekeepers.” We also review recent regulatory initiatives in European countries that focus on ex post regulation and on the role of business models and ecosystem architectures in regulation before providing a deep dive into proposed Greek legislation that explicitly focuses on ecosystem regulation. We conclude with our observations on the challenges in instituting and implementing a regulatory framework for ecosystems, drawing on research and our own engagement in the regulatory process.

Ioannis Lianos is Professor, Chair of Global Competition Law and Public Policy and founding Director of the Centre for Law, Economics and Society at the Faculty of Laws, University College London. He has published extensively books and articles in various languages and leading academic journals. His most recent publications include Global Food Value Chains and Competition Law (CUP, 2022), Competition Law (OUP, 2019), Regulating Blockchain: Techno-Social and Legal Challenges (OUP, 2019), Reconciling Efficiency and Equity A Global Challenge for Competition Policy (CUP, 2019), Brands, Competition and IP Law (CUP, 2015), Damages Actions for Competition Law Infringements (OUP, 2015), Competition and the State (SUP, 2014), the two volumes Handbook in European Competition Law (Edward Elgar, 2013), Competition Law and Development (SUP, 2013). Lianos was previously Gutenberg Research Chair at France’s Ecole Nationale d’Administration, Vincent Wright chair at Sciences Po (Paris), Academic Director of the BRICS Competition Law and Policy Centre, Higher School of Economics, an Alexander von Humboldt fellow at WZB Berlin, an Emile Noel fellow at NYU law School, a visiting professor at the Universities of Chile in Santiago, the University of Strasbourg, among others, and has taught at many other Universities around the world. In 2012, he was awarded the Philip Leverhulme prize for his seminal research. He is also a Laureat of the French Academy of Moral and Political Sciences (2005) and has received numerous prizes and scholarships for his research. He is co-editor of the Journal of Competition Law and Economics and of the Yearbook of European Law, both published by Oxford University press, the co-director of the Cambridge book series on Global Competition Law, Policy and Economics and sits at the advisory board of a number of Research Institutes in the area of competition law and policy around the world, as well as at the advisory board of the Journal of European Competition Law and Practice.