Finance for the climate: charting a complex relationship 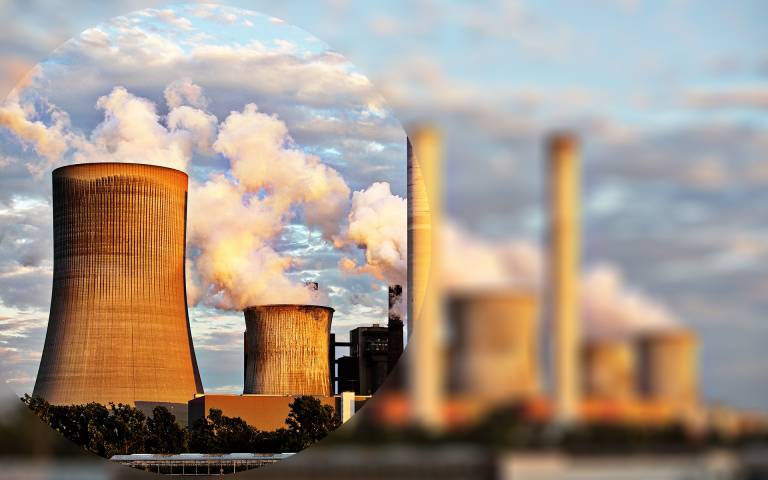 The complex interconnection between the global financial system and the climate crisis presents dangers, but also opportunities

The financial crash of 2009 dramatically demonstrated the interconnected nature of the global financial system. A downturn in the US housing market triggered a financial crisis that rippled across the globe incurring huge economic costs, bankruptcies and job losses. This is because flows of finance, from investors to investments, frequently cross national borders – disruption in one part of the financial system can quickly propagate to other geographically distant parts.

Now more than ever before the world is aware of another interconnected global crisis – the climate crisis. The impacts of human societies on the earth’s climate and ecological systems in one part of the world are cascading to other parts of the world with catastrophic implications.  For example, carbon dioxide emissions from highly polluting developed economies in the global North contribute to rising global temperatures that increase the likelihood of drought and crop failures in the global South, affecting vulnerable countries with historically low carbon emissions. The impacts of the climate crisis are currently being felt disproportionately by those who have contributed the least, bringing issues of social justice to the fore. 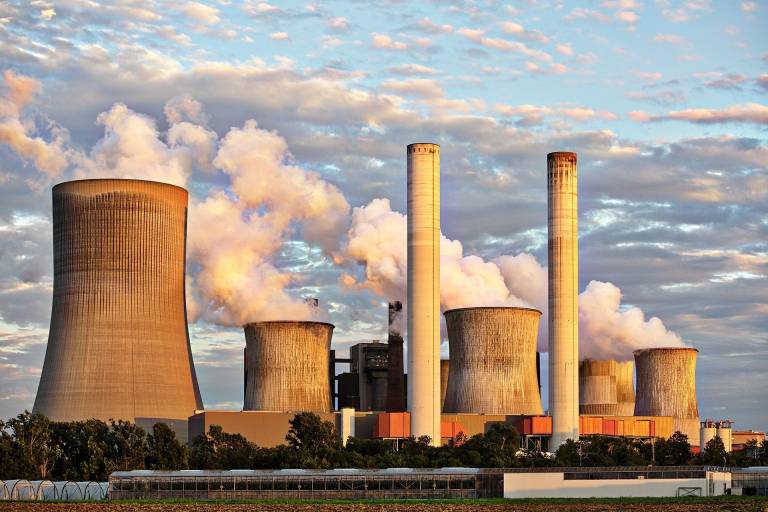 Image by Benita Welter from Pixabay

On the other hand, the global financial system is crucial to combating climate change and this presents great opportunities. Huge investments of money are needed to cut greenhouse gas emissions and adapt to the impacts of climate change that can’t be avoided, and this investment can be provided by the global financial system. Finance will be the driver that pivots economies away from highly polluting activities and towards clean and sustainable development. The Paris Agreement, unanimously adopted in December 2015 by 195 countries, marked a breakthrough in recognising the role of financial institutions in the global fight against climate change. Article 2.1c of the Paris Agreement declares that signatories must make ‘finance flows consistent with a pathway towards low greenhouse gas emissions and climate-resilient development’. Furthermore, the global nature of the climate crisis requires global solutions, and the global financial system will be crucial to delivering these. During the recent US-hosted Leaders’ Summit on Climate, governments discussed the need to mobilise public and private money in order that no one is left behind [1]. This is reflected in Article 9 of the Paris Agreement which stipulates a transfer of financial resources from developed to developing nations must take place. The inter-linkages of the global financial system can be the conduit for this redistribution of resources.

Image by Erich Westendarp from Pixabay

Climate change poses two key types of risk to the financial system: physical risk and transition risk. Physical risk refers to the impact of the changing climate on things and people. For example, the unprecedented severity of the California wildfires in 2018, exacerbated by climate change, are estimated to have cost over $100 billion in damages. Additional costs due to the destruction of homes and infrastructure, health costs and the disruption of business, brings the total economic loss to roughly 1% of US annual GDP. This economic blow propagated outside of California too, resulting in indirect losses of $40 billion to the rest of the US. Transition risk refers to the consequences of a rapid shift in the value of polluting assets that result from rapid changes in climate policy. For example, if government policies were to align with the Paris agreement stipulations on carbon emission reductions, two thirds of the world’s fossil fuel reserves could not be burned. The resulting rapid drop in the value of fossil fuel assets held by banks and insurance companies could destabilise the financial system, potentially leading to dangerous ripple effects, as happened in the 2008 financial crash. The problem is that financial actors such as banks and insurance companies often work to short-term targets which ignore the long-term consequences of their actions for future generations. As former Bank of England governor Mark Carney explained ‘the catastrophic impacts of climate change will be felt beyond the traditional horizons of most actors – imposing a cost on future generations that the current generation has no direct incentive to fix’.

In addition to managing these climate-related risks, the financial system must also provide the investment and resources that will put national and global economies on a pathway to zero carbon emissions. A vast amount of ‘climate finance’ must be mobilised to do this. For example, doubling the share of renewable energy in the global energy mix by 2030, which will be crucial to cutting carbon emissions, was estimated to require an annual investment of $770 billion between 2016 to 2030. With the costs of renewable energy declining at impressive rates, rapid progress is being made in this direction. However, progress has been uneven and some parts of the global South are being left behind (see map below). 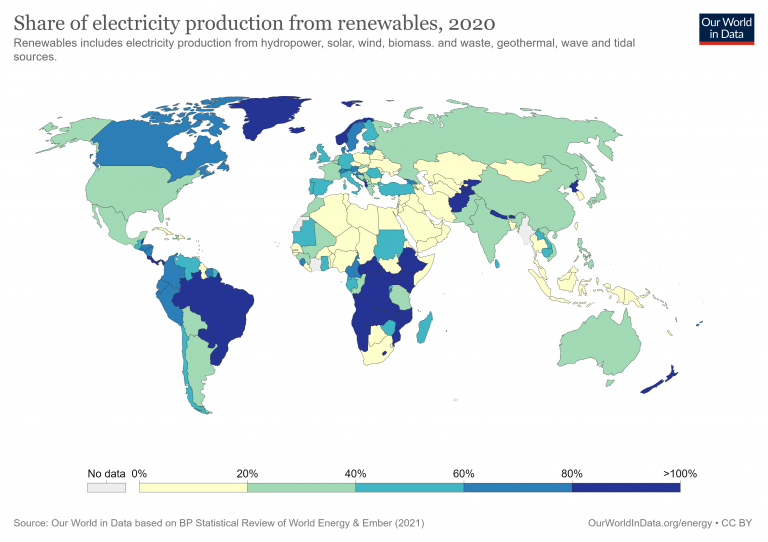 Share of electricity production (%) from renewables in 2020. Source: Our World in Data.

Focussing solely on increasing the volume of climate finance is therefore not sufficient – the (crisis that rich nations, who bear the most responsibility, have so far been less impacted by its consequences than poorer countries who have contributed the least. A just and equitable solution to the climate crisis requires that rich countries help poor countries, both in adapting to the adverse effects of climate change and in sustainably developing their economies. In light of this, developed country signatories to the Paris agreement pledged to provide $100 billion annually to developing nations in order to tackle climate change. Critically, this transfer of resources must take place fairly, without raising the public debt of already vulnerable nations. Large-scale low-carbon projects financed by national and multi-lateral institutions are one direct way of transferring resources, but alternative approaches exist which help avoid low-income countries becoming dependent on technological and financial resources from donor nations. For example, micro-credit schemes supply small loans to community enterprises and can help generate wealth at the local level.

Identifying the ways in which the changing climate can affect the financial system through their many complex interconnections is a huge challenge, but it is essential if we are to predict and prevent financial disasters. Both researchers and policymakers are developing new and sophisticated tools which embrace this complexity. On the policy side, financial supervisors and regulators have joined together to launch the Network for Greening the Financial System (NGFS). The NGFS has developed novel tools to help private and public institutions identify climate-related risks and the channels through which they can propagate. ‘Climate stress-testing’, for example, employs network models in which financial institutions are linked together in an interacting web through investments and economic ties. External ‘stresses’ such as a change in climate policy are then applied to the network model to understand how the system responds. Ultimately such tools can be used to help policymakers transform the financial system so that it becomes more resilient to climate-related stresses and shocks.

Researchers in academia are also pushing forward the use of network models. Network models are being developed to explain how a dynamic and evolving financial system emerges from the interactions between individual economic agents. Such models can detect the groups of influential investors and their investment patterns that are most effective at transferring capital to where it is needed, and such findings can act as a guide for policymakers. This type of thinking will be critical to the equitable distribution of climate finance across the world. In order that the pledged $100 billion a year from the developed to the developing world reaches the most vulnerable and is distributed fairly, it is vital to monitor the financial channels through which it flows and its impact on the economies of recipient countries.

A long way ahead

From the policy and research perspective, network science as applied to the financial system and climate-related risks is still in its infancy. We currently have limited knowledge of how climate impacts propagate through the financial system. Which climate disasters could trigger a financial collapse? Which investments suffer the most from rising temperatures? Where will these impacts be felt? We also have a limited understanding of investor decision-making, which is driven by an array of socio-economic factors. Why do investors decide to invest in one technology and not another? How do they choose which country to invest in? These are just some of the questions that researchers are currently exploring.

Furthermore, data on financial transactions and investments are often confidential and this presents a challenge to researchers seeking to build realistic models of the financial system, limiting their ability to provide decision-makers with real-world future scenarios.

The climate crisis poses an existential threat. There is an urgent need to transform economies and the financial systems that underpin them in a way that values the natural world and mitigates climate change. Governments are making positive commitments; Europe has launched the European Green Deal, the US has rejoined the Paris Agreement and China recently announced its target for zero-carbon emissions by 2060. Businesses and institutions are also beginning to engage with the problem;  the Climate Action 100+ initiative is led by a group of investors, managing $54 trillion in assets, who aim to put pressure on the most polluting corporations to cut their emissions and disclose the true environmental costs of their activities.

The use of network-based methods, capable of capturing the complex interactions between the climate and financial systems, will be key to accelerating these efforts and enabling the design of effective policies and financial system reforms. This approach is a new frontier of ‘complexity science’, the study of large systems of many different and interacting components. Complexity science flourishes when researchers from disparate disciplines come together, sharing insights and finding commonalities in the complex systems that arise in biology, physics, economics and the social sciences. The Global Research Alliance for Sustainable Finance and Investment (GRASFI) is one such multi-disciplinary venture, linking together a network of universities and research centres.

It is also essential that researchers work alongside investors and financial regulators. Examples of such fruitful collaboration already exist, for example, the Principles for Responsible Investments (PRI) unifies academics, policy-makers and financiers under a United Nations program to help investors match their profits with socio-environmental gains. Finally, the NGFS represents a perfect example of collaboration between industry and academia and uses the combined expertise to make change at the financial regulatory level.

Complexity science, such as network-based tools, can help us to understand the finance-climate system, mitigate these risks and seize the opportunities. It is the time to embrace the complexity of our world, rather than oversimplifying the picture. To quote Stephen Hawking, this is “the century of complexity”. This global effort will require collaboration between businesses, governments and researchers around the world. While the challenge is huge, the first steps are already being taken. 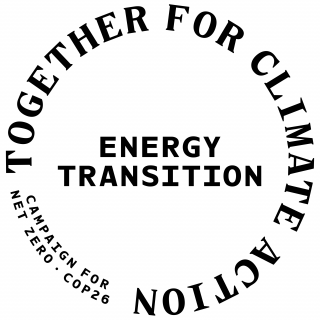