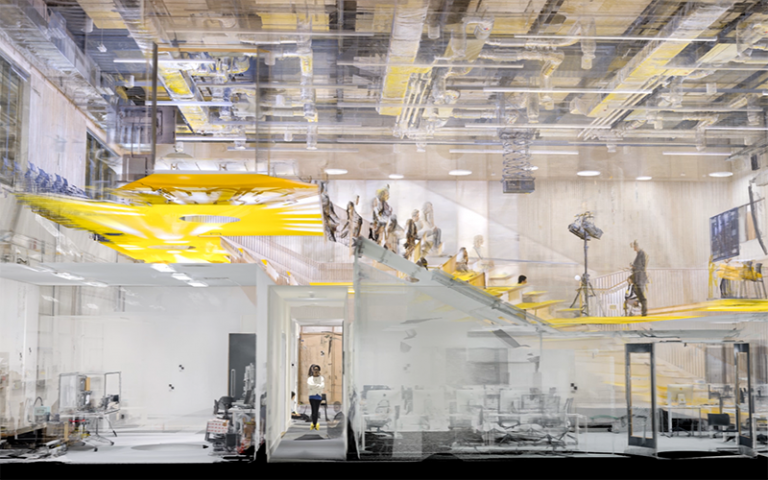 The film shows the transformation of UCL’s 6,000 sqm space at Here East, which features a 330-seat multi-functional auditorium and a 2,000 sqm robotics and advanced prototyping space developed with UCL Robotics Institute. It allows us to see the diverse range of acitivities taking place in the teaching and studio spaces, workshops and laboratories, with staff and students working with robots and fabrication equipment, as well as environmental chambers and test rigs.

ScanLAB used large-scale 3D scanning technology, and had unlimited access to every studio, lab, lecture room and cupboard, allowing them to capture a total of 225 scans across a week of scanning.

The result is an amazingly detailed digital replica of UCL's new Here East campus, capturing a cloud of over 11 billion precisely measured points and assembling them into a virtual model. Each scan had an average of around 50 million data positions.

The Bartlett and the Faculty of Engineering Sciences expanded into premises at Here East on Queen Elizabeth Olympic Park in early 2018, designed by leading architects Hawkins\Brown.

Pascal Wyse, who composed the soundtrack for the film, captured a range of sounds from the space. He explains how this gives the film a flavour of the building:

All spaces have a unique sound, a mix of their acoustics and the activities that take place within their walls – from the minute gearings of 3D printers to blasts from bigger robots and the murmur of distant seminars reverberating in the large open spaces. Some of that appears in the soundtrack untreated, just to set the scene, but other sounds are "musicalised", turned in to beats and repeating patterns that help drive the music along. It's a very high-tech place, but it has soul, and hopefully the music helps tell that story.“

Founded in 2010 by Bartlett graduates Matthew Shaw and William Trossell, ScanLAB Projects specialises in exploring the use of large-scale 3D scanning for architecture and the creative industries and has become one of the UK’s pioneering agencies in the field.

The latest stories from across The Bartlett faculty