Professor Alan Penn, current Dean of the Bartlett Faculty of the Built Environment, will step down from the role at the end of this academic year following two five-year terms – the maximum allowed by UCL. 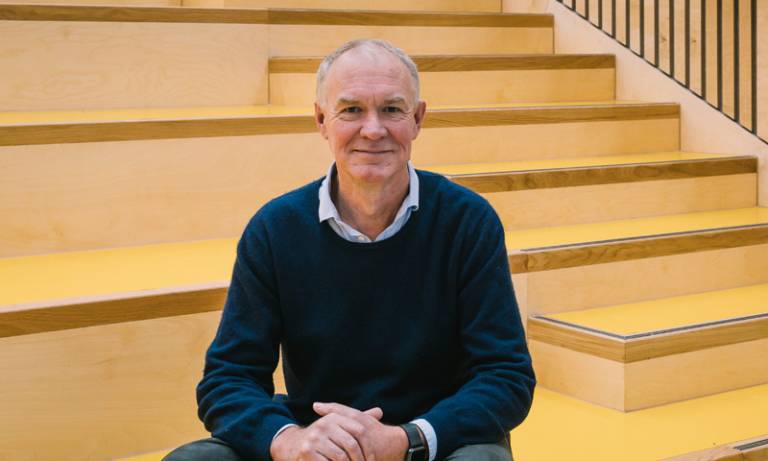 During his ten years in post, Alan has directed the Bartlett Faculty through major organisational change, transforming it into a faculty of thirteen schools and institutes deeply engaged with developing new thinking about the built environment in the 21st Century.

Under his tenure, the Bartlett’s study programme has doubled, from 36 to 77 different programmes with over 3000 students, and overall the Faculty has grown five-fold in terms of income and over six times in terms of staff numbers. To accommodate this growth, the Bartlett estate has developed from 5,500m2 to 14,000m2, including the refurbishment of 22 Gordon Street and launch of the Here East facility on the Queen Elizabeth Olympic Park. Accelerate, the pioneering education and mentoring programme aimed at increasing diversity in the architecture profession, was also established during this time.

“Being Dean of the Faculty of the Built Environment (known to us as ‘The Bartlett’) is a truly unique role. In recent times, The Bartlett has grown to become the most comprehensive built environment faculty in the UK, recognised worldwide for the quality of its research, teaching and external engagement. The Bartlett has the capacity to profoundly shape the way people around the world perceive and interact with the built environment. The Dean not only leads this vibrant academic community, but also plays a key part in the UCL Provost’s Senior Management Team. ​​​​​

Over the past decade, Prof Alan Penn has set a high bar for his successor. His clarity of vision, his deep connection to UCL’s founding values and radical tradition, and his nimbleness in the face of challenges and opportunities have guided The Bartlett through a complex decade of transformational growth. He has encouraged and enabled his faculty colleagues to fulfil their potential. His commitment to cross-disciplinary collaboration – within the faculty, across UCL and beyond our university – has inspired UCL to be more than the sum of its parts and positioned The Bartlett as a reliable source of wise counsel on how humanity can and should use the environment it shapes. His successor will have a wonderful opportunity to build on this success and to continue the innovation which has seen the UCL Faculty of the Built Environment establish itself as a world leader in the field.

Alan will return to the Bartlett following a year’s sabbatical to continue his work as Professor in Architectural and Urban Computing in the Bartlett School of Architecture’s Space Syntax Laboratory. His research will focus on understanding the way that the design of the built environment affects the patterns of social and economic behaviour of organisations and communities.

He will also continue in his role as a founding director of Space Syntax Ltd, a UCL knowledge transfer spin out with a portfolio of over 100 applied projects per year, including whole city masterplans, neighbourhood development plans and individual buildings. Alan said:

“I have been lucky to have been Dean at a time when the central importance of the built environment to the future of society and the planet has started to be understood. UCL has invested heavily and the Bartlett is now a research and educational powerhouse. We attract some of the best staff and students from around the world and working with them is truly inspiring.

The trick in all of this is to make the whole greater than the sum of its parts, and that is something at which UCL excels. For the future we need to ensure that the professionals and researchers we educate have an understanding of their responsibilities to the public at large and future generations, and truly reflect the diversity of the population for whom we plan and build. This is an area where the Bartlett has a duty to show leadership.

In March 2019 it was announced that Professor Christoph Lindner will succeed Alan Penn to become the 14th Dean of the faculty when he officially takes up the post on 1 September 2019.