Co-hosted by House of Vans and The Bartlett School of Architecture, the 'Pushing Boarders' conference took place in London on 1–3 June 2018. 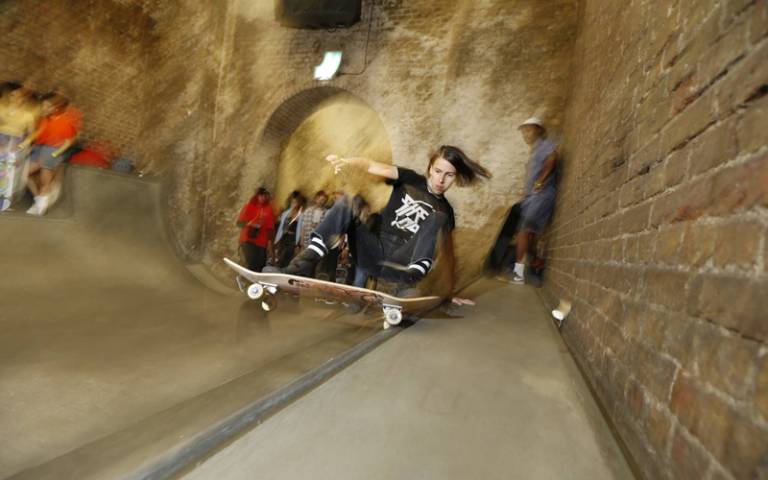 The origins of Pushing Boarders

Pushing Boarders was the concrete outcome of a couple of years of planning, researching and skating – and what a journey it has been.

For my PhD, begun in September 2014 and completed recently, I studied how skateboarders in Seoul, South Korea, negotiate urban space. It was a great, but largely solitary experience. Globally, there are pockets of great scholars working on skateboarding, and Iain Borden has been a supportive supervisor, but it isn’t a subject always taken seriously in academic contexts. My research has been dismissed during multiple academic conferences, as some scholars still consider it not worthy of academic inquiry.

But such views could not be further from the truth. One only has to look at the skate schools in Palestine and Afghanistan, created by SkatePal and Skateistan respectively, or at the genderqueer and ungendered initiatives by Doyenne, Heavy Discussion and Skateism. Skateboarders are taking important and progressive socio-political stands by founding grassroots movements, charities and magazines.

Skateboarders do think and write critically about skateboarding, and so I considered it vital to both celebrate and critically reflect on these skater-led developments, if only to encourage young scholars to take part in this small, but growing, field of research.

So, when Thom Callan-Riley started his PhD project on nostalgia in skateboard culture, in the autumn of 2016, it was only a matter of time before we co-founded Re-verb Skateboarding and started planning a small event on diversity within skateboarding. Initially, this was in collaboration with Sheffield Hallam’s Dani Abulhawa and with support from our supervisor Iain Borden.

In 2017, we teamed up with Theo Krish and Philip Joa from SkatePal and Stuart Maclure from Long Live Southbank, with the aim of working towards an interdisciplinary and international conference on skateboarding, which became Pushing Boarders.

Our collective incentives for Pushing Boarders were crystal clear from the outset: we take a stand for diversity and inclusion within skateboarding. This is much needed in a scene that is, at times, progressive and supportive, but can also be homophobic, racist and socio-politically ignorant.

Topics up for discussion inlcuded gender-identity, skate-(un)friendly cities, regionalism, and racism. Our panellists took part in the most empowering, critical and challenging conversations about the current state of skateboarding. There were hurrays, smiles, hugs, kisses, misunderstandings, tears and clashes.

With more than 1,700 people signed up for tickets across the weekend, and each talk testing venue capacities, the panels provided key insights into the socio-cultural and political issues that skateboarders are facing. As Gustav Eden from Skate Malmö mentioned during the panel on the built environment:

Skaters are sometimes swept out, and other times are the broom to sweep out others like the homeless (…) There are almost no public spaces for women. If female skateboarding increases in popularity, city planning for skateboarding could pave the way for necessary intentionally inclusive spaces.“

Precisely by taking place in the public sphere, skateboarders are enveloped in the most pressing of issues. In panellist Marie Dabbadie’s words:

Skateboarding is widely not respecting of women and transpeople, like [Thrasher’s King of the Road] harassing women in the street. We need allies. More importantly, we need counterculture in skateboarding (…) I want skateboarders to question themselves. It is a radical practice, but it has been resting on its norm-breaking status instead of actually being norm-breaking. We need more women and queer stakeholders in skateboarding (…) Consider what it is like to be a female/queer skater.“

It is crucial that universities and public institutions take a lead in hosting these discussions, precisely because these aren’t always possible or encouraged elsewhere. And they do: we were so lucky to receive support from, inter alia, The Bartlett (UCL), Sheffield Hallam University, Lovenskate, Free Skate Mag, House of Vans, Free Movement Skateboarding, and Skateboard England.

We are also extremely grateful to everyone who came: our 25+ volunteers; our film crew; Iain, Bob, Alan, Emily, Don, Paul and Roberto at The Bartlett School of Architecture; our 56 panellists and chairs; post-conference skate sessions at Gordon Square and Southbank; media coverage by The Evening Standard, Free, Skateism, Time Out, The BBC, Jenkem, The Conversation.

Pushing Boarders was an experiment to initiate and continue critical conversations on the most prevalent issues in skateboarding today: we talked, we learned and we skated.