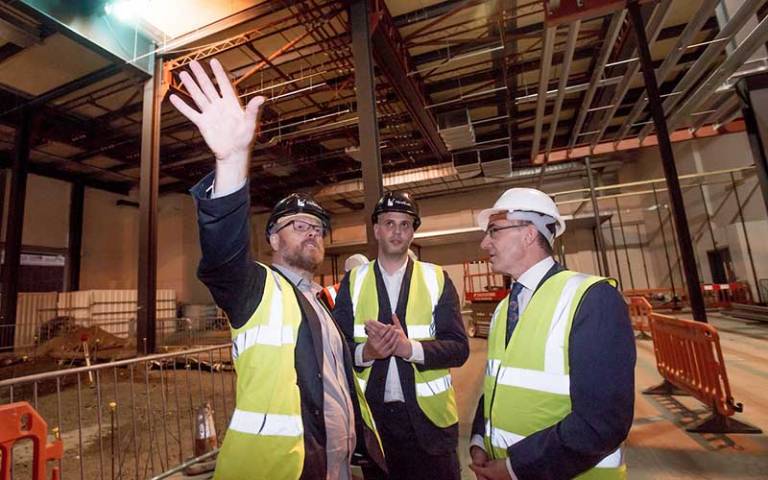 Introducing the event, Here East's CEO Gavin Poole spoke of the five-year "journey" in which the space had been transformed from empty warehouse to a digital university campus.

He highlighted the recent progress made in filling vacant space at the site, including the opening of an Innovation Centre - opposite UCL's space - with room to house "dozens" of tech start-ups.

Poole said that 4,000 people would be based at Here East by the end of 2017, many of whom would come from the local area. Forty-eight per cent of Here East's workforce lives within 10 minutes walk from the site.

The main UCL Here East unit will focus on teaching, learning and research space. This includes an event/exhibition space and studio space while housing numerous chambers for research and a large-scale area for robotics for the School of Architecture.

From September 2017, UCL Here East will also be home to the new Bartlett Real Estate Institute. The institute will rethink the traditional view of real estate, taking a multidisciplinary approach to identifying, researching and solving real-world problems.

The Dean of the Bartlett, Professor Alan Penn, outlined the process by which UCL ended up choosing the site. While it was once expected that the future of Built Environment studies would be digitally-focused - with students and researchers clustered around computer screens, rather than physical projects - the increasing importance of robotics to the industry now meant the opposite was becoming true.

Penn added that a "whole realm" of environmental testing chambers would be available at the site - allowing for real-life testing of how environments and people respond to changes in temperature, light and other external factors.

The site would present "revolutionary" opportunities for UCL to deliver training across professional boundaries and encourage creative collaboration.

Stuart Robson, UCL's head of Civil, Environmental & Geomatic Engineering, echoed Penn's enthusiasm for the project, highlighting how the Here East site represented a "fantastic opportunity ... to build a community on UCL's interdisciplinarity and breadth of vision".

Hawkins\Brown's Euan MacDonald then delivered a presentation on the architecture firm's vision for the site, illustrating how the "grey and white box" of the vacant Olympic Park Media Centre was being "transformed" into a rich, diverse, digital space.

MacDonald said it had been a hugely challenging building to work on, particularly with its lack of natural light, but by separating it out into designated spaces Hawkins\Brown had been able to deliver an exciting and innovative space that represented a "natural alignment" between the goals of Here East and UCL. 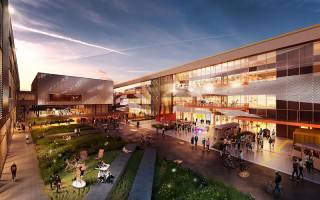 Find out about our new, East London campus