The PROCOL UK team present on the key findings and recommendations from IGP’s think piece 'Unleashing the power of data to drive shared prosperity: A roadmap to a transformative data society' 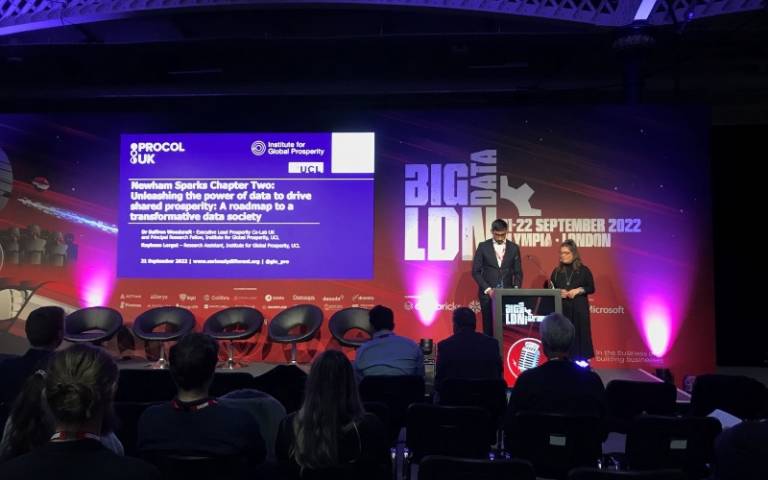 On 21 September, Dr Saffron Woodcraft and Rayhaan Lorgat (PROCOL UK) delivered a presentation on the key findings and recommendations from IGP’s new think piece 'Unleashing the power of data to drive shared prosperity: A roadmap to a transformative data society' (pdf).

The piece forms part of Chapter Two of Newham Sparks. Since the summer of last year, the IGP has been collaborating with the London Borough of Newham to support the Newham Sparks initiative which was launched at London Tech Week in September 2021. Newham Sparks is an ambitious initiative to incubate and grow London’s ‘Data Sector’ in the borough, and to bring significant socio-economic benefits for local citizens, not just through the conventional ways such as business and job growth, but also through greater prosperity and improvements in quality of life, including enhancing democratic participation.

IGP’s presentation took place at the Big Data LDN Conference held at Olympia London, and was part of a wider keynote session on, ‘London – The Global Capital of Data’. The event included an opening by Chair Omid Shiraji (Consultant CIO at Westminster Council) who asked AI some questions around the data sector. Global Futurist Rohit Talwar (CEO, Fast Future) presented a futuristic outlook of data, as he explored how the evolution of data and the power attached to it could change the fabric of society and redefine what it meant to be human - bringing both massive opportunities and potentially existential risks. Theo Blackwell (Chief Digital Officer for London, Greater London Authority (GLA)) introduced some of the work the GLA has done in the last few years around open data, the London Data Store and highlighted the soon to be launched ‘Data for London board and platform’.

The think piece sets out new research and thinking about the potential scale of the Data Sector in Newham, London, and the UK. It examines the scope for inclusive economic growth and job creation and looks at the possibilities and challenges of building a data sector that is fair and inclusive. It covers education and skills training needs; the social value that data can generate for citizens and communities; and the levers available to local government to bring their vision to fruition in the upcoming years. The aim is to inform and influence wider national and regional policy that will drive the growth of the Data Sector in Newham, in London as a city, and the UK as a whole.

While the team presented the regional and local economic opportunities of the data sector in terms of the open data market size, employment potential and GVA, they strongly emphasised that the true value of the data sector will rest on addressing the following questions:

Consequently, the team introduced IGP’s conceptual policy framework ‘Citizen’, ‘City’ and ‘Champions’ from the piece that helped shaped the thinking as to how we can capture the value of data across the public, private and commercial domains. ‘Citizen’ is the effects of data on individuals and what data can do for citizens and societies, or data as a public good. ‘City’ refers to the implications and role of data for places – cities, boroughs and networks of communities – and for the governance of places to ensure the data sector offers inclusive and transformative benefits. The ‘Champions’ lens frames the opportunities for entrepreneurial innovation in data such as individual skills, community data-use collaborations, and private sector co-ordination. ‘Champions’ are ultimately the people and organisations that will create new forms of value from data.

Based on this conceptual policy framework and the levers available to the London Borough of Newham, the team concluded the presentation by outlining IGP’s five key recommendations for Newham:

The Mayor of Newham, Rokhsana Fiaz concluded the keynote session and responded to IGP’s recommendations by introducing Newham’s ambition to launch a data campus in East Ham. Based on conversations with audience members, these recommendations seemed to be gaining traction and will hopefully just be the start of Newham Sparks flourishing.

Read the think piece on the Newham Gov website (pdf)