Meet Dr Kate Maclean who will join the Institute for Global Prosperity in August as Director of Education. She tells us why she is excited to join the IGP, what she is most proud of and what prosperity means to her. 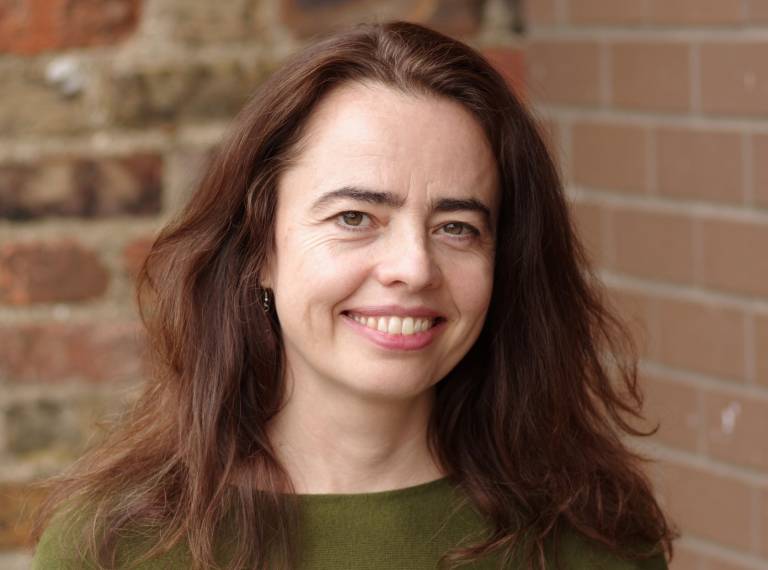 “As Director of Education my role is to ensure that our brilliant, diverse, highly qualified and experienced students are fully engaged in the research community at the IGP. We will learn as much from them as they will from us.

Can you tell us a little about your background?

I started my academic life with an undergraduate degree in philosophy from Edinburgh (1997). I then relocated to Bangkok, where I taught gender studies and ethics at an American satellite college, before moving to Barcelona for three years.  In 2003, I returned to university – York – to take an MSc in Gender and Development and then a PhD.  My PhD involved long-term fieldwork in an Inter-Andean valley in Bolivia – which meant I needed to change my Barcelonan Spanish quite radically!  After my PhD, I moved to London for a lectureship at King’s College London in 2008, and have been in academia ever since, with a senior lectureship at Birkbeck and a professorship at Northumbria, before returning to London to take up the position at the IGP.

What excites you about working at the IGP

I am delighted to be joining the IGP.  I have covered a range of topics in my academic career – gender and microfinance, popular markets and ‘informality’, pop culture and financial crisis, urban violence and governance - but the common thread through all of my work is reimagining the economy and the political processes needed to bring about transformation – exactly what the IGP sets out to do.  The work of colleagues at the IGP covers such a range of topics – debt, climate, populism, conflict, entrepreneurialism, psychoanalysis, urban innovation – and I’m particularly struck by how engaged the research environment is;  so much collaborative work across disciplines and beyond the normal bounds of academia.  I’m particularly excited about the collaborations with artists – the current exhibition at the Barbican is wonderful.  As Director of Education my role is to ensure that our brilliant, diverse, highly qualified and experienced students are fully engaged in the research community at the IGP. We will learn as much from them as they will from us.

What does prosperity mean to you?

Prosperity is a wonderful word – it’s so much more than just wealth or any notion of ‘development’ or ‘modernity’, both of which have become inextricably linked with economic growth.  It has implications of satisfaction, good fortune, and fulfilment.  In the Andes they’d call it Suma Qamaña – living well – a worldview that takes at its starting point a relational idea of the self, and equates the good life with living reciprocally with community, culture and nature.  I’d add the importance of hope and peace.  One of the possible etymological routes of prosperity is from spere – to hope, and have ones hopes fulfilled.  My first book was based on work in the city of Medellín, Colombia, with civic and community leaders who had worked together to reduce the astonishing rate of violence the city had experienced in the 1990s, and one of the key political slogans underpinning their approach to city governance was ‘from fear to hope’.  Creating and enabling spaces in which hope is possible - where people can feel safe, recognized and affirmed – is the challenge of these times, during which the multiple threats and crises can seem relentless.

Could you tell us about one of the current projects you are working on?

I’ve recently completed my monograph Pluri-economy: Clothes, cash and construction in Bolivia.  This book offers a gendered analysis of ‘pluri-economy’ - the concept at the heart of Bolivia’s Movimiento al Socialismo’s (MAS) mission to overthrow neoliberalism and decolonise the economy, based on the Zapatista notion of plurality – ‘a world in which many worlds fit.’  In it, I bring together my work on gender and livelihoods in Bolivia – which has looked at rural credit, contraband in used clothes, Aymaran fashions, and, most recently, the changes to urban space brought about by the rise of the ‘indigenous bourgeoisie’.  The economic strategies employed by women working in Bolivia’s popular markets as they travel from community rural production to competitive urban commerce represent a reinterpretation of key terms which have demarcated value - production, nation, scale, reciprocity, and exchange.  In the process of negotiating the pressures of tradition and modernity, they are re-mapping assumptions about gender and indigeneity that are present in both orthodox and critical economic theories..

What professional achievement or initiative are you proud of?

Throughout my career I’ve been involved in networks of researchers focused on gender and feminism – I was one of the co-convenors of Gender Matters @ King’s at KCL, Director of Birkbeck Gender Sexuality, and am currently Chair of the Gender and Feminist Geographies Research Group of the Royal Geographical Society.  I have absolutely loved working with feminist colleagues across a range of disciplines – from fine art to business, theatre to psychiatry.  Such networks are an important source of support in the university, for both established and early career researchers, as well as a wonderful way of developing new ideas and collaborations.

Who is influentual to you and why?

My most important academic influence would have to be the work of feminist geographers JK Gibson Graham (aka Julie Graham and Katherine Gibson – they amalgamated the name to get away from the hierarchies of academic publishing).  Their 1996 book, The end of capitalism (as we knew it), changed the field and has really helped me frame my own work on economic plurality, resistance and diversity without losing sight of persistent social patterns of oppression and exclusion.

Do you have a recent book, film or podcast that you would recomment?

I watch far too many films!  I tend to fall in love with them and watch them over and over again – I think I’ve seen the 1985 film Brazil over a hundred times (lots about credit, autonomy and modernity in there…).  I also got strangely obsessed with films about the financial crisis which resulted in an article in Journal of Gender Studies.  But I’d say one of the most impactful films I’ve seen recently is The man who sold his skin.

Where is your favourite place?

I have been fortunate enough to live and work in some of the most exciting cities in the world – Paris, Bangkok, Barcelona, Edinburgh, Medellín and not least London!  But my favourite has to be La Paz, Bolivia – a really dynamic and beautiful place.  I love the markets there, and the fiestas – which feature parades of folkloric dances that have huge historical and political import – are an absolute marvel.