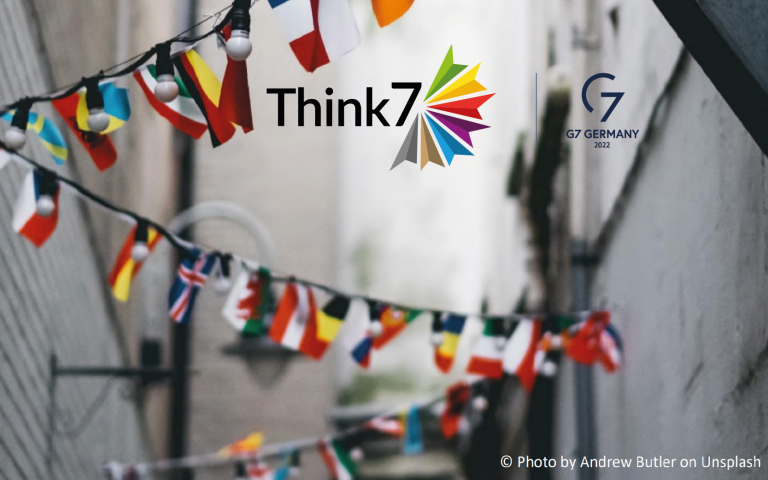 To overcome the major challenges the world is facing today – from recovering from the pandemic to mitigating climate change – the global community will need concerted, transformative policy efforts, aligned with collective values and societal goals (Think7, Call to Action)

From January 2022 to May 2022, Institute for Global Prosperity (IGP) Director Professor Henrietta Moore, has been playing an integral role in the Think7 process, as an expert advisor for the Think7 (T7) Task Force on ‘social cohesion, economic transformation and open societies’. The Task Force has been providing innovative research-based policy recommendations to support the German G7 presidency, to be held 26 – 28 June 2022, in Elmau, Germany.

In January 2022, five Task Forces were constituted to cover the key priorities of the German G7 presidency, including the Task Force on social cohesion. The Task Force has been co-chaired and managed by Professor Henrietta Moore (Director and Founder, IGP), Dennis Snower (President, Global Solution Initiative), and Franco Bruni (Vice President, Institute for International Political Studies). Throughout the process they have been responsible for managing the discussions and outputs of the Task Force, which has included numerous publications and a detailed issue paper outlining their key recommendations on social cohesion.

You can read more about the Task Force and its outputs here.

A new conception of prosperity, along with a related comprehensive yet concise set of goal post indicators, are needed... (Think7, Call to Action)

As part of the 70+ policy briefs and five issue papers contributing to the T7 process, the IGP have produced four policy briefs based on the key themes of IGP's work & research. These include:

The IGP’s research on these themes has directly fed into the following four Policy Briefs, contributing to the T7’s suite of publications:

You can download all the publications from the ‘social cohesion, economic transformation and open societies’ Task Force here.

The T7 Summit marked culmination of the four-month long process, including numerous Task Force group meetings, such as the Global Solutions Summit held in March 2022. On the 23rd and 24th May, the T7 Summit took place in Berlin, where over 300 participants, including the IGP, provided key policy recommendations from the Task Forces extensive suite of outputs for open discussion with fellow T7 members and policymakers.

On the 25th of May, one month before the G7 summit is held in Elmau, Germany, the T7 Communiqué was handed down to the German Chancellor, Olaf Scholz. Co-authored by over 300 researchers, including Professor Henrietta Moore and the IGP, this major output and achievement from the T7 Summit features the IGP’s policy briefs and the Task Forces issue paper. In turn, it represents an exemplary outcome for the Institutes impactful research and sees many of the IGP’s core research themes directly influencing the G7s agenda.

You can read the full communiqué here.

A Call for Action.

G7 countries should Implement a new concept of prosperity and progress.

At the IGP we are not waiting for things to change, we are driving the transformations that will shape tomorrow. Alongside more than 20 members of the Think7 group, we have called upon the G7 to begin systematically measuring progress through internationally comparable, multidimensional metrics that cover social well-being, economic well-being, and environmental sustainability.

This call has been published as an open Call for Action which you can read here.

Join us in supporting and rethinking prosperity fit for the 21st century.

The IGP has been honored to be part of the Think7 process, from co-chairing a Task Force, to publishing research-based policy recommendations to critically change the conversation on social protections and prosperity. This is undoubtedly one of the most pressing and challenging issues facing our geo-politically contested world today, and we look forward to seeing how these actions are taken forwarded in informing an impactful G7 presidency in June 2022.