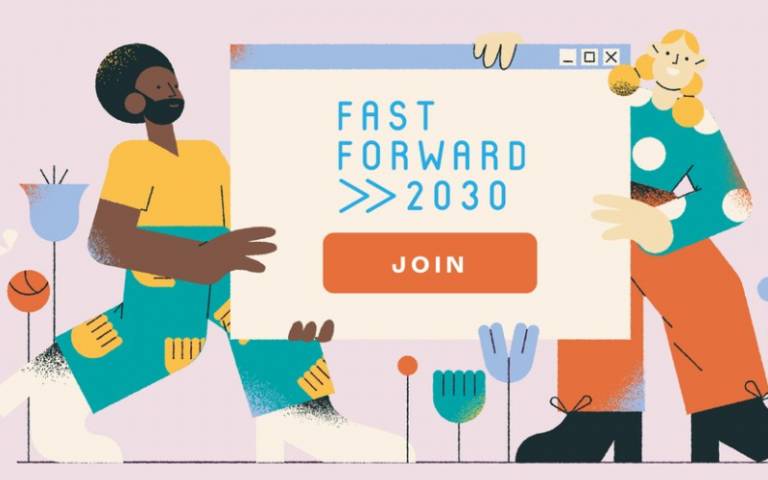 Achieving the Sustainable Development Goals (SDGs) by 2030 will require a concerted effort from everybody on the planet but while governments, large organisations and big business inevitably have key roles to play in this, critical contributions will come from the growing number of small, fast-moving, innovative organisations that are springing up all over the world. To harness and maximise these contributions, Professor Henrietta L Moore established Fast Forward 2030, a network of London-based entrepreneurs hosted by UCL Institute for Global Prosperity (IGP).

Professor Moore launched Fast Forward 2030 in partnership with one such entrepreneur, Arthur Kay (Bartlett School 2013), Chief Executive of bio-bean, a biofuels and biochemical company that recycles waste coffee grounds. Arthur co-founded bio-bean in 2013 while a student at UCL, with support from UCL Innovation & Enterprise.

Through its research, website and workshops, Fast Forward 2030 provides space for policymakers, entrepreneurs and citizens to share and collaborate on new projects and solutions to ecological and social problems.

In partnership with Goodsted, a platform for social and environmental collaboration, Fast Forward 2030 London hosted its first virtual interactive event to support entrepreneurs during the peak of lockdown. At the event, attendees were able to learn from and be inspired by entrepreneurs from the Impact Founders community and got a chance to participate in contributing to social and environmental impact by sharing their skills to help. They were able to listen to the stories of four social entrepreneurs and founders, hearing about the challenges they’d been facing.

Talks were followed by virtual brainstorming sessions where the audience contributed ideas for creative solutions and strategies, which ranged from social media and branding to brainstorming community visions to help adapt and build back better following the pandemic. The entrepreneurs’ projects covered a range of challenges in several countries such as water scarcity in Palestine, the refugee crisis in Africa and Pakistan, and staying safe during the pandemic in the United Kingdom.

Fast Forward 2030 London was founded in 2015 and following its success, the organisation has gone on to launch networks in Lebanon and Africa. Fast Forward 2030 Africa's inaugural event took place on 2nd October 2020 and brought together change-makers from across the continent to co-create business solutions that convert waste to value. Fellow impact entrepreneurs from Lebanon and the UK joined for a series of talks from leaders in the sector.