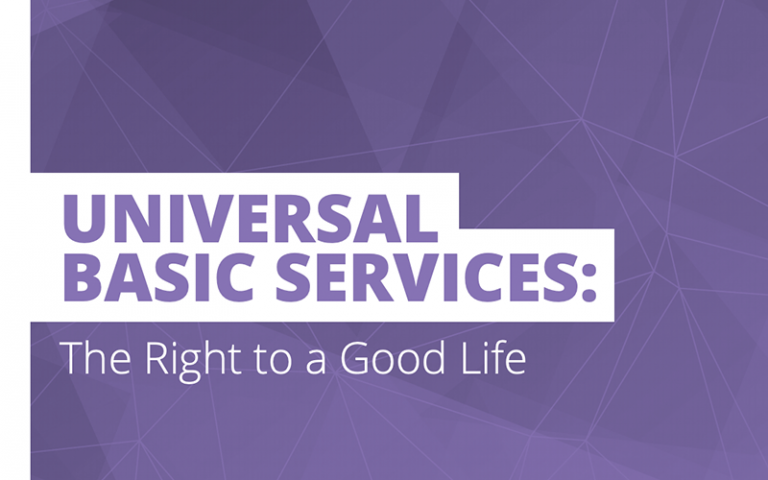 The Labour Party’s adoption of key elements of the Institute for Global Prosperity’s proposal for Universal Basic Services can help renew the UK’s social contract in the age of automation, its originators have said.

Following the launch at the Labour Party Conference in Brighton on Monday 23rd September, of a new report entitled ‘Universal Basic Services: The Right to a Good Life’, Institute for Global Prosperity director, Professor Henrietta Moore, said the move showed “a commitment to enhancing the living standards of millions in an increasingly insecure economic climate”.

The Labour Party’s report, announced by Shadow Chancellor John McDonnell in his conference speech today, praises the work of the IGP in developing the proposition for Universal Basic Services, concluding: “Universal public services, free at the point of use, will be one of three central pillars of the economic programme of the next Labour Government. Alongside the other two – structural reform to create good jobs, reduce the cost of living and broaden ownership and democracy and social security to provide a cash safety net for those who need it – universal public services are how we will create an economy that serves us instead of making us its servants.”

Universal Basic Services (UBS) is a radical proposal to extend the principles behind the NHS and public education to provide a range of other essentials free at the point of need. Its key aim is to reduce the burden of costs borne by individual citizens to achieve a basic standard of living, thereby increasing their wellbeing and ability to participate in society. It would build an increased sense of social solidarity by reducing inequality and stop individuals and communities from feeling ‘left behind’ in the face of economic challenges.

The Labour Party report adopts some of the IGP’s recommendations, which in full include a massive expansion of social housing, free bus travel, meal provision for those most at risk of food insecurity and basic phone and internet access. The total cost of £42bn – representing just 2.3% of UK GDP – could be fully funded through changes to the Personal Allowance, making the proposal fiscally neutral.

The Institute for Global Prosperity has more recently suggested ways of extending UBS to cover social care for the elderly and free childcare provision. Both ideas have since been adopted as official Labour policies.

The services themselves might be provided publicly, by private companies, or by the voluntary sector and would need to be democratically accountable locally to prevent state monopolies.

Those in the lowest income decile would benefit the most – saving the equivalent of £126 per week in costs as a “social wage” if they accessed all the Basic Services. A “social wage” is the value of a public service to an individual citizen, expressed as replacement for financial income.

Adopting the Institute for Global Prosperity’s vision for Universal Basic Services as policy represents a major step forward in renewing the social contract in the UK. It shows a clear commitment to enhancing the living standards of millions in an increasingly insecure economic climate.

Our ideas around UBS were developed in response to the changing realities of the modern economy. The livelihoods and life chances of millions of people are coming under increasing threat from rising costs for housing, food and other essentials. At the same time, too many are faced with insecure work, low pay and the prospect that their jobs and whole industries could disappear due to automation and technological change. Simply carrying on as we have before will not alter these trends.

UBS provides an affordable way for us to meet these challenges, providing an enhanced safety net that can simultaneously provide the foundations for full participation in our economy and stem the rampant inequality that’s eating away at our society. To operate effectively, we have outlined how it must go hand-in-hand with democratic accountability at local level. UBS must be an expression of our shared social needs, with communities themselves in control.

We already accept that certain services like health and education should be provided free at the point of use to the whole population, because we understand that all of society benefits as a result. The concept of UBS is a logical extension of this principle.

Andrew Percy, Director of the Social Prosperity Network at the IGP, added:

“At its heart our proposal for Universal Basic Services is about creating the conditions for ‘a good life’ that will allow communities and individuals to adapt to the climate emergency, and it is an important milestone that we have now have at least one major political party in the UK that understands and embraces the changes we will need to make in the coming years.

The Universal Basic Services (UBS) modelled in the report build on existing universal healthcare, education and legal services. They would enable every citizen to live a ‘larger life’ by ensuring access to safety, opportunity, and participation. Reducing the Personal Allowance to £4,300/year (leaving the current benefits system in place as is) would make UBS revenue-neutral and be highly progressive. 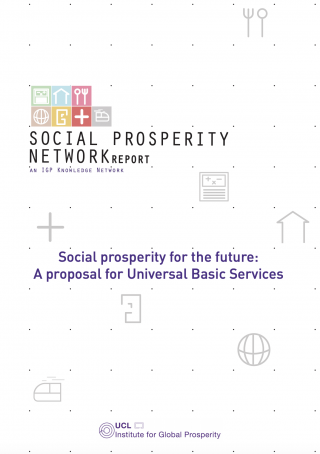